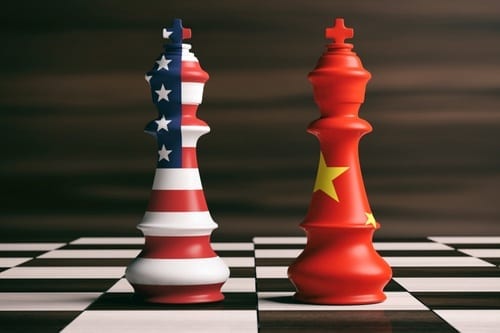 Here’s an overview of the main factors that impacted the rare earths market in H1 2019, and what’s ahead for the rest of the year.

While gold rising past US$1,400 per ounce and the Department of Commerce completing its uranium investigation was popular news over the last 6 months, one of the most exciting stories has been the concern over China limiting or impeding rare earth exports.

The group of critical metals has increasingly become a trade war pawn between China and the US, as the former dominates the market.

Investors may know what a bar of gold or a uranium fuel rod looks like, but rare earths (REEs), which are used in everything from smartphone cameras to defense systems, are much more prevalent in our day-to-day lives.

Even though the rare earth sector encompasses some 17 minerals, there are only a handful that are currently in demand. However, the less desirable elements continue to be mined and produced as a byproduct of the marketable rare earths.

In terms of production, China is by far the leader, dwarfing Australia — the second largest producer — by 100,000 metric tonnes (MT) annually. Chinese dominance in the sector has been a cause for concern recently, which was also seen in 2015 and 2010, when the Asian nation restricted exports, driving prices through the roof.

This trend was repeated in Q2 2019, although to a lesser extent than previous years, when China alluded to limiting exports bound for the US in retaliation to US President Donald Trump’s ever changing tariff list.

“Prices of some of the critical REE elements soared in Q2 from around mid-May to end of June 2019, likely as a result of the trade dispute between the United States and China,” explained Luisa Moreno, managing director of Tahuti Global.

Moreno remains optimistic in her belief that a US export limit is unlikely, but did note: “The visit of Chinese President Xi Jinping to rare earths facilities and talks about China changing its rare earths policies have created even more speculation about China counteracting the trade disputes by imposing rare earths export restrictions on the US.”

Fear that a rare earth shortage may materialize has been simmering on the back burner since late 2018, when China reduced export limits and implemented stricter environmental standards.

This concern was later exacerbated in the middle of Q2 when posturing by the US and China resulted in worry that China would cut off supply.

As the sector was plunged into speculation, shares of Lynas (ASX:LYC,OTC Pink:LYSCF) — one of the few rare earth producers outside of China — skyrocketed by 99.95 percent year-to-date on May 31, 2019.

However, it wasn’t all good news for the Australia-listed rare earth producer. In April, the company, which has mining operations in Australia and a processing facility in Malaysia, fended off an AU$1.5 billion takeover bid by Wesfarmers (ASX:WES,OTC Pink:WFAFF).

Lynas has also been dealing with tighter rare earth processing restrictions passed down by the government, some of which were aimed directly at the company’s Lynas Advanced Materials Plant.

“There are other companies willing to buy up or somehow or other acquire Lynas,” Malaysian Prime Minister Mahathir bin Mohamad said at a press conference.

“They have given us a promise that, in future, before sending the raw material to Malaysia, they will clean it up first, they will crack it and decontaminate it in some way with regard to radioactivity, so that when the raw material comes here, the volume is less and the waste from that raw material is not dangerous to anybody.”

Lynas is currently in talks to develop some rare earth processing capacity in the US, which could help the country in re-establishing a robust rare earth mining and processing sector.

All of this activity culminated in the US issuing a report calling on the Department of the Interior (DOI) to ramp up permitting for exploration and production projects.

“Thanks to President Trump’s leadership, today’s federal strategy lays out a blueprint for America to once again be a leader in the critical minerals sector,” DOI Secretary David Bernhardt said in a subsequent announcement. “As with our energy security, the Trump Administration is dedicated to ensuring that we are never held hostage to foreign powers for the natural resources critical to our national security and economic growth.”

Rare earths are some of the most in demand technology metals, crucial to the production of electric vehicles, as well as electronics, defense systems, alloys, lighting and aerospace systems.

“In just a period of decades, rare earth elements have seeped deeply into the fabric of modern technology and industry and have proven exceptionally challenging to duplicate or replace,” reads the Adamas Intelligence rare earth outlook for Q2 2019.

Calls for neodymium and dysprosium in particular are expected to outpace production by 2030, which is expected to create a supply and demand gap that will be hard to fill, with so few projects outside of China in production. A praseodymium shortage could materialize as well, since most light rare earths are mined together.

“Prices of the magnet elements praseodymium and neodymium fell during the first quarter due to low demand in China, but from about mid-May their prices increased significantly, likely as a result of the trade dispute,” explained Moreno. “Prices of neodymium increased by 40 percent from a low of about US$38,300 per tonne in mid-May to a high of US$53,800 in June. Praseodymium increased by 16 percent from US$50,600 per tonne to US$58,600, during the same period.”

The managing director of Tahuti Global also noted that all rare earths have not experienced the same price growth as the aforementioned ones.

“Not all rare earth prices trended the same, though; lanthanum and cerium prices have actually been weaker in most of Q2, showing lower prices in May and June relative to April. In contrast, the heavy elements dysprosium and terbium have shown a month-over-month increase since the beginning of the year. Dysprosium prices were 34 percent higher in Q2 relative to Q1, and Terbium 15 percent higher.”

In terms of supply, new mining and production projects are just the tip of the iceberg. There also needs to be substantial growth in the rare earth refinery sector outside of China, especially when it comes to heavy rare earths.

“There is not a lot of heavy rare earths refinery capacity outside of China. That’s really something China dominates and hasn’t really been addressed on a large scale yet,” explained Clint Cox, president of Anchor House, during a recent rare earths webinar.

However, all the talk and coverage of the sector has resulted in increased exploration activity, as well as a major merger.

In late June, diversified explorer Vital Metals (ASX:VML) announced it would be restructuring to focus on rare earths exploration in Canada and Tanzania. As part of the Australia-listed company’s efforts to gain a foothold in the sector, Vital will acquire private Luxembourg-based Cheetah Resources, a rare earths company founded by ex-Lynas management.

One of the projects Vital will obtain rights to is Avalon Advanced Materials’ (TSX:AVL,OTCQB:AVLNF) Nechalacho rare earths project located at Thor Lake in the Northwest Territories. The special deal will see Cheetah pay C$5 million to take ownership of the near-surface mineral resources on the property above a depth of 150 meters.

At this year’s Prospectors & Developers Association of Canada convention (PDAC), held every March in Toronto, INN spoke with Avalon’s CEO Don Bubar about Nechalacho’s potential and the disparity in the rare earths market.

“We almost got that project off the ground and took it all the way through feasibility and then of course the bubble burst in the 2012 timeframe so we’ve been sort of waiting for another opportunity for that demand to come back, and we knew it would happen sometime because that supply chain on rare earths never did get created in any real meaningful way outside of China,” said Bubar.

Mergers and acquisitions, as well as renewed interest in identified deposits, may be welcomed for the sector outside of China. However, as Luisa Moreno pointed out, there are few new deposits left to be discovered.

“Back in 2010 and 2011 over 400 REE projects had been identified. I don’t expect to see many new projects,” she said. “M&A’s may be positive though, if companies with good management, cash and expertise are able to consolidate some of the most advanced REE projects.”

For investors looking to get into the rare earth market ahead of a supply shortage or increase in demand, now may be the perfect time.

“It seems that the US government is planning to support the development of rare earths projects at home, as well as internationally in partnership with Europe, Canada and Australia,” explained Moreno. “If government funding is actually made available we may see a revival of some of the most perspective projects around the world. Investors should however be cautious because more funding does not equal success.”

“Higher prices are always good for project economics if they are sustainable. Particularly the price of magnet rare earths (such as Nd and Pr) for projects that have mostly light elements. Some of the rare earths companies have continued to develop their metallurgical processes, attention should be paid to those that have built sizable pilot plants or demonstration plants and may be receiving new funding and making progress.”