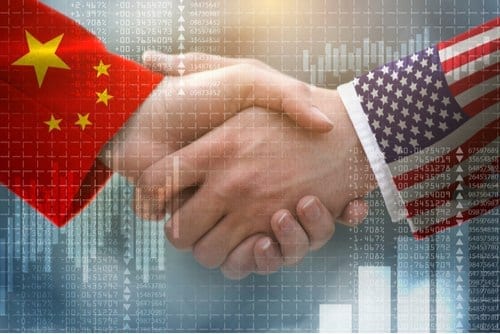 The trade war between China and US has brought rare earths into the spotlight again, highlighting the world’s dependency on the Asian nation.

As resources like coal that once fueled the global economy become obsolete, an array of new metals are quickly taking the stage as the future of the mining sector.

However, as nations around the world scramble to secure supplies of the metals they need, it has become quite apparent that it is not a level playing field.

The camera, speaker, battery, circuitry and the vibration technology all contain rare earth elements, and the vast majority of those rare earths, and all the other rare earths used in technological applications, come from China.

The recent and ongoing trade war between China and US has brought these commonly used metals into the spotlight again, highlighting the world’s dependency on the Asian nation to manufacture technological goods.

Because most rare earths are refined in China, the country has been able to dominate the sector, leaving other nations to try and build their own domestic rare earth mining and refining capacity. However, that is easier said than done.

One way to circumvent the mining and refining of rare earths is recycling. It is estimated that roughly 150 million cell phones are gotten rid of in just the US each year. Of that, less than 20 percent are recycled, creating a mine of rare earths that are basically ready to use but not being recovered.

The UK has decided to focus its efforts on capturing lost rare earths through a recently announced robust recycling initiative.

With an investment of 4 million euros from the EU, the University of Birmingham will set up a pilot facility to reclaim rare earth metals from discarded scrap. The move is part of the larger EU-funded Horizon 2020 project aimed at bolstering the European supply chain.

The project, dubbed the Sustainable Recovery, Reprocessing and Reuse of Rare-Earth Magnets (SUSMAGPRO), will primarily recycle magnets made of neodymium, boron and iron.

“These are found in hard disk drives, household appliances, electric vehicles and wind turbine generators, and are increasingly important in the transition to a green, low carbon economy,” notes the announcement.

However, recycling alone will not be enough to quench the appetite of the technology and electric vehicle sectors that use rare earths in abundance. Add to that the rare earths used in wind turbines for green energy and it’s easy to see why there has been so much concern over the Chinese monopoly.

But this isn’t the first time, nor is it likely to be the last, which comes as a shock to Dan McGroarty, a critical minerals analyst who has testified before the US House and Senate and is also the geopolicy editor for the Economic Standard.

He sees the same issues he spoke to 60 Minutes about four years ago coming back into play.

In fact, the situation is so similar, according to McGroarty, that the popular weekend newscast only updated the introduction and conclusion to his interview before airing the episode again on June 9 of this year.

“It seems to me to be obvious that this was a risk that needed to be addressed,” McGroarty told the Investing News Network (INN).

Potential rare earth shortages spurred on by China cutting or limiting supply first made the rounds in 2010 when a confrontation between China and Japan in the East China Sea prompted the former to reduce exports to Japan.

Needing the material for its high-tech manufacturing sector, Japan was at China’s whim, which caused Japan to invest in Lynas (ASX:LYC,OTC Pink:LYSCF) — the only significant rare earth producer outside of China.

Now, instead of dominating 95 percent of the market, China controls roughly 80 percent.

The trade situation between China and Japan highlighted the need for countries to create their own supply chain that wasn’t easily debilitated by trade winds, and the current threat that supply may be limited to the US has emboldened the charge, although for McGroarty it also reaffirms his stance.

“I’ve taken the position for over a year now that the trade war between US and China is one facet of a much more durable tech war underneath that and this tech war will define much of the 21st century and it’s going to be an enduring competition.”

According to the analyst, it all boils down to a simple question: “Which of the two large economies is going to dominate the technology manufacturing space in the 21st century? A part of that will be whether or not rare earths can end up being used as leverage.”

US President Donald Trump addressed the need for more domestic production and refining when his administration triggered Title III Defense Authorization, the alarm McGroarty has been ringing since he first spoke about rare earth embargoes.

“Not only just the extraction out of the ground in a clump but the separation and the processing into advanced rare earth materials. It’s really the whole bulk, it’s recreating the entire supply chain that’s required,” explained McGroarty.

It’s unclear whether the government will offer subsidies or other incentives, but they are bound to offer something to entice sector participants.

“Title III would open up everything from investments in facilities to long guarantees, to off-take agreements, futures agreements to buy specific rare-earths into the stockpile, for instance,” he said. “Any number of different tools would be at their disposal. Let’s see — and I think this is all happening for government with remarkable speed.”

As he mentioned, McGroarty sees the current rare earth predicament as only one cog in a now decade old tech war.

He suggests that investors look to applications that are in demand and going to become more ubiquitous and then work backwards in terms of what are their core materials.

The energy storage sector also relies on rare earths, which again underscores the importance of creating a domestic supply chain in every industrialized nation that plans to develop these technologies and applications.

“Depending on the hype that catches hold, scandium, which is the rarest of the rare-earths, shows up in some of the energy storage applications,” McGroarty said. “Where will that come from?”