Tshipi é Ntle Mining’s massive Tshipi Borwa open-pit project started up earlier this month. The mine could be a boon for the country — and investors. 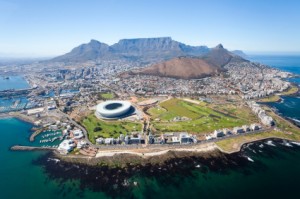 South Africa had both the world’s highest manganese production and the largest reserves of the metal in 2011, according to figures from the US Geological Survey. Much of that wealth is concentrated in the country’s Kalahari manganese field, located in the Northern Cape province.

The field is roughly 400 square kilometers and contains about 13 billion metric tons (MT) of ore grading between 20 and 48 percent manganese. That’s according to Australia-listed Jupiter Mines (ASX:JMS), a stakeholder in Tshipi é Ntle Manganese Mining, a joint venture that operates South Africa’s newest manganese mine, the Tshipi Borwa open-pit project.

The mine is located on the outer rim of the Kalahari manganese field. The company aims to produce 2.4 million MT of manganese ore grading 37 percent at the project annually over the next 60 years. The mine, which cost 1.7 billion South African rand (US$195.4 million) to build, started up on October 10, 2012, when the first ore was blasted at the site. “We are now firmly on the road towards producing our first revenue,” said Tshipi CEO Finn Behnken.

Tshipi Borwa is one of a number of new projects in the area. Others include Asia Minerals’ privately-owned Kudumane mine, which will produce 2 million MT a year when it reaches full production in 2013. As well, Kalagadi Manganese, a joint venture between ArcelorMittal (NYSE:MT) and South Africa’s Kalahari Resources, will soon start production at its Kalagadi manganese project. Over the next 18 months, this mine’s production is expected to rise to 3 million MT.

In addition to Tshipi Borwa, Tshipi é Ntle owns the Bokone property, also located in the Kalahari manganese field. Bokone is to the north of the producing Wessels mine, which is owned by BHP Billiton (NYSE:BHP,ASX:BHP,LSE:BLT). Wessels has been in operation since 1973.

Tshipi’s website indicates that diamond drilling has intersected high-grade manganese ore at Bokone, but the company has not yet outlined a resource. Tshipi used historical drill data on the property to identify high-potential drill targets in 2010. The website also states that six of the 10 holes it drilled intersected a range of manganese grades at depths of between 220 and 370 meters, with the strongest result so far being a measurement of 59 percent manganese over 0.5 meters.

Strong rail link on the way

Tshipi Borwa was in the news in September because the mine’s railway siding was the starting point for the first trial run of South Africa’s first-ever distributed power train for manganese. On September 17, the 2.23-kilometer train, powered by 18 diesel locomotives, carried 13,000 tons of manganese from Tshipi Borwa to Port Elizabeth. The ore itself was not produced at Tshipi, as the mine had not yet started up.

The new train is part of a massive transportation infrastructure plan by state-owned rail company Transnet to ease the bottlenecks and antiquated roads and railways that have long held back the country’s resource industry.

Transnet’s plan involves investing 300 billion rand ($35.6 billion) in new and expanded transportation infrastructure — including railways, ports and fuel lines, Bloomberg said. The initiative will double Transnet’s freight capacity within the next seven years; it also includes a new dedicated line to transport 16 million MT of manganese to the port of Coega, just east of Port Elizabeth on the southern coast.

“Access to cost-effective and -efficient rail transportation is crucial for South African manganese exporters to become and then remain globally competitive, because the costs associated with the resource industry went up quite significantly in the past five to seven years,” said South African President Jacob Zuma when he unveiled the plan in his February State of the Nation address.

How to invest in the Tshipi Borwa mine

Tshipi é Ntle Manganese Mining is 50.1 percent owned by Ntsimbintle NewCo, which, in turn, is 74 percent owned by Ntsimbintle Mining, a South African company that is held by a number of black economic-empowerment groups. South Africa’s Black Economic Empowerment policy aims to spur the country’s growth by encouraging previously disadvantaged groups to take a greater role in the economy, including managing and investing in South African businesses.

However, investors can gain exposure by purchasing shares of mining and metals-trading firm OM Holdings (ASX:OMH), which owns the other 26 percent of Ntsimbintle NewCo, Mining Weekly reported.

A more direct way of investing in the project is to buy shares of Jupiter Mines, which owns the other 49.9 percent of Tshipi é Ntle Manganese. Jupiter also owns 100 percent of the Central Yilgarn iron ore property in Australia, which consists of the Mount Ida, Mount Mason and Mount Alfred projects. Mount Mason has a measured and indicated 5.9 million MT of high-grade hematite (with 60.1 percent iron), while Mount Ida has an inferred 530 million MT of magnetite grading 31.9 percent iron.

Jupiter is backed by Pallinghurst Resources, an investment fund chaired by Brian Gilbertson, the former CEO of BHP Billiton.