A recently published report shows that manganese is one of several crucial metals headed for a tight supply crunch in the next few years.

Manganese is one of several crucial metals headed for a tight supply crunch, a recently published report says.
In the peer-reviewed paper, an international team of researchers led by Saleem Ali, a professor of energy and the environment at the University of Delaware, warns of possible supply shortfalls for manganese and other commodities, particularly those that have tech applications.
While manganese is primarily used in steelmaking, it is also used in the lithium-ion batteries that power electric vehicles. Demand for these cars is soaring, and as they become more popular the need for lithium-ion batteries and the metals used to make them is also expected to surge.


Grab Your Report
The paper lists South Africa and Australia as the sole suppliers of manganese brought into the US for use in lithium-ion batteries.
Last year, South Africa was the top manganese-producing country by a long shot, reaching total production of 4.7 million MT. Australia came in third place with total output of 2.5 million MT. 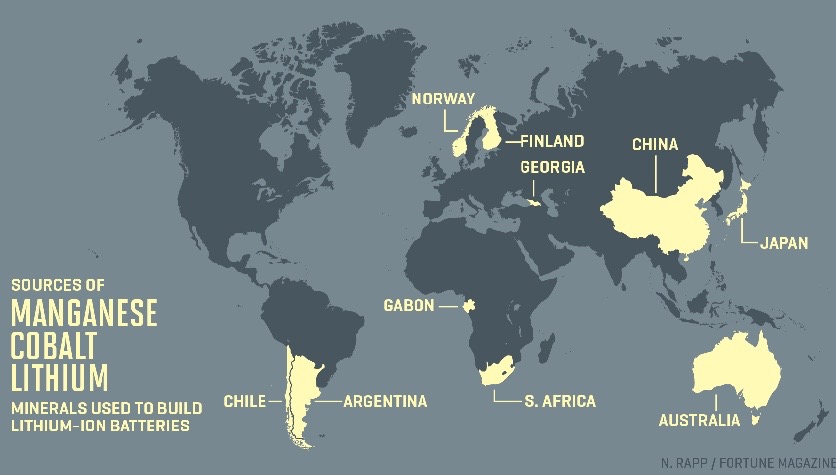 Map via Fortune.
The US depends 100 percent on manganese imports from these countries as it has no producing mines. It also has no official manganese reserves.

While some companies are exploring for manganese in the US and elsewhere, the study shows that exploration is not keeping up with future demand. It also indicates that recycling in and of itself will not be able to meet demand either.
After looking at projected demand for manganese and other minerals, the researchers believe that “much more investment in exploration is needed for supplies to keep up.”
Other metals listed as crucially needed in the future are cobalt, another component of lithium-ion batteries, and rare earths, which are used in high-performance magnets. Indium, tellurium and gallium are also listed due to their use in solar power technologies.
The international research team is calling for global resource governance and the sharing of geoscience data to address challenges facing future supply of those materials.
Ali’s team points out that if nothing changes, shrinking supply could cause prices for the listed metals to spike and lead to serious global challenges.
Don’t forget to follow us @INN_Resource for real-time news updates.
Securities Disclosure: I, Priscila Barrera, hold no direct investment interest in any company mentioned in this article.

2 responses to “Is a Manganese Supply Shortage on the Horizon?”