What happened in the lithium market this year? Here’s a look at the major lithium trends of 2017, from megafactory announcements to offtake agreements.

With the popularity of electric vehicles (EVs) growing at an unstoppable speed, lithium continued to be a hot commodity in 2017.
But what were the major trends in the lithium market? Here, the Investing News Network looks back at what happened in the space, including megafactory announcements and offtake agreements.
Read on for an overview of the factors that impacted the lithium market in 2017, from the main supply and demand dynamics to how analysts thought the metal performed in each quarter of the year. Overall, experts agree that the excitement seen this year is unlikely to let up. 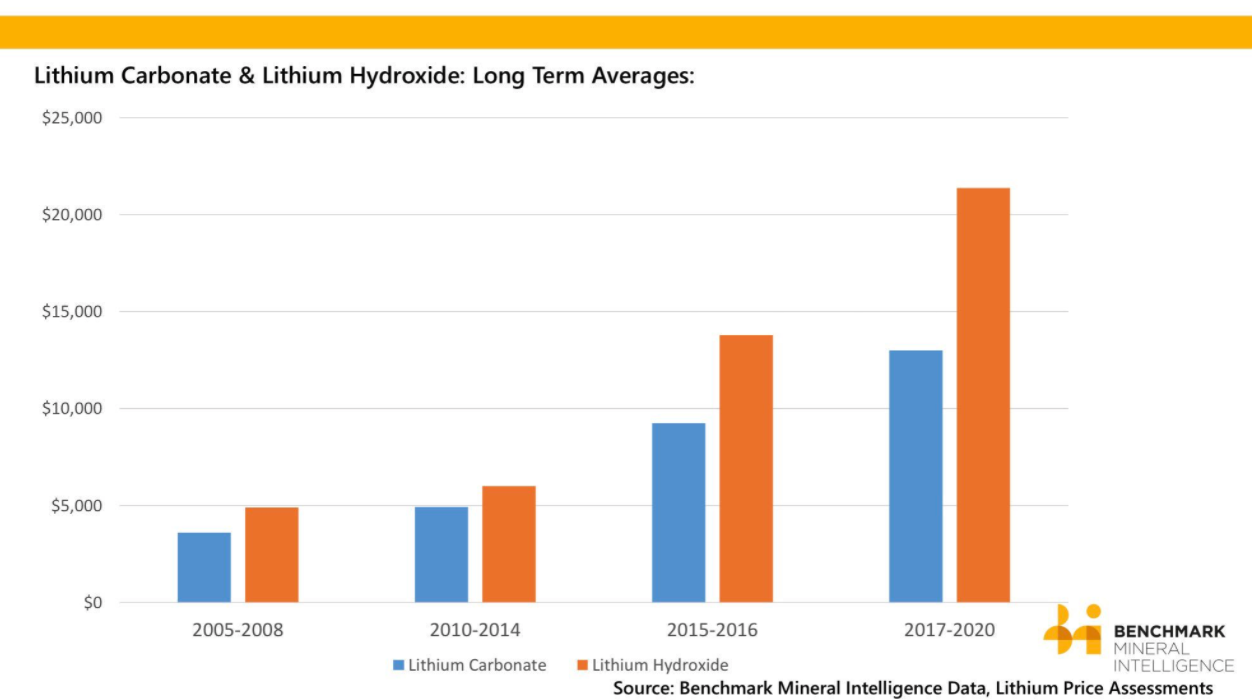 For the past three years, Tesla (NASDAQ:TSLA) has brought much excitement to the lithium space, and 2017 wasn’t an exception.
In January, the company started production at its Nevada facility, which is expected to produce 35 GWh per year of lithium-ion battery cells in 2018. During Q1, the Elon Musk-led company also announced plans to open two to three EV gigafactories by the end of 2017, boosting excitement among investors.

But as many analysts say, Tesla is just one story, and this year many carmakers started to outline plans to win a space in the electric car race. In fact, in Q1, analysts at UBS (NYSE:UBS) raised their forecast for global EV sales in 2021 to 3.1 million units from 2.5 million, and to 14.2 million units in 2025.

This surging demand for EVs is expected to push demand for lithium-ion batteries above 400 GWh by 2025, Benchmark Mineral Intelligence says. That means supply of lithium, a key component in the batteries, will need to reach 400,000 to 500,000 tonnes by the same year.
“There’s much more consensus on demand; we’re no longer even debating demand. We’re shifting to supply and whether, as an industry, we can deliver,” John Kanellitsas, vice-chairman of Lithium Americas (TSX:LAC), said earlier in 2017.
Most analysts agree that the world is not short on lithium. The “lithium triangle,” which overlays Argentina, Bolivia and Chile, holds 54 percent of the world’s lithium resources, which currently sit at a total of 14 million MT. But while reserves are large, bringing projects into the lithium market is not always easy; after all, it can take years for a new mine to be producing at full speed.
In Q1, China continued to be a key player in the EV space, in part due to environmental pressure. The government is pushing for all-electric battery cars and plug-in hybrids to account for at least one-fifth of its vehicle sales by 2025. China already produces 55 percent of lithium-ion batteries globally, and its share is forecast to grow to 65 percent, according to Bloomberg New Energy Finance.
“This is about industrial policy. The Chinese government sees lithium-ion batteries as a hugely important industry in the 2020s and beyond,” said Bloomberg New Energy Finance analyst Colin McKerracher.

In Q2, the market was flooded with news stories about electric cars and the huge amount of lithium demand that could hit the market in the next few years.
“The success of EVs will depend on our ability to deliver lithium to the world,” Lithium Americas CTO David Deak said at this year’s Benchmark World Tour stop in Toronto, adding that “the lithium market must grow by a factor of 20 for a world that runs on EVs.”
In fact, analysts believe that despite the world’s large lithium reserves there is not enough supply in the pipeline to satisfy the expected demand by 2025. “It is our expectation that the lithium industry will struggle to keep up with demand between now and 2021. [We don’t expect an] oversupply [in the market],” said Benchmark Managing Director Simon Moores.
Looking over to the major news stories in Q2, Argentina’s new mining deal, which could see its lithium carbonate output rise substantially by 2022, was one that impacted the market. If the new mining act brings the expected investments, the country could triple production in the next five years.
Lithium expert Joe Lowry said earlier this year that the country could develop two more world-class assets within the next four or five years. “Given the number of producers, and the relative ability to bring new production online, I believe that by 2021 or 2022, Argentina will be outproducing Chile,” he said.
Another big news story that hit the market in the second quarter was worries that Tesla might not be able to deliver its Model 3 on time due to a battery shortfall.
Moving into Q3, pricing in China was estimated to go up rather than down — back into the upper teens for lithium carbonate and slightly higher for hydroxide, both of which are considered battery-grade lithium, expert Lowry said at the time. “My “new normal” prices are $12-14/kg range for carbonate pricing and $18-22/kg for hydroxide,” he said in his Lithium Halftime report.

Similarly, Benchmark analysts said that the average global price of lithium carbonate rose by 9 percent in Q2, “led by pressures into the Asian battery sector in particular.”

At the beginning of the second half of the year, announcements from major governments hit the lithium market. France, the UK and potentially China all outlined plans to ban fossil fuel cars by 2040. Other countries have also set electric car sales targets or have hinted at bans on ICE cars in the coming years; such countries include Norway, Germany and the Netherlands.
In addition, several carmakers said they will electrify most of their models by the mid-2020s, including Volvo (STO:VOLV), BMW (ETR:BMW), GM (NYSE:GM), Mercedes, Dyson and Ford (NYSE:F).
Partnerships between major carmakers and Chinese firms were also a major trend during the quarter, with Renault-Nissan and Ford fighting for a place in the surging EV market.
In the third quarter, sales of EV and plug-in hybrid batteries exceeded 287,000 units, up 63 percent compared to the same period last year on the back of strong Chinese demand. That number is expected to increase significantly as the electric car revolution continues to unfold.
Another major news story in Q3 was producers’ long-term contract strategies. As mentioned, processing lithium for use in batteries can be challenging; as a result, producers are on the hunt for ways to ensure they have enough funding to meet future demand. Top lithium producers such as SQM (NYSE:SQM) and FMC (NYSE:FMC) are reportedly betting on long-term agreements to fund expansions.
In Q3, the London Metal Exchange also started to consider introducing a lithium contract to give investors exposure to growth in EVs. But expert Lowry commented at the time that even though he expects a lithium contract to be launched at some point, it is likely a few years off.

“[The] lithium market is still too small for the LME to implement a contract but there is no question that it is desired from by major purchasers,” he said in August.
In September, Australia-listed Kidman Resources (ASX:KDR) and Chile’s SQM agreed to form a joint venture to develop the Mount Holland lithium project. This type of alliance could be critical for lithium supply, Lowry explained in an interview earlier this year.
Later in the quarter, Volkswagen (FWB:VOW) said it was looking to invest $60 billion into electric car content, including batteries, and was aiming to sign supply deals for raw materials by the end of the year.
Before the end of Q3, Australian Pilbara Minerals (ASX:PLS) signed a lithium offtake deal with Chinese car manufacturer Great Wall Motor (HKEX:2333) to further develop its flagship Pilgangoora lithium-tantalum project. The deal was seen as a milestone in the space, as it was the first investment deal by an automaker into an upstream supplier of lithium raw materials. Until now, offtake agreements have in general been with chemical manufacturers and traders rather than carmakers.
After the news, lithium expert Chris Berry said security of supply is still underappreciated. “[It’s] going to be interesting to see how/if other automakers move to secure raw material access,” he added.

As the year comes to an end, many market participants believe 2017 has been the year of the electric car. But as carmakers realize how much supply is required, investments will be needed to ensure that lithium jumps from a niche market to mainstream, Moores said in an October interview.
Looking at major Q4 news stories, several companies started to show interest in a stake in SQM. The company has reportedly attracted interest from mining giant Rio Tinto (ASX:RIO,LSE:RIO,NYSE:RIO), China’s GSR Capital, Sinochem International (SHA:600500), battery firm Ningbo Shanshan (SHA:600884) and Tianqi Lithium Industries (SZSE:002466).
SQM is currently in a legal dispute over its lithium lease with Corfo, Chile’s state-run development agency; it may not be resolved until the end of 2018.
Another major news story in Q4 came from LG Chem (KRX:051910), which outlined plans to invest $1.63 billion to open the biggest lithium-ion battery factory in Europe. China currently leads in the production of EV batteries, but car manufacturers have been calling for Europe to start producing the batteries in order to remain competitive.
Benchmark is now tracking 26 battery cell plants that are expected to start production or expand capacity by 2022. In 2014, there were only three battery megafactories in the pipeline. “The combined planned capacity of these plants is 344.5GWh. To put that into perspective total lithium ion cell demand in 2017 is estimated at 100GWh,” but the industry needs to scale up, the firm said.
In fact, Cairn Energy Research estimates that lithium-ion battery demand will reach 750 GWh by 2026. And according to Benchmark, the increasing demand for raw materials key in batteries will see the need for lithium raise from 75,000 tonnes in 2016 to 550,000 tonnes by that time.
Interested in knowing what else happened in the lithium space this year? Check out our top lithium stories of 2017. And keep an eye out for our upcoming lithium outlook from analysts and companies.
Don’t forget to follow us @INN_Resource for real-time news updates!
Securities Disclosure: I, Priscila Barrera, hold no direct investment interest in any company mentioned in this article.
Editorial Disclosure: The Investing News Network does not guarantee the accuracy or thoroughness of the information reported in the interviews it conducts. The opinions expressed in these interviews do not reflect the opinions of the Investing News Network and do not constitute investment advice. All readers are encouraged to perform their own due diligence.