E3 Metals is excited to announce the addition of 5 new strategic Metallic and Industrial Minerals permits acquired directly from the Alberta government. 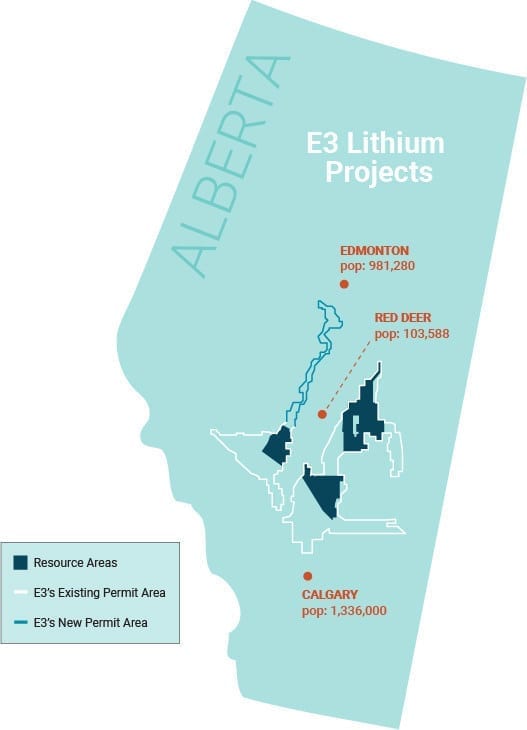 In conjunction with the Company’s ongoing development of its proprietary Ion Exchange Direct Lithium Extraction Process (DLE Process), E3 Metals is continuously evaluating additional value creation opportunities to grow its project base. The five new permits acquired have been under review for several years as they occur along the highly prospective “Meadowbrook-Rimbey” Leduc reef trend (see Figure 1). This area is an extension of E3’s existing Alberta Lithium Project, located just north of E3’s North Rocky Resource Area (NRRA) which hosts a lithium deposit of 0.93 Mt lithium carbonate equivalent (LCE) (see news release dated November 20, 2017). This prospective geological trend contains hundreds of wells that have been drilled to the Leduc reservoir, with many currently active today. Collectively, these wells are producing a combination of oil, gas and lithium enriched brine. Infrastructure along the trend presents abundant brine sampling and repurposing opportunities, which could minimize environmental impacts for a commercial lithium production project.

Historical data available from the Leduc Reservoir in this area indicates that the brine is enriched in lithium. E3 Metals plans to conduct sampling with several of our collaborative oil and gas partners to confirm the concentrations of lithium within this new area.

The Company also released 5 non-prospective Metallic and Industrial Minerals permits located at the south end of our permit area which were originally staked in 2017. Releasing the permits was part of E3’s strategy to prioritize areas with realistic commercialisation potential. E3 now holds a total of 591,144 ha or 1.46 million acres of Metallic and Industrial Minerals permits in Alberta.

E3 Metals is looking forward to an exciting year ahead. For a comprehensive overview of E3 Metals Corp., the Company welcomes investors to view the recent CEO interview with Chris Doornbos. E3 Metals was also recently mentioned in the Financial Times.

E3 Metals is a lithium development company with 6.7 million tonnes lithium carbonate equivalent (LCE) inferred mineral resources1 in Alberta.  E3 Metals is currently advancing its proprietary Ion Exchange Direct Lithium Extraction Process (DLE Process) in partnership with Livent Corporation under a Joint Development Agreement.  Livent is the world’s largest pure-play lithium producer, well-known for being one of the lowest cost producers of lithium carbonate.  With facilities across the globe, Livent holds technical expertise in the extraction and production of various lithium products. E3 Metals also continues to work with partners at the University of Alberta and at GreenCentre Canada.

Through the successful scale up its DLE Process towards commercialization, E3 Metals plans to quickly move towards the production of high purity, battery grade, lithium products.  With a significant lithium resource and innovative technology solutions, E3 Metals has the potential to deliver lithium to market from one of the best jurisdictions in the world.  The development of this lithium resource through brine production is a well-understood venture in Alberta, where this brine is currently being produced to surface through an extensive existing oil and gas infrastructure and development.  For more information about E3 Metals, visit www.e3metalscorp.com.

Chris Doornbos (P.Geo), CEO and Director of E3 Metals Corp., is a Qualified Person as defined by NI 43-101 and has read and approved the technical information contained in this announcement.