What’s the graphite outlook for 2018? Market watchers explain what happened last year and what factors to watch next year.

2017 started off slow for graphite, but heading into the new year analysts and companies are optimistic about the future.
While prices for lithium and cobalt have soared this year on surging demand for electric cars, prices for graphite, another metal used in the batteries that power these vehicles, have reacted less strongly.
However, by October prices were on the rise for the first time since mid-2016, according to Roskill. Fine flake graphite rose by 36 percent, the firm said at the time, hitting an average of $863 tonne, while medium-flake prices increased by 31 percent to reach $953 per tonne.

Give me my free report!
Fine- and medium-flake graphite are typically used to produce spherical graphite. Large-flake graphite is used in expandable graphite, and rose by 25 percent in October to average $998 per tonne.
Speaking more recently, Benchmark Mineral Intelligence analyst Andrew Miller said, “for the first time in over five years, we’re now seeing consistent increases in pricing due to supply-side pressures. At the same time, you have the emergence of new demand from value-added applications such as expandable graphite and spherical graphite for lithium-ion batteries.”
The chart below shows the latest graphite prices by mesh: 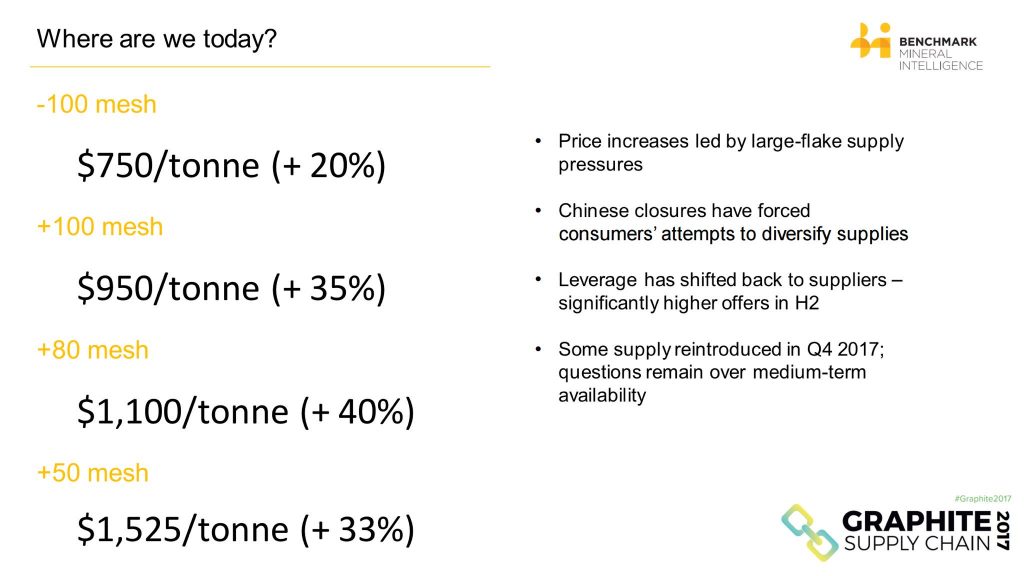 Miller said policy changes have been the largest drivers of the flake graphite market in 2017. “At the start of the year, China removed its export duty, which dragged prices to new lows,” he explained. “Subsequently, the environmental restrictions [China has] imposed on production have had the opposite effect. [That] has created some major challenges for the country’s producers moving forward.”
According to Industrial Minerals, the Chinese government removed graphite from its export tax list causing producers to drop their prices by 10-15 percent in January due to uncertainty over the cancellation of the 20 percent tax. It introduced an Environmental Protection Law at the end of 2016 to tax producers that flout environmental measures; which will come into force on January 1, 2018 but already began to have an impact on supply. The government also conducted a second round of inspections in Shandong province in May. These efforts to curb pollution led to reduced supply of needle coke, a key feedstock material used for manufacturing graphite electrodes.
Graphite electrodes are made from amorphous graphite, and are used within the electric arc furnaces of steel mills because they can withstand the high temperatures used to melt down and recycle scrap steel.
Refinery shutdowns along the Texas Gulf Coast caused by Hurricane Harvey in late August and early September also impacted US needle coke production. At the time, an unnamed steelmaking executive reportedly told Platts that the world’s largest graphite electrode maker, GrafTech International (NYSE:GTI), had declared force majeure in response to supply issues caused by the storm.
By late September, Chinese graphite electrode prices had increased nearly ninefold, to $16,330 a tonne, from the start of the year. Globally, spot prices had increased more, reaching about $35,000 per tonne.
According to an October report from investment bank Jefferies, the graphite electrode supply shortage could last five years or more. In addition to capacity coming offline due to Hurricane Harvey, 10 percent of needle coke output is now being directed to the lithium-ion battery sector.

In a recent interview with the Investing News Network, Eagle Graphite (TSXV:EGA) CEO Jamie Deith said graphite supply has been unable to keep up with “a global resurgence of steel production” in 2017.
Deith said he was informed by a Chinese supplier that “they may have absolutely no graphite available at any price for some of the standard grades. At the same time, Eagle Graphite is being approached by Chinese graphite buyers who can no longer meet their needs with domestic supply, and they think the Chinese government has made it too difficult to produce graphite in ‘the traditional way.'”
He continued, “requests to send Canadian graphite to China were unthinkable in the past, so I would say this is emblematic of change in the market.”
Blair Way, president and CEO at Leading Edge Materials (TSXV:LEM), said 2017 was a year of “healthy, steady growth” in the sector. He noted that a significant milestone for Leading Edge was the announcement of R&D projects in Sweden, including cooperation with the Northvolt battery cell manufacturing project. He said the company saw some “strong movement” in terms of its share price performance over the year “with the usual ups and downs as some investors took profit.”
“As we transition away from a traditional resource story to the technology and specialty value-added materials of the green energy space, some investors move on to the more volatile drill programs and others start to follow us to get exposure to the longer-term story around providing these specialty materials for the future green energy market,” Way commented.

In the long term, Roskill notes that the continuing closure of processing plants in China to curb emissions has set the scene for speculation about rising graphite prices. The research firm notes that “prices for high grade material [are] forecast to continue rising through late 2017 and into 2018 as battery demand continues to rise and flake graphite producers rush to ramp-up new production.”
Eagle Graphite’s Deith noted that governments around the world are considering banning cars with traditional combustion engines, and said that “yearly demand for graphite for batteries will go up from around 30,000 tonnes to as much as 60,000 tonnes over the next year. These are 30,000 tonnes of new production that need to come online just to prevent the market from going into further shortage.”

Get Your Free Report Now!
Deith also commented, “eventually batteries will come to dominate graphite demand, and global production capacity will have to grow to over 10 times its current size before the draw from battery production even begins to slow down.”
Way of Leading Edge said he anticipates “growing awareness and understanding of the graphite space” in the future, and added that “as new non-Chinese battery cell manufacturing ramps up in Europe and North America, they will be seeking out a sustainable non-Chinese graphite source for these materials. At present, Leading Edge stands alone as a source of value-added graphite in Europe.”
In 2018, he said the company will “undertak[e] a dual listing and look to gain greater exposure in the EU markets, which are very bullish on the specialty materials.”
Dr. Joseph Doninger of Focus Graphite (TSXV:FMS) suggested that “offtake agreements will make an appearance in the near future.” He noted, “I believe the trend will be to tie up high-grade sources of graphite from companies that have the technology to produce materials like silicon-enhanced spherical graphite for anodes in lithium-ion batteries and to modify high-purity graphite for use in battery cathodes.”
When asked which factors to watch in 2018, Miller said that “the developments in anode production capacity and the balance between natural spherical and synthetic graphite will be key for the market throughout 2018.” He also expects more announcements for anode megafactories looking to meet growing demand from the battery sector. China is “just beginning to restructure its flake graphite market, which will see production consolidated and focused in on key producing regions such as Heilongjiang.”
Miller also encouraged investors to look at “where new flake graphite production arises outside of China, and also the supply chain that develops between new anode megafactories and raw material suppliers.” In particular, he mentioned the ramp up of new projects in Africa, including Syrah Resources (ASX:SYR), which announced first production from its Balama project in Mozambique on November 24, 2017.
Don’t forget to follow us @INN_Resource for real-time news updates!
Securities Disclosure: I, Melissa Shaw, hold no direct investment interest in any company mentioned in this article.
Editorial Disclosure: Eagle Graphite, Focus Graphite and Leading Edge Materials are clients of the Investing News Network. This article is not paid-for content.
Editorial Disclosure: The Investing News Network does not guarantee the accuracy or thoroughness of the information reported in the interviews it conducts. The opinions expressed in these interviews do not reflect the opinions of the Investing News Network and do not constitute investment advice. All readers are encouraged to perform their own due diligence.