Here’s an overview of the graphite market in H1 2019 and what market participants are expecting for the rest of the year.

As the energy revolution continues to unfold, battery metals keep receiving a lot of attention, in particular lithium and cobalt.

Some market watchers are also optimistic about the future of graphite and its use in electric car batteries — at least for the next few years. Both synthetic graphite and natural graphite, in the form of the intermediate product spherical graphite, are currently used in the anodes of lithium-ion batteries.

What happened in the graphite market so far in 2019? Read on to learn about the main supply and demand dynamics in H1 and what market participants are expecting for the rest of the year.

One of the main trends in the graphite sector during the first half of the year has been the continued growth of value-added applications, in particular from the battery sector, Benchmark Mineral Intelligence Head of Price Assessment Andrew Miller told the Investing News Network.

“As with many battery raw materials, graphite finds itself in a transition period where new capacity has been installed, but the real major changes in demand have not yet been felt,” he said. However, he explained, there is still very good demand growth from the battery sector as well as from other value-added markets such as expandable graphite.

“The synthetic space has seen strong growth in China due to the lifecycle benefits that the country’s producers can obtain compared to spherical graphite. On the natural side, there is still major growth from battery markets, particularly in other parts of Asia where producers have overcome technical challenges using a natural-dominant anode blend,” the analyst added.

During the first six months of the year, both the synthetic and natural graphite sectors continued to be impacted by China’s environmental crackdown.

“The most direct effect on graphite has been in the natural graphite industry, where mined material undergoes high levels of processing to produce highly purified products such as spherical graphite for use in battery anodes, as well as expendable/expanded graphite for use in fire retardants and other applications,” analysts at Roskill said.

This processing method has come under major scrutiny in the past few years in the Asian country due to its use of large quantities of hydrofluoric acid and other strong reagents, with many mines closing after inspections and follow ups.

Supply constraints paired with increasing demand from the battery sector have helped natural graphite prices in the past few years, despite several rounds of downward price readjustments as plants have reopened, according to Roskill.

However, looking specifically at 2019, the main news in the graphite space has been the introduction of new supply, with massive investment done in recent years on the synthetic side to establish graphitization and carbonization capacity to facilitate more output, according to Miller.

Meanwhile, on the natural graphite side, major new volumes of feedstock have come from Africa, in particular from Syrah Resources (ASX:SYR,OTC Pink:SYAAF).

“This has seen a divergence in the pricing structures of flake feedstock and value-added materials, which have been relatively stable in comparison,” he added.

According to the expert, prices for feedstock have certainly come down as new supply has hit the market, but not as much as some have indicated.

“The major decreases some have reported are largely for fines or fake flake material, which has become increasingly prominent with increased supplies,” he said.

Benchmark Mineral Intelligence expects graphite prices to continue to decline into H2 as excess supplies remain in the market. 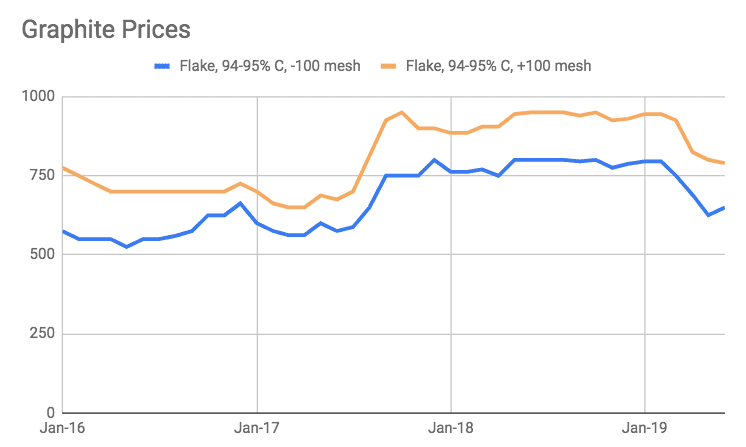 “The important point, however, is that the market structure is not the same across all flake graphite grades. There are still parts of the market that will be tight into H2, such as large-flake material for use in expandable graphite processing,” Miller said.

Benchmark Mineral Intelligence expects the anode market to grow from around 160,000 tonnes in 2018 to 200,000 tonnes in 2019. Further ahead, Roskill expects demand from the battery sector to account for about 45 percent of natural graphite demand and around 25 percent of total demand by 2028.

Prices have fallen significantly in recent months. “(However,) they have been kept high by rapidly increasing demand from the synthetic graphite electrode industry, as China shifts to higher levels of crude steel production via electric arc furnace (EAF) — a technology which relies on graphite electrodes,” the analysts added.

“Currently, 10 percent of Chinese crude steel is produced in EAFs, but this could double to 20 percent over the next decade,” Roskill analysts said.

As the second half of the year begins, there are several factors that could impact the graphite space.

For Miller, the main factor to watch out for in the medium term will be the speed of the introduction of new high-quality processing capacity to serve the battery market.

“This will be the big growth driver of the market over the coming decade,” he said. “The ability to ramp up new, high-quality and consistent supply will have a major bearing on the future direction of the anode market and the price of feedstock graphite material.”

Benchmark Mineral Intelligence expects the market to be oversupplied in 2019 and into 2020.

“From 2020 onwards, you will see much larger volume commitments from anode consumers, and this will help balance the market. However, these sectors can’t be looked at as one market. There are going to be differing balances for different grades as we enter this period of rapid growth,” he said.

The main challenge for the sector is investment in new, high-quality capacity, said Miller. That’s due to a lack of understanding of the complexities of the graphite sector and the oversupply in the market.

“In addition, creating capacity at a raw material and advanced material level outside of China is going to become increasingly important as we see battery expansions emerge elsewhere in the world,” he added.

According to analysts at Roskill, market watchers should keep an eye on further closures in countries outside of China, like India — a major manufacturer of graphite electrodes.

In February, pollution concerns led a court to rule on the closure of Graphite India’s graphite electrode plant in Bangalore, India.

Roskill analysts also said environmental protection in China is expected to be strengthened.

“(Our) research in China suggests that the government believes environmental protection not to be at odds with economic development. In fact, a large number of Chinese producers are now reporting higher profits, especially the loss-making state owned enterprises,” they added.

Investors who are focused on prices should pay attention to production developments around the world.

“With ongoing constraints to supply and rapidly rising demand, price development in the graphite industry will depend on the ability of new supply, increasingly that from outside of China, to meet the market’s needs,” as per Roskill.

Miller said investors should also keep an eye on the competitiveness of new flake supply out of Africa and how this will impact existing Chinese supply.

“It’s also important to keep track of the downstream developments both in anode and battery technology — these will dictate where new capacity is required and what type of graphite materials are targeted.”