Graphene could be used as a photocatalyst to create artificial photosynthesis systems that produce renewable, non-polluting fuels and chemicals. 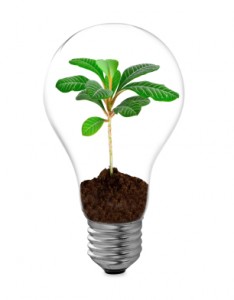 Wonder material graphene keeps surprising researchers with its seemingly limitless power. One of the newest applications for graphene, derived from graphite, is its use as an efficient photocatalyst — a chemical substance or material that accelerates a chemical reaction without being used itself.

In science education, we learned that the well-known photocatalyst chlorophyll captures light and aids photosynthesis, a process used by plants and other organisms to convert light energy from the sun into chemical energy used to fuel the organism’s activities.

A team of scientists from the Korea Research Institute of Chemical Technology have demonstrated that graphene may be able to improve the efficiency of artificial photosynthesis systems by serving as a photocatalyst.

That’s important because artificial photosynthesis systems could potentially produce renewable, non-polluting fuels and chemicals for a wide variety of uses. And until now, producing a solar-to-fuel conversion process has been both challenging and expensive.

Previous studies have experimented with graphene-semiconductor composites such as photocatalysts, but their efficiency was low. The new study used graphene by itself as a photocatalyst, which the researchers then coupled to a porphyrin enzyme.

“The researchers demonstrated that this material could convert sunlight and carbon dioxide into formic acid, a chemical that is used in the plastic industry and as fuel in fuel cells,” a report on the study states. “Tests showed that the graphene-based photocatalyst is highly functional in the visible light regime, and that its overall efficiency is significantly higher than the efficiencies of other photocatalysts.”

Jin-Ook Baeg, one of the researchers and a co-author of the study, said in an interview with Phys.org, “[t]he photocatalyst-enzyme coupled system is one of the most ideal artificial photosynthesis systems that utilize solar energy for the synthesis of various chemicals and fuel.”

Baeg added that the ability to produce solar fuel directly from carbon dioxide has applications related not only to fuel cells and plastics, but also to the pharmaceutical industry.

“As one of the strong practical merits of the system, it also can be used for the production of tailor-made fine chemicals using solar light energy,” Baeg said. “For example, chiral 2-amino-1-arylethanol derivatives are a very important intermediate of many kinds of very expensive chiral drugs. It can be easily synthesized by our photocatalyst-enzyme coupled artificial photosynthesis system simply using solar light energy.”

The hype about graphene and its applications — from desalinating sea water to telecoms to transistors to health — is gaining ground on a daily basis. But the reality is that the material — a one-atom-thick sheet of carbon that is many times stronger than steel and is a good conductor of heat and electricity — is still expensive to make and thus is currently used only in laboratories.

Focus Metals (TSXV:FMS), a diversified Canadian miner, has asserted that Grafoid, its 40 percent partner, is working on a process that will make graphene prices come down. Another miner, Northern Graphite (TSXV:NGC,OTCQX:NGPHF), said this year that it will supply extra-large-flake graphite to Grafen Chemical Industries, with which it also has a deal to develop intellectual property rights regarding graphene application.

In the meantime, a scientist working at the Nano Application Centre in Allahabad, India has synthesized graphene in the laboratory using a new, simple, cheap and time-saving method, Times of India reported, without giving any details on how he produced graphene or what the price implications are.

An Overview of Gold Investing and Prices
Northern Graphite’s Concentrates Easily Purified to Battery Standards
What Was the Highest Price for Gold?
Top Canadian Graphite Stocks