With the trade war hammering commodities prices, investors should keep an eye on zinc as global stockpiles shrink and supply dries up.

Zinc has so far been the hardest hit of all the base metals in 2018, with its value down over 32 percent year-to-date, even as global stockpiles in London fall towards the 200,000-tonne mark.

Cormark Securities mining analyst Stefan Ioannou told the Investing News Network that when it comes to commodities, thanks to the trade war there is a ‘call me when things get better’ attitude in the markets. “They’re all trading down, copper being just as notable,” said Ioannou.

“A lot of that stems back to … the trade war narrative we’re hearing about between the US and China, and the US and other groups, [and the] concern that has created with regards with near- to medium-term demand,” Ioannou explained.

“That’s had a huge impact on prices — prices were actually rallying going into the early summer, and that’s when the trade war narrative really picked up. It’s spooked the general investor for sure.”

Copper is down over 19 percent down year-to-date, as is lead. While nickel is almost unscathed compared to the others at US$12,230 a tonne — down 3.54 percent as of Monday’s LME prices.

“I think you could argue to a certain extent that zinc had quite a good run early — so if anything it may have got a bit ahead of itself,” said Ioannou. 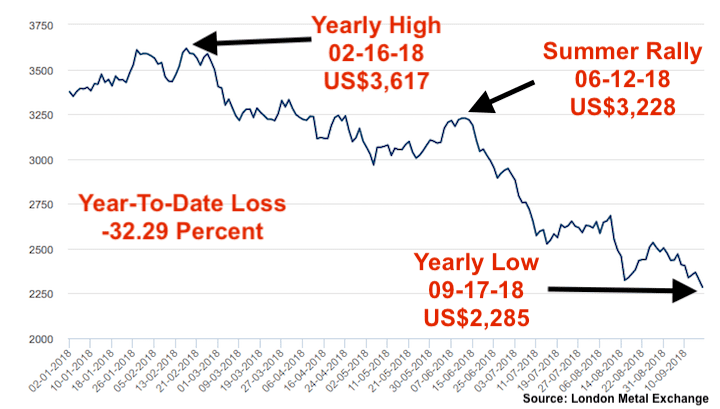 “That’s not to say I don’t think the medium-term outlook for zinc is still very strong. I think we hit a high of $1.60 [around US$3,600 a tonne] or so — I don’t think that was a ceiling, but I think we hit $1.50 sooner than people expected, and so the correction was that much more severe with the trade war.”

Ioannou said that when it comes to the zinc story and what is affecting the metal’s price besides the trade war, it is really all on the supply side of the equation.

“It’s really a lack of supply thats stands to really bolster prices here in the near to medium term,” he said.

He used MMG’s (HKEX:1208) Century zinc mine in Australia (since reopened as a tailings reprocessing project), which provided 4 percent of global supply, as a primary example of a large mine winding down.

“When you add them all up you’ve got something like 10 or 15 percent of the world’s supply [that] has come off over the last couple of years. The flip side of that equation is there just hasn’t been a lot of big-scale development in the zinc space. Not a lot of discoveries, not a lot of big projects getting pushed forward,” commented Ioannou.

“So the writing’s on the wall here: we’re losing supply and there’s no new supply coming in to replace it. That’s really setting up for a supply crunch,” he said.

Demand on the other hand is “more a passenger”, said Ioannou, who added that moderate 2- to 3-percent growth in demand shows little sign of abating in the face of developing economies and modernizing economies.

On top of traditional demand sources, which include galvanized steel, he said that zinc has new spaces where demand could grow, including batteries. “But I think it’s still early days there,” he said.

“I think one of the interesting things is looking at zinc in terms of the fertilizer market. China for example has realized that adding a little bit of zinc to fertilizer can boost crop yield significantly, so they have mandated that use of zinc in their fertilizers, so it is a significant new demand for the metal.”

When it comes to price, Ioannou said that falling inventories in London and Shanghai point to a future spike in value, with supply dropping 2,000 to 3,000 tonnes a day.

“Every day the LME inventory continues to come down. Shanghai is also down year-to-date,” he said, adding that while stockpiles rose earlier in 2018, “as we’ve moved through the summer they’ve actually crept down every day and we’re getting pretty close to breaking that 200,000-tonne level.

“I think things get really interesting if you see LME approach 100,000 tonnes. At that point we’re talking about world supply — when you add in the other entities — being somewhere under a week of global demand, so things get ‘critical,’ and at that point I think you can see zinc prices spike quite quickly.”

As of Monday, LME zinc stockpiles stood at 215,975 tonnes, while Shanghai had 37,239 tonnes in its warehouses.

Lastly, Ioannou pointed to smelters and refiners as a key indicator of where the market is headed.

“One major thing we’ve seen happen this year which is very bullish with regards to the zinc thesis, is that we’ve seen the benchmark treatment charges drop significantly. They were $172 a tonne last year, down from north of $200 the year before, this year they came in at $147 a tonne,” he said.

“I think it’s a pretty good gauge that they see a supply issue coming and they’re positioning themselves … the last thing they want is their own refineries empty. So they’re willing to charge less to make sure they have guaranteed supply.”

Ioannou’s remarks are in sync with FocusEconomics, which in its September consensus report noted that while the zinc price was down on “exogenous factors” such as the trade war, which was baking fear into end-user sentiment, a dearth of supply would push the price back up in the near term.

“Fundamentals such as the deficit in the global market coupled with resilient demand for the commodity emanating from healthy manufacturing and construction activity should lend support to prices going forward,” states the report.

While FocusEconomics sees prices increasing, the report concludes that the metal will not end 2018 above US$3,000, and will instead average US$2,893 in Q4, according to analysts polled.

Are Canadians Still Interested in Global Cannabis Investments?
What Was the BP Stock Price Before the Deepwater Horizon Spill?
A Look at Historical Copper Prices
What Was the Highest Price for Silver?