Zinc’s positive outlook is largely a supply-side story. That said, investors should still be aware of the other side of the equation: demand.

Zinc’s positive outlook is largely a supply-side story. That said, it’s still worth investors’ while to be aware of the other side of the equation: demand.
While zinc demand has remained fairly steady over the last five years, with the metal mostly being used for galvanizing, some believe that interesting new uses may make headway in the coming years. What’s more, analysts are calling for global demand growth of around 2.4 percent over the next few years.
Here’s a brief overview of zinc applications, including recent zinc demand stats, plus a look at the metal’s current and up-and-coming applications.

Zinc demand has been fairly steady for the last five years, as explained above. Indeed, according to the International Lead and Zinc Study Group (ILZSG), it’s ranged from a low of 12,378,000 tonnes in 2012 to a high of 13,936,000 tonnes in 2016.
The chart below from the ILZSG illustrates that movement:

The organization also provides information on the industries that use zinc, noting that galvanizing is the biggest source of demand at 50 percent. It’s followed by zinc alloying and brass and bronze, both at 17 percent, and by zinc semi-manufacturers and chemicals, both at 6 percent.
Miscellaneous applications make up the remaining 4 percent of zinc demand. The chart below, also from the ILZSG, breaks down those statistics: 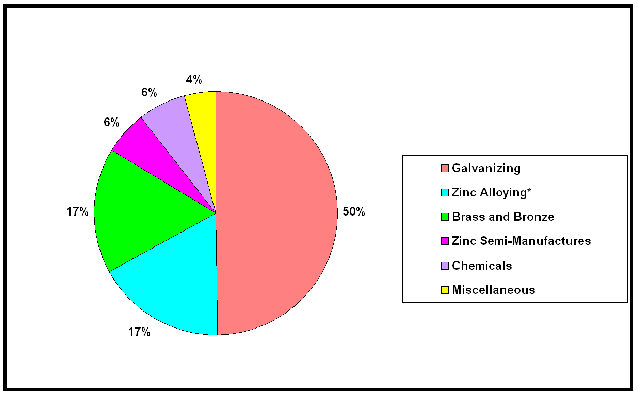 While zinc has many uses, it’s primarily used as an anti-corrosion agent. Galvanization, the process of applying a protective zinc coating to steel or iron, is the most common way zinc is used to stop corrosion. Because the metal is more reactive than both steel and iron, it’s able to save those metals from rusting.
Such coatings are generally applied electrochemically or through hot dipping or spraying.
Zinc can also prevent corrosion by serving as a “sacrificial anode” in a process known as cathodic protection. This method of protection can be used to protect buried pipelines — put simply, anodes made from zinc are attached to the pipeline, and then corrode away as they pass electric current to the pipeline. Cathodic protection is also used to protect metals exposed to seawater from corrosion.
On a different note, zinc is used heavily in alloys, particularly brass, where it’s combined with copper. Other alloys that contain zinc include bronze, nickel silver and soft and aluminum solder.
Outside of those industrial uses, zinc oxide and zinc sulfates are commonly used for a variety of commercial purposes, primarily by the chemical, paint and rubber industries. Zinc-related products range from medicines, dietary supplements, sunscreen, pains, vulcalnized rubber, phosphorescent applications and heat sinks in laptops and cell phones.

The above zinc applications are by far the most common, but in recent years, some market watchers have been touting what they believe is an up-and-coming end market for the metal: agriculture.
Most significantly, mining magnate Robert Friedland, currently executive chairman and founder of Ivanhoe Mines (TSX:IVN), has pointed to the metal’s potential in the agriculture sector, commenting that zinc “is now recognised, along with potash, as one of the most intense organic fertilisers.”
He sees China and India in particular as places that may start looking to use zinc as a fertilizer. “Some 60 per cent of soils in [those countries] have been depleted of zinc … [s]o China has mandated that fertiliser should include zinc,” he said. He believes that “has enormous implications for demand” — and by extension for zinc projects like his company’s Kipushi project in the Democratic Republic of Congo.
That all sounds promising, but for investors it’s the numbers that matter. So how much is the agricultural sector’s zinc demand really set to grow?
According to Stefan Schlag, director of specialty chemicals at IHS Chemical, the answer is “quite a lot.” In a report that he co-authored he states that while “[t]otal demand for zinc-derived chemicals is currently 1.5 million” MT, it’s set to rise above 1.8 million MT by 2018. Of that amount, “[a]bout 400 thousand [MT] … will be tied to agricultural demand, mostly in the form of zinc sulfate.”
On a different note, zinc’s potential applications in the battery sector have also been pointed out.

Zinc demand is on the rise and investors interested in the metal would do well to keep an eye on what’s going on.

Overall, it could be worth watching China, as industrial activity in that country is a big driver of zinc for galvanizing — a better Chinese economy leads to more building, and that generally leads to more zinc demand. Further out, the agriculture and battery sectors may be interesting to watch as well.
This is an updated version of an article originally published by the Investing News Network in 2015.
Securities Disclosure: I, Charlotte McLeod, hold no direct investment interest in any company mentioned in this article.