Pistol Bay Mining reports that it has optioned out 100% of it’s Ben Lake and Dixie 3 claims in the Red Lake Mining District to Infinite Lithium Corp.

Mike England, CEO of Infinite Lithium Corp. stated “While we are excited to have acquired these claims of merit from Pistol Bay, which are contiguous to our own recently acquired claims. It speak volumes to the quality of the sizable land positions still held by Pistol Bay in this prolific region of the Red Lake camp.”

The Pakwash East block comprises of 35 cells with an area of approximately 716 hectares (1,760 acres). It is 12.5 kilometres southeast of the Great Bear Resources Dixie property. It adjoins a 9,650-hectare claim group registered to Great Bear Resources.

The Pakwash North block comprises of 106-cells, 2,174hectare (5,370 acres). It lies 21 kilometres southeast of the Dixie Lake gold discovery now being explored by Great Bear Resources Ltd, and 44 kilometres southeast of the town of Red Lake. It is accessible by old forestry access roads leading from provincial highway 105, as well as by boat via Pakwash Lake and the Chukuni and English Rivers. Geological mapping has confirmed that Pakwash North straddles a major fault structure, The Sydney Lake Fault.

The Pakwash South property comprises of 2,130-hectare (5,264 acres) lies southeast of the Dixie Lake gold discovery now being explored by Great Bear Resources Ltd. It is accessible by old forestry access roads leading from provincial highway 105, as well as by boat via Pakwash Lake and the Chukuni and English Rivers. 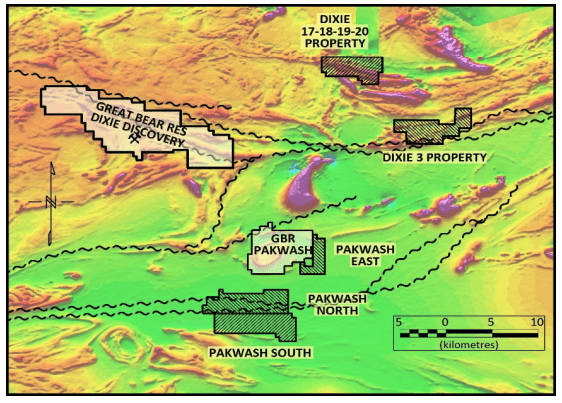 The Confederation Lake properties consist of 1096 claims over 20,700 hectares or 51,050 acres covering 60 km in length. A total of 567 holes were drilled on the properties. This includes all of the mining claims Pistol Bay acquired from AurCrest totaling 321 claim units with an area of 5,136 ha over 31 km This area includes two substantial mineral deposits and a number of mineralized drill intersections that are in need of follow-up drill testing. 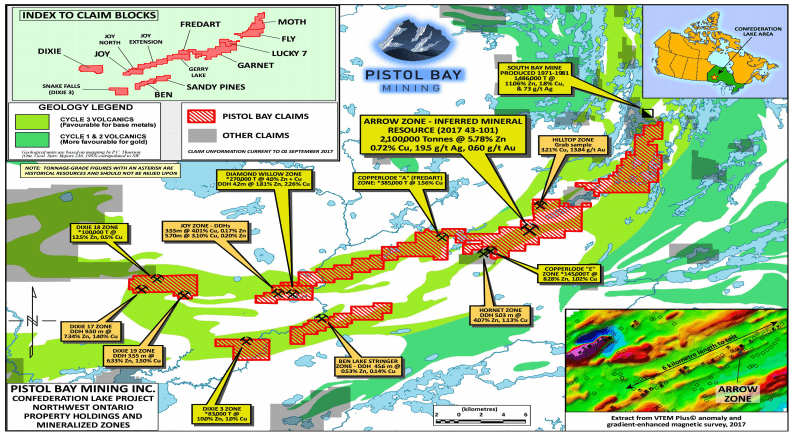 The Arrow Zone has a 43-101 compatible mineral resources as follows:

Another substantial deposit in Pistol’s portfolio is the Copperlode “A” or Fredart Zone. It has a historical mineral resource of 386,000 tonnes grading 1.56% copper (non-compliant NI 43-101 and has not been reviewed by a Qualified Person). The zone was previously drill-tested to a depth of approximately 200 meters over a length of 350 meters, and was reported as being open at depth. A total of 283 drill holes were drilled on the Fredart ‘A’ and Garnet Lake claims. The area was also explored for molybdenum in the 1970’s and samples containing up to 1.46% Mo were reported.

In 2017 a VTEM Plus survey was done on most of the claims and it showed conductors on these claims that do not appear to have been drilled-tested in the past are 400, 850, 900 and 950 metres and there is an almost continuous trend of conductivity over a length of 6.5 kilometre

The Joy North claim is contiguous with the Joy group of claims and covers five separate mineralized zones, all of VMS character. A single 48 metre diamond drill hole was put down in the vicinity of the conductor (exact location unknown) in 1970 by Caravelle Mines Ltd. It intersected a variety of metavolcanic rocks exhibiting intense alteration of the type associated with Volcanogenic Massive Sulphide (VMS) deposits. It also intersected calc-silicate rocks suggesting that the Property may lie at the same stratigraphic horizon as the Dixie zone, 11 kilometres to the west.

The Mitchell Township or Fly-Moth claim group covers a 9 kilometre stretch of the Confederation Lake greenstone belt and extends to within 1.5 km of the former producing South Bay zinc-coppersilver mine. Previous exploration has included approximately 90 diamond drill holes.

The Wasp Lake Mineralized Trend was extensively drilled by Selco; This mineralized trend gave a strong conductive response on Pistol Bay’s recent VTEM PLUS airborne survey. The Company plans to have the geophysics modelled to assess the possibility of a deep-seated massive sulphide zone.

The Fly Lake zone was tested by 4 drill holes by St Joseph Minerals in 1976 over a 50 metre length. Pistol Bay’s VTEM PLUS survey gave a well-defined response on 2 lines, indicating a length of up to 400 metres. This zone appears to be open along strike and at depth. The Company proposes to drill for extensions of the mineralization, assisted by modelling of the VTEM data. VTEM Anomalies:

There are 9 discrete VTEM PLUS conductive anomalies that do not appear to have had any previous drill testing. Their conductivity varies from very weak to moderate. Most are in areas with little or no outcrop and one is under a lake.

The Lucky 7 Property (5 claims, 640 hectares, 1580 acres) covers a number of mineralized zones. The claims adjoin the Garnet Lake and Garnet East claim groups. A copper-gold sulphide zone, which apparently grades into a siliceous gold zone at its eastern end, was stripped and drill tested in 2002 by Kings Bay Gold Corp. Two short electromagnetic anomalies were drill tested by Selco Mining Corp. in 1980. A zone of massive to disseminated sulphides, referred to as the Hilltop Copper-Gold Zone, has been trenched but apparently never drilled.

The Moth group of 10 claims comprises 85 units (1360 hectares, 3360 acres). It is separated from the Lucky 7 claims by a 5 kilometre gap. It covers a 5.5 kilometre length of favourable geology and its north boundary is only 2 kilometres from the former producing South Bay mine, which is at the end of the South Bay Road, and hence the end of the most accessible part of the Confederation Lake greenstone belt. The area was extensively explored between 1970 and the mid 1990s, with at least 14 diamond drill holes. Widespread hydrothermal alteration was noted and there were numerous indications of zinc and/or copper mineralization.

Pistol Bay Mining Inc. is a diversified Junior Canadian Mineral Exploration Company with a focus on zinc and base metal properties in North America. The company is also actively pursuing the right opportunity in other resources to enhance shareholders value. For additional information please visit the Company website at www.pistolbaymininginc.com or contact Charles Desjardins at pistolbaymining@gmail.com.

Click here to connect with Pistol Bay Mining (TSXV:PST) for an Investor Presentation.