Nicola Mining Inc. (TSXV:NIM) (the “Company”) is pleased to announce that it has received positive assay results from ALS Metallurgy Laboratory (“ALS Lab”). The Company announced on March 29, 2019 that testing conducted at Tomra Sorting’s Test Center in Hamburg, Germany appeared to successfully separate copper ore[1] from waste rock based on sulphide and gravity parameters. The ALS Lab results confirm the ability to ore sort with the TOMRA Tertiary XRT Sorter Conveyor (“XRT Sorter”). The results also highlight the potential of monetising copper contained within the historical mine terraces at the Company’s wholly owned New Craigmont Copper Project (“Craigmont Project”). A portion of the approximate 80-90 million-tonnes[2], surrounding the Craigmont Mine pit contains copper and magnetite.

The XRT Sorter utilises x-ray transmission sensors to identify differences in atomic density between copper-containing mineralised material and waste material. All 29 samples were separated into 8 unique tests and shipped from Germany to the ALS Labs to confirm assay percentages, upgrading capabilities and copper recovery.

In addition to testing two specific locations, the material samples were screened into <2″>1″, <1″> ½” and < ½” fractions. Any >2″ material was coarse crushed and then screened. The <2″>1″ and <1″> ½” fractions were sent to Tomra, where they were tested using high and low selectivity settings for the x-ray transmission sensors. All sorted material was subsequently shipped to ALS Metallurgy for crushing and chemical analyses. Sorted material was separated by the two locations and classified into three sizes prior to analysis:

Two very important findings in the ALS Lab results include the following: 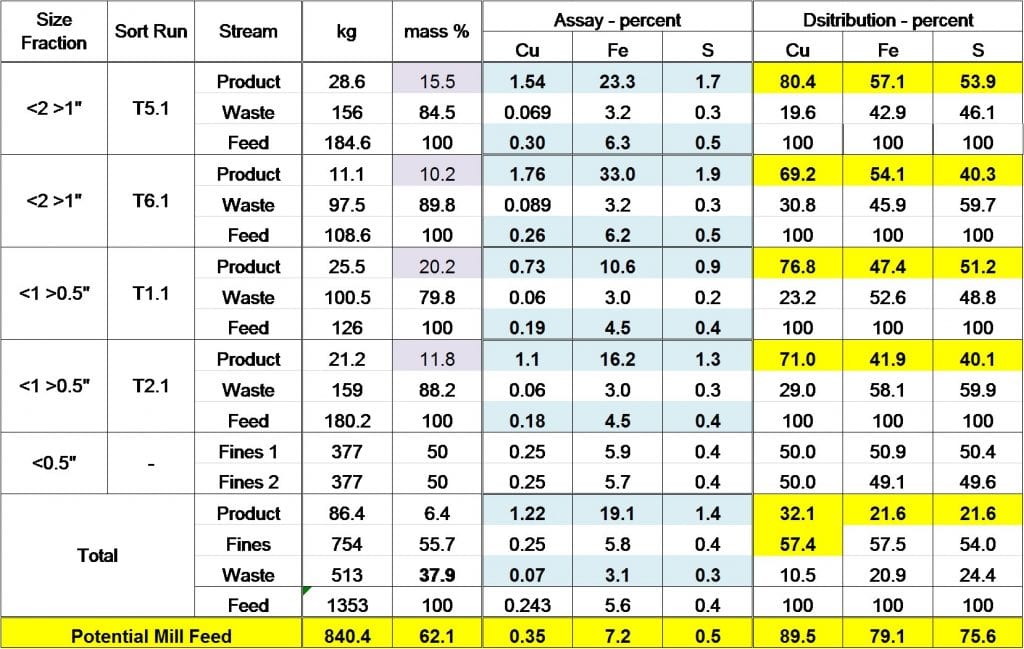 The Portal Sample Results were also encouraging; however, it should be noted that, although the tested material samples weights are identical, the actual tonnage represented by the Tower Sample is far greater. Upgrading proved very successful but the recovery levels of the upgraded product were lower than those of Tower Samples. From the 1373-kilogram Portal Sample, 86.7 kg was classified as upgraded product, 540 kg as Fines and 748 kg as waste, Figure 3. 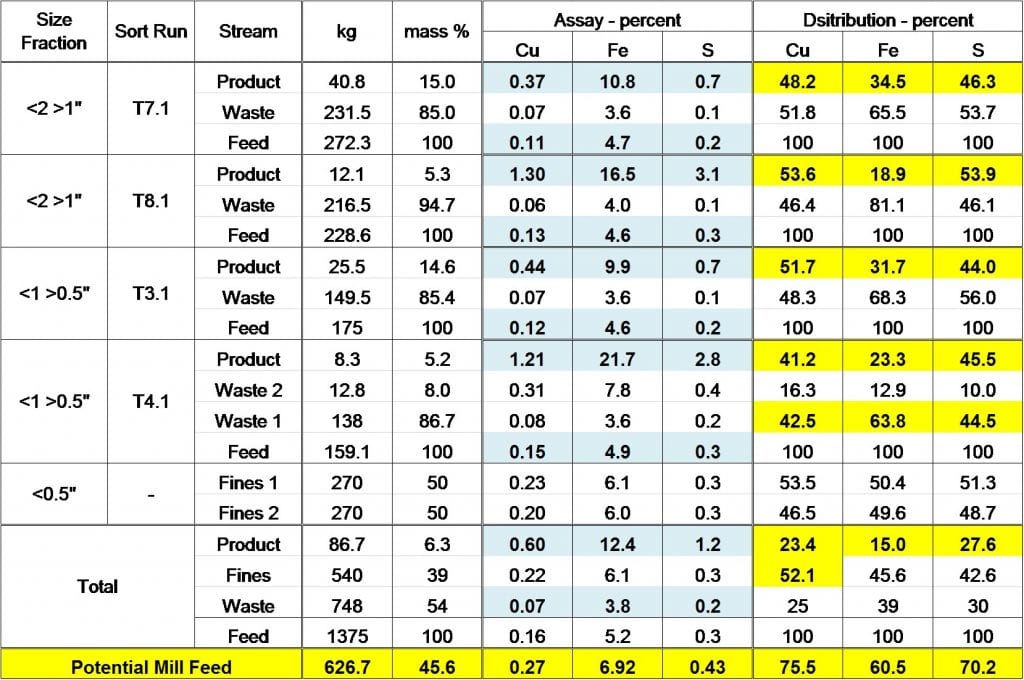 Peter Espig, Chief Executive Officer, commented, “the positive assay results received from ALS Metallurgy Laboratory on the Tertiary XRT sorter conveyor material is very encouraging. Given the historic material’s approximate 80-90 million tonnes and no direct mining costs associated with the extraction, the ability to upgrade material could add significant value to our project. We are currently testing the material for copper and magnetite recovery and will issue the results once received.”

Nicola Mining Inc. is a junior mining company listed on the TSX Venture Exchange and is in the process of recommencing mill feed processing operations at its 100% owned state-of-the-art mill and tailings facility, located near Merritt, British Columbia. It has already signed six mill profit share agreements with high-grade gold producers. The fully-permitted mill can process both gold and silver mill feed via gravity and flotation processes. The Company has an active gravel pit that is located adjacent to the milling operation, as well as 100% ownership of the high-grade silver Treasure Mountain property.

In November 2015, Nicola became the first group in decades to consolidate ownership of the New Craigmont Project (the “Property”) and has been actively conducting mineral exploration since. The Property is a wholly-owned copper-iron property with an active mine permit (M-68), located 33 km south of the world-class Highland Valley porphyry district. It lies at the southern contact between the Nicola Group and Guichon Creek batholith, of which the latter is known to be a precursor intrusive event to mineralisation at the Highland Valley.

There are currently no NI 43-101 compliant mineral resource estimates on the Property; however, an estimated 60,000,000 tons of ore grading at >0.4% copper is reported to have remained unmined in the mineralised hanging wall of the Sub level cave, due to a 0.7% copper cut-off grade[3]. Additionally, five zones of finely mineralised silicified ore (No. 3 type mineralisation) are known, one of which is reported to contain an estimated 269,260 tons grading at 1.68% copper.

TOMRA Sorting Mining is part of TOMRA Sorting Solutions, which also develops sensor-based systems for sorting, peeling and process analytics for the food, as well as the recycling and waste management industry.

TOMRA Sorting Mining is owned by the Norwegian company TOMRA Systems ASA, which is listed on the Oslo Stock Exchange. Founded in 1972, TOMRA Systems ASA has a turnover of around €750m and employs over 3,500 people.

[1] In this news release, the word “ore” is used describe a rock that is the characteristic of copper mine grades; however, it cannot be assumed that it will be of a profitable grade at the Craigmont site.
[2] Reference: 3D Surveys report dated June 27, 2016
[3] Bristow, J.F. (Jul. 22, 1985) Internal memo: Continued Exploration at Craigmont Mines Limited’s Merritt Property.