Mercenary Geologist Mickey Fulp believes copper’s supply and demand fundamentals make it a compelling investment. Plus — learn his pick in the junior space.

The International Metal Writers Conference featured many companies and experts, and one talk the Investing News Network was able to attend was from Mercenary Geologist Mickey Fulp.
Fulp, a self-described contrarian, started his 30-minute copper-focused presentation by reviewing the market over the last decade.
As the chart below shows, the copper price peaked after the 2009 crisis, when China turned to infrastructure development to get out of its economic bubble. It continued at that level until 2013, and then began to fall until commodities bottomed in January 2016. Copper later rallied in the second part of 2016, when recently elected US President Donald Trump pledged to spend $1 trillion on infrastructure. 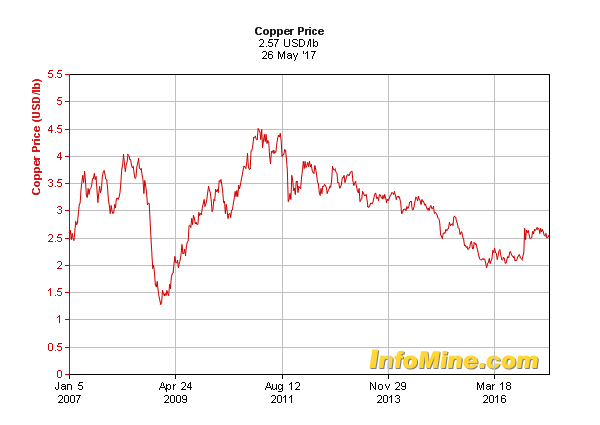 Chart via InfoMine.
Fulp went on to explain the supply and demand fundamentals for copper, mentioning that the market has been imbalanced since 2007 by a small deficit caused by supply disruptions. Overall, he said, demand for copper has been growing by 3.4 percent every year since the world became electrified in 1990.
“We were using 4 million tonnes of copper per year in 1960 — now we are using 23 million tonnes of copper per year, and this continues to grow,” he said.
According to Fulp, copper demand will only continue to rise. That’s because the world’s population continues to increase, as does copper consumption per person. “Not only is the world’s population rising on the planet, but also copper consumption [has been] increasing annually since 1990, based on demand from people who don’t have electricity,” he said.
Fulp emphasized that copper demand will surge in emerging markets like China, India, Brazil and Indonesia, as well as in the US. 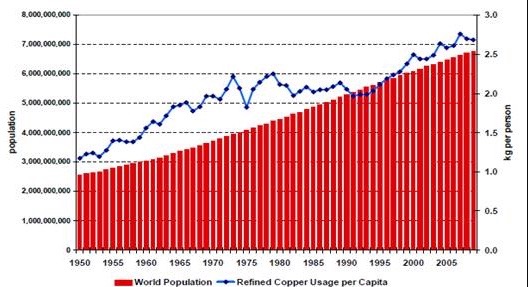 Source: International Copper Study Group
As copper demand grows, the supply shortfall will continue to become larger. “There is no easy solution for the copper supply problem,” said Fulp, adding that is difficult to think where the red metal will come from. Africa has great sources of copper, but is home to many politically unstable countries, such as the Democratic Republic of Congo, as well as countries with power issues, such as Zambia.
The key, said Fulp, is to become smarter in exploration, as “technology and innovation will help to solve the copper supply issue.”
“I am a copper bull because there are 85 million new people on the planet every year and average copper consumption is approximately 3 kilograms each,” he said. His pick in the copper space is Trilogy Metals (TSX:TMQ), which owns the Upper Kobuk project in Alaska’s Ambler Mining District.
Don’t forget to follow us @INN_Resource for real-time news updates!
Securities Disclosure: I, Priscila Barrera, hold no direct investment interest in any company mentioned in this article.