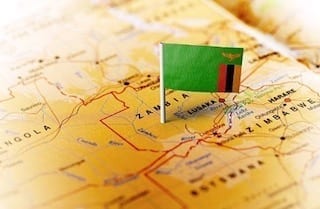 Mining giant Glencore (LSE:GLEN) has suspended its copper operations in Zambia due to reduced power supply in the country, the company said on Monday (August 14).
Last Saturday (August 12), Zambian energy supplier Copperbelt Energy Corporation restricted power distribution to Glencore copper unit Mopani Copper Mines because of an ongoing dispute over tariffs.
As a result, Mopani stopped all production at its mines in the country. The company owns the Mufulira underground shaft in Mufulira, as well as the Nkana underground shaft, the South ore body shaft and the Mindola shaft in Kitwe.


Give me my free report!
“In the interest of safety, Mopani has with immediate effect suspended operations in certain areas, and all our miners who were underground at the time of restricting power supply, have successfully returned to the surface,” the copper producer said in a statement.
For the past three years, Zambia’s copper output has been disrupted by a dispute over power prices. Mine operators, which consume more than half the country’s electricity, have been locked in battle with the government over a price increase.
In April, the government proposed the introduction of a flat tariff of 9.3 cents per kilowatt hour (kWh), backdated to January for mining companies, instead of individually negotiated rates that have averaged 6 cents per kWh.
But mining companies opposed the plan, despite Zambia’s finance minister, Felix Mutati, saying in May that the government was close to reaching an agreement for higher prices.
Zambia, Africa’s second-largest copper producer, is also struggling to maintain power supply as a severe drought has caused levels to drop in the Kariba dam, which generates much of the nation’s electricity.
Other major mining companies operating in Zambia include Vedanta Resources (LSE:VED), First Quantum Minerals (TSX:FM,LSE:FQM) and Barrick Gold (TSX:ABX,NYSE:ABX).
On Monday, LME copper ended 0.2 percent down, at $6,397 a tonne, after touching a more than two-year high last Wednesday (August 9) at $6,515.

Don’t forget to follow us at @INN_Resource for real-time news updates!
Securities Disclosure: I, Priscila Barrera, hold no direct investment interest in any company mentioned in this article.