U.S. copper futures closed with strong gains on Monday after a $1 trillion emergency package in Europe helped restore confidence in the global recovery. Unfortunately, the relief was short lived, as the markets suffered losses upon opening on Tuesday. 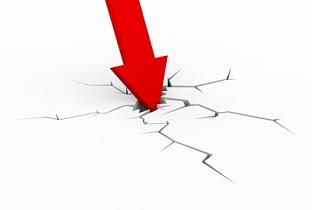 U.S. copper futures closed with strong gains on Monday after a $1 trillion emergency package in Europe helped restore confidence in the global recovery. Unfortunately, the relief was short lived, as the markets suffered losses upon opening on Tuesday.

On Tuesday, copper futures retreated from their gains, as fears that the European bailout would only provide a band-aid fix permeated the global markets. The euro lost all of Monday’s gains, Copper for delivery in three months slid $184, or 2.6 percent, to $6,936 a metric ton at 11:22 a.m. on the London Metal Exchange. That wiped out yesterday’s 2.5 percent gain, the biggest in six weeks. Copper futures for July delivery fell 2.7 percent to $3.14 a pound on the COMEX in New York. All of the six main metals traded on the LME retreated, with nickel suffering the biggest loss.

Adding to the metal’s downside were resurrecting concerns of falling demand in China. Despite previous attempts to curb inflation, China faces more pressure to slow economic growth after inflation accelerated at the fastest pace in 18 months. Consumer prices rose 2.8 percent in April from a year earlier, according to the statistics bureau. “Chinese inflation figures are through the roof,” said Steve Hardcastle, an analyst at Sucden Financial Ltd. in London.

Inventories of copper tracked by the LME fell for an 11th straight day, declining 0.4 percent to 487,450 tonnes, the lowest level since Dec. 29. Bookings to remove metal from warehouses slid for a 10th day, declining 9.3 percent to 15,550 tonnes.

Strikes may hit several of Chile’s mines this year with many labor contracts up for renewal.  Recently, subcontractors at the Collahuasi mine went on strike. Owners expect a quick end to the four-day protest that has halted operations at one of the world’s largest deposits and prompted global supply fears.  Operation at the mine, which produced 3.3 percent of the world’s mined copper, were halted on Saturday after hundreds of subcontractors blocked roads with burning tires and rocks to demand better working conditions. Collahuasi’s full-time workers union publicly backs the protest, which could mean tough wage negotiations this year as the union contract expires in November. It is historically proven than when workers in Chile strike, copper prices start to climb.

On May 2, Australia announced its plan to impose a 40 percent mining tax.  As a result, miners in the region have announced that they will suspend exploration. Most recently, Xstrata Plc, (LSE: XTA) the world’s fourth- largest copper producer, said today its North Queensland unit suspended its regional exploration program. “We have decided to suspend exploration activities in North Queensland until there is greater certainty on the fiscal regime for future mining developments,” Steve de Kruijff, chief operating officer of Zug, Xstrata’s Australian copper unit, said today in an e-mailed statement. BHP Billiton Ltd. (NYSE:BHP) and Rio Tinto Group (NYSE:RTP) have previously announced that they will review projects while they study the effects of the tax. The tax “would also change the relative economics of these prospects compared with exploration programs that Xstrata Copper is pursuing in other parts of the world,” de Kruijff said. The proposal is likely to “dry up” mergers and acquisitions, according to Citigroup Inc. Xstrata also mines lead and silver in Australia, South Africa, Germany, Argentina and the U.K.

Canadian copper miner First Quantum Minerals (TSX: FM) announced on Monday that its first-quarter profit soared on higher copper prices. The Canadian copper and gold miner, which has assets in Africa, earned $181-million, or $1.70 a share, in the quarter ending March 31. That compared with a profit of $21.5-million, or 16 cents a share, in the year-before period. Analysts had expected, on average, a profit of $2.53 a share, excluding exceptional items. Revenue more than doubled to $562.8 million.  The company produced 85,062 tonnes of copper and realized copper prices of $2.89 per pound, up from $1.51 a year ago. The company said estimated production for 2010 is 385 000 tonnes of copper and 220 000 ounces of gold.