Here’s an overview of the main factors that impacted the copper market in Q2 2019, and what’s ahead for the rest of the year.

2019’s second quarter brought a strong performance from copper for the first month, but saw the red metal’s price point take a downward trajectory from May onwards.

Between supply concerns and a consistently turbulent relationship between China and the United States, investor skittishness surrounding copper laid out a tough quarter for the base metal.

Similar to Q1, copper prices continued to react to the turbulent relationship between the United States and China this past quarter. While the red metal held a firm grip on the US$6,350 to US$6,500 per tonne range in April, the commodity took a near US$200 drop in one day at the start of May. 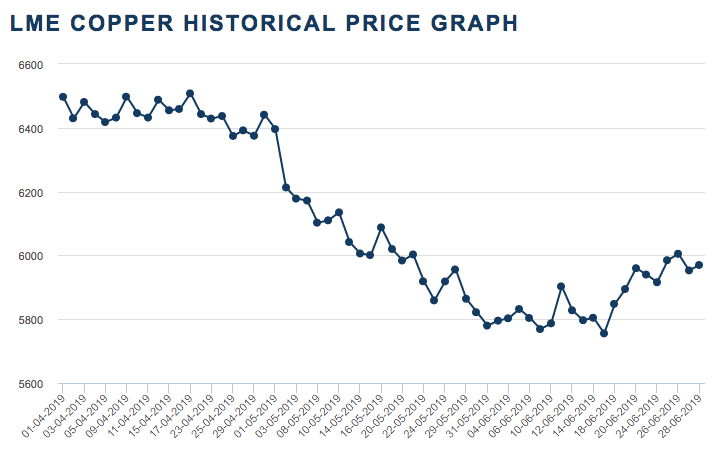 This began a downtrend for copper, which was weighed further down by trade tensions reignited by tariffs. In May, US President Donald Trump doubled tariff rates on US$200 billion worth of Chinese imports, further straining the relationship between the two nations.

Speaking to INN, Wood Mackenzie Copper Demand Analyst Henry Salisbury highlighted the tariffs as one of copper’s biggest curveballs over the last quarter.

“The introduction of further US tariffs on US$200 (billion) worth of Chinese goods added further pressure on an already slowing global macroeconomic outlook for this year. Further tweets from President Trump threatening tariffs on all Mexican imports (which were later removed) led to reactions in the market that could not be anticipated,” Salisbury said. “Prices and equities began to tumble.”

And tumble they did — as the quarter moved into June, the copper price kissed the US$6,000 mark goodbye as it hovered closer to US$5,800 on the London Metal Exchange. While the base metal managed to recover some of its losses, it was still bruised as it ended Q2 at US$5,970 on June 28.

Q1 was riddled with concerns about a potential copper supply shortage, and Q2 saw some of that fear come to life in the form of various disruptions throughout the copper space. According to Salisbury, Wood Mackenzie has recorded more mine disruptions so far this year than in 2018 as a whole; however, it’s worth noting that not every incident was manmade.

In a note to INN, Capital Economics Senior Commodities Economist Ross Strachan laid out the vast problems that have impacted the copper market over the last few months.

“Last year there was a low level of disruption, but 2019 has seen a slew of problems, including the strike at (Codelco’s) Chuquicamata, floods in Chile, environmental curtailments at Chilean smelters, as well as unplanned cuts in Africa and Europe,” he wrote.

“What’s more, the transition from open-pit to underground mining at Grasberg, one of the world’s largest copper mines, is leading to a 40 percent drop in output this year,” Strachan added. “Overall, we now expect copper mine production to grow by a mere 0.5 percent this year.”

While Strachan noted that output lost from Grasberg is expected to bounce back next year, the deficit still stands tall as a significant concern. Last quarter, CRU Group Principal Analyst Robert Edwards told INN that, as things currently stand, a copper supply shortage is on its way; the only questions at this point are when it will happen, and to what extent.

Echoing that sentiment was Colin Hamilton, BMO Capital Markets’ managing director of commodities research, who explained that, while copper’s fundamentals were better over the last quarter, sentiment and supply didn’t fare as well.

“It’s interesting to see the financial market position become quite negative over the course of the second quarter. I would say the fundamentals, if anything, are improving. I’ve actually seen a decent inventory draw in the copper market over … the latter part of Q2, and the supply side in the copper industry, which is still struggling,” Hamilton said.

As analysts and economists alike mull over what appears to be a dwindling pipeline of new copper projects and expansions, pricing for the base metal is expected to remain strong as demand continues.

As with any commodity, the game of supply and demand is a balancing act; when one goes up, the other can go down. Given copper’s precarious supply position, in combination with its usage in the growing electric vehicle market, demand for the base metal stands to pick up traction in the long term.

Similar to copper’s pricing, demand can fluctuate with factors like geopolitical issues, or more specifically, the up-and-down relationship between China and the United States.

“The US and China are set to resume trade talks over the coming weeks. The development of these discussions will influence sentiment in the market and could also support or apply downward pressure on copper demand this year,” Salisbury said.

Also chiming in on China’s role in copper demand was FocusEconomics economist Nicolas J. Aguilar, who noted that the commodity lost major strength in both pricing and demand during Q2 due to May’s heightened United States-China squabbling.

“Looking ahead, analysts project copper prices to rise. Trade tensions between the world’s two superpowers are expected to recede. Moreover, supply side constraints have been bubbling in the background, mainly in Peru, Chile and Zambia, while demand is largely expected to climb owing to the usability of the red metal in new technologies.”

FocusEconomics’ latest commodity forecast touts disappointing manufacturing data from China as a concerning factor in terms of weakened red metal demand in June. However, the same report offers optimism similar to that of other analysts on the basis of easing trade tensions and tightened supply.

While the next quarter may not see any major shifts in terms of demand, Hamilton explained that market watchers will want to keep their eye on China all the same.

“Q3 is known as a seasonally weaker quarter from a demand perspective. What is perhaps going to be one of the more interesting things to watch over the third quarter, there have been some Chinese import restrictions on copper scrap, so everyone’s kind of waiting to see the impact of those.”

Elaborating further on the matter of Chinese import restrictions on copper scrap was Salisbury, who agreed that it will be a significant factor investors should watch for in Q3.

“The reclassification of Category 6 copper scrap as a ‘restricted import good’ has led to a quota system with delivery of Q3 quotas to traders and scrap consumers mostly located in Zhejiang province in China on June 20. More quotas are set to be delivered and scrap importers are of the opinion that the final import quota for 2019 will be similar to their actual imports of Category 6 during H2 2018.”

With China being the world’s largest copper consumer, the new restrictions could put a notable dent in the market. According to Reuters, China has been working to limit scrap imports in an effort to reduce the shipment of foreign solid waste into the country; however, the outlet notes that scrap accounted for 10 percent of China’s copper use last year.

Strachan also touched on the restrictions in a note to INN, explaining that the aforementioned Category 6 material has a “much higher copper content than other scrap” and could, in turn, lead to higher demand for refined copper.

In terms of pricing, most analysts and economists agree that copper’s numbers are set to rise over the next two quarters. While some predict a year-end copper price of approximately US$6,000, others are more bullish, with a forecasted Q4 average of US$6,500.

A poll by FocusEconomics released this month saw United Overseas Bank take the most bearish stance on Q3 copper prices at US$5,800, while OCE Australian Government was the most bullish at US$6,680.