What’s the copper outlook for 2018? Analysts are cautiously optimistic about the red metal in 2018. Read on to learn what they had to say.

Market participants were expecting copper to have a bright 2017, and for 2018 most forecasts for the base metal remain bullish.
Copper prices climbed in the second half of the year, breaking the $7,000-per-tonne-level, and they have traded in that range since then. A strong Chinese demand forecast, supply worries and speculation supported prices this year. On Tuesday (December 12), the red metal was changing hands at $6,663.
But as the year comes to an end, what can investors expect in 2018? Read on to learn more about the copper outlook for 2018, from supply and demand information to prices.

At the end of 2016, market participants were overall positive about copper, expecting prices to continue to increase during the year. As mentioned, copper didn’t disappoint, with prices starting to climb during the second half of the year; overall they are up more than 18 percent year-to-date.
As the chart from Kitco below shows, the highest point of the year came in October, when prices broke $7,000. A strong Chinese demand forecast, supply worries and speculation supported the rally. 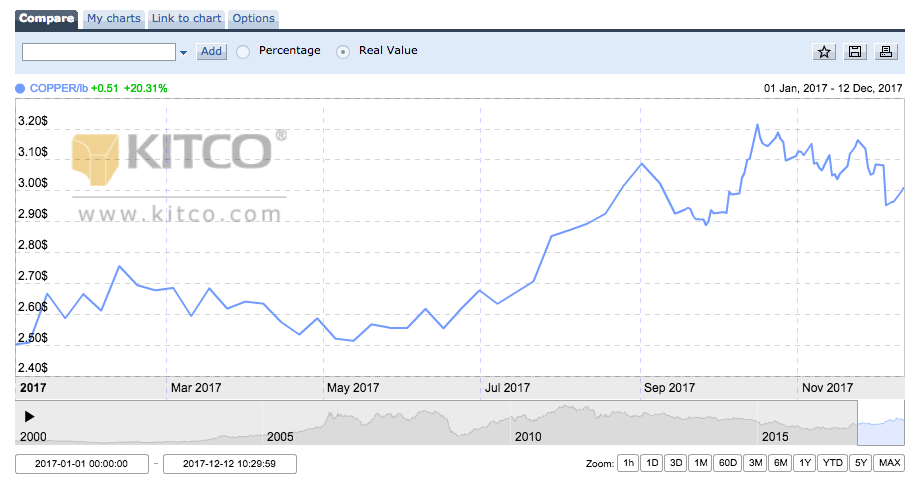 Chart via Kitco.
Meanwhile, copper’s lowest point of the year came in May, when prices were trading at $5,465.50 due to a rise in stockpiles, a stronger US dollar and risk aversion caused by geopolitical tensions.
At this time last year, Thomson Reuters GFMS base metals analyst Karen Norton believed copper prices had bottomed out in 2016, and that prices would rise only at a low double-digit rate in 2017. “Increasingly, however, speculative involvement has tended to exaggerate moves such that copper has outperformed from a fundamental perspective,” she said.
Similarly, Dan Smith, head of commodities research at Oxford Economics, said base metals prices generally surprised to the upside this year.
One of the key copper trends in 2017 has been supply disruptions. The strike at BHP Billiton’s (ASX:BHP,NYSE:BHP,LSE:BLT) Escondida, the largest copper mine in the world, and the suspension of concentrate exports from Freeport-McMoRan’s (NYSE:FCX) Grasberg, the world’s second-largest copper mine, kept the markets nervous.
“A higher-than-usual level of supply disruptions, coupled with slightly better-than-expected Chinese demand due to the property sector slowdown have resulted in a tighter market than we expected,” Norton said. She still expects a surplus for the year, albeit a relatively modest one.

Another factor supporting prices was the news that China would limit copper scraps imports. “In our view, however, it was an excuse rather than a reason for the rally” in the second half of the year, Norton added.
For Smith, China’s strong economic activity, a weaker US dollar and supply constraints supported by Escondida’s strike and Grasberg’s permit issues were the main price drivers. “[But] the biggest single news in the industry this year has been the idea that the electric vehicle market in China will take off soon and that it will as a result potentially increase demand in copper as well as other metals,” he said.

Although speculation was one of the factors driving prices higher this year, paying attention to copper fundamentals is key to understanding how the base metal will perform in 2018.
In terms of supply, Norton is expecting a sharp pick up in production next year that will smooth out this year’s bumpy ride. “Driving this in terms of mine production will be the restart of Glencore’s (LSE:GLEN) idled capacity in Africa after a more sedate 2017,” she said.
Norton added, “Peru will grow more strongly again in 2018, helped by the expansion at Southern Copper’s (NYSE:SCCO) Toquepala, while First Quantum Minerals (TSX:FM,NYSE:FQM) will bring its Cobre de Panama mine onstream.”
That said, China will play a key role in refined production as smelter capacity growth picks up pace. “Glencore’s idled capacity in the Democratic Republic of Congo that is due to restart encompasses an SX-EW operation producing cathode, and so will also contribute to the bottom line,” Norton explained.
Looking over to demand, Norton expects consumption in China to continue to increase next year, but at a slower rate than in 2017. Similarly, Smith expects an uptick in Chinese demand, although it will still be lower than what has been seen in the past five to 10 years.
US demand has been largely disappointing this year, according to Norton, but prospects may be slightly brighter next year if copper benefits from any trickle down from higher infrastructure spending.
Elsewhere, Norton expects India and Brazil to be bright spots next year. “Growth rates are expected to pick up helped by the ‘Make in India’ campaign and plans for new smart cities,” she said, adding that several companies in India have plans to boost their downstream copper capacity in the coming years.
Smith also expects demand in emerging markets to do well, but he forecasts that demand from Europe will be strong next year as well, as several sectors have picked up.
In terms of stockpiles, Norton sees stocks increasing as production picks up next year. With that in mind, she doesn’t expect a deficit until 2020 to 2021, when the lack of new mine supply starts to bite.
“However, we do see dwindling surpluses in the run up to that, which are sufficiently modest to propel prices higher from the latter part of next year onwards,” she added. In fact, GFMS is expecting a larger surplus next year on the order of 300,000 tonnes.
Meanwhile, Smith anticipates a drawdown in stockpiles next year. “That is mainly because we are generally optimistic about the macro story, with strong demand from China and globally,” he said, adding that he expects the copper market to be in deficit next year and for that to continue for awhile.

As the new year starts, investors should keep an eye on several catalysts that could impact copper.
Norton mentioned Glencore’s restart plans and other possible restarts if prices stay high as key to watch out for in the new year. Supply disruptions due to weather conditions and labor negotiations in top copper-producing countries Chile and Peru will also be crucial to pay attention to.
“[It is also] worth keeping a watch on developments at Grasberg with regard to ownership and the concentrate export permit,” she said, adding that China’s scrap import issue could also end up having a more far-reaching impact than expected next year.
Looking over to demand, Norton suggested keeping an eye out for China’s real estate sector and global economic growth.

In terms of prices, she expects copper to pull back from the current elevated levels. She sees the decrease coming as it becomes clear that tight supply will not be an issue at a time when the slowdown in China’s real estate sector is kicking in on the demand side.

“We assume prices will start to pick up again in the latter part of 2018 and into 2019, but that may come sooner if concerns over the looming supply deficit override ‘shorter-term’ fundamentals,” she added.
Despite expecting a deficit in the market next year, Smith said that doesn’t necessarily mean prices will go up. In fact, they could actually pull back from the high levels seen right now. He noted that the optimism that supported the rally in copper this year was a bit “overdone.”
Oxford Economics is calling for copper prices to average $5,997 next year, and expects them to trade higher in the first half of the year and pull back at the end of 2018.
Meanwhile, firms polled by FocusEconomics estimate that the average copper price for 2018 will be $6,289. The most bullish forecast for the year comes from Pezco, which is calling for a price of $6,289; meanwhile, Liberum Capital is the most bearish with a forecast of $4,960.
Don’t forget to follow us @INN_Resource for real-time news updates!
Securities Disclosure: I, Priscila Barrera, hold no direct investment interest in any company mentioned in this article.
Editorial Disclosure: The Investing News Network does not guarantee the accuracy or thoroughness of the information reported in the interviews it conducts. The opinions expressed in these interviews do not reflect the opinions of the Investing News Network and do not constitute investment advice. All readers are encouraged to perform their own due diligence.