INN takes a look at some of the major stories and developments in the pharma industry during 2017.

The pharmaceutical market allows investors to have a stake in the work of curing patients either with large market players expanding their reach into new sectors or with smaller companies pushing new innovation on unmet needs.
Throughout 2017 the pharma industry faced against the criticisms of the US president Donald Trump, the rising costs of this industry and the regulatory limbo of a new tax and health care plan in the US. On an international level, the rise of emerging markets and patient care has allowed for more licensing deals to expand the reach of modern drugs.
With the year coming to a close, here the Investing News Network (INN) takes a look back at some of the major developments in the pharmaceutical industry throughout 2017.

In 2017 the US Food and Drug Administration (FDA) approved 43 new novel drugs. These candidates were top of the class in innovation and their successful trials catapulted them into approval products.
Aerie Pharmaceuticals (NASDAQ:AERI) received the most recent approval for its Rhopressa product, which treats glaucoma or ocular hypertension.
Novo Nordisk (NYSE:NVO) also earned an approval for their candidate Xepi used to reduce the bleeding episodes for adult and pediatric patients with hemophilia A, which the National Hemophilia Foundation describes as a “genetic disorder caused by missing or defective factor VIII, a clotting protein.”
Rounding up the most recent approvals for public pharmaceuticals is Ultragenyx Pharmaceutical (NASDAQ:RARE), which obtained an FDA approval on its Mepsevii candidate treating Sly syndrome, a rare disease in both adult and children.

Amongst the many Twitter (NYSE:TWTR) fights that US president Donald Trump has picked up, conflict with the pharma industry was one to remember in 2017. Before taking office, Trump had already said he would work to bring down the costs of pharmaceutical products.
The industry had mixed reactions at the same time. Many companies and markets were excited for Trump’s arrival at the White House  –due to potential tax breaks and changes in regulation favorable to companies– the unpredictable nature of Trump wasn’t a positive sign for many stocks.
In March, Trump tweeted again about his mission to create more competition in the pharma industry. After his tweets, it was reported shares of some major companies like Pfizer (NYSE:PFE), Merck (NYSE:MRK) and Amgen (NASDAQ:AMGN) all dropped at least one percent.
“I am working on a new system where there will be competition in the Drug Industry. Pricing for the American people will come way down!” Trump’s tweet read back in March.
Experts have recently pointed to a lesser impact from Trump’s constant barrage of tweets against his opponents.
“Three years of pharma-bashing have yielded almost no US action on drug pricing and even President Trump, the occasional tweet or applause line notwithstanding, appears to have lost interest,” a market report from EP Vantage said.
“His appointment of a former Lilly [(NYSE:LLY]) executive, Alex Azar, as Health and Human Services secretary is surely another positive sign for the sector.” 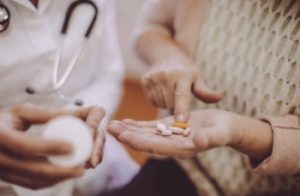 A report on rising trends in the pharmaceutical industry signaled to the need for companies in this space to recognize the demand for an upgrade when dealing with patients. The study –“2017 Pharmaceuticals and Life Sciences Trends”– indicated some companies have started the work required to adapt.
“[P]harma companies will have to become more proactive with large communities of patients and go beyond lip service in meeting the needs of a wide swath of consumers,” the report said.
This study predicted the reexamination of product value, pricing and distribution will play a significant role in the pharma industry moving forward, all taking into consideration the communication needed with patients.
“Pharma companies that succeed in patient engagement efforts increase their chances of regulatory and commercial success,” the report from PwC.

With the appointment of Scott Gottlieb as the new commissioner of the FDA, a variety of changes and updates have taken place in the agency. One of the most critical for the pharmaceutical industry has been the move to push competition in the market through the development of generic drugs.
The FDA published a list of drugs in need of generic candidates, essentially providing companies a guideline on which current drugs had the option to be adapted to a cheaper model.
“If consumers are priced out of the drugs they need, that’s a public health concern that FDA should address, within the scope of its mandate and authorities,” Gottlieb said in a letter updating the generic drug development plans from the agency.
It seems clear this is an issue the FDA plans to continue addressing moving forward. This could open the doors for drug makers to seek untapped areas of care and provide cheaper options for patients.

Investors in the pharmaceutical sector know the development time and costs of the industry make it hard to make quick gains, patience is needed with this market. While 2017 had a lot of uncertainty, an aging population with rising treatment needs and a new tax plan may provide a boost for the industry moving forward.
Don’t forget to follow us @INN_LifeScience for real-time news updates!
Securities Disclosure: I, Bryan Mc Govern, hold no direct investment interest in any company mentioned in this article.