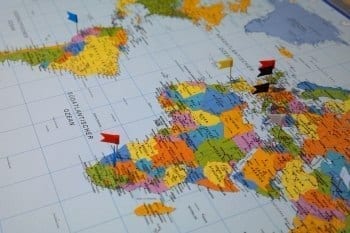 The medical device industry is concentrated in the US, which holds a 45 percent share of the market. But keep an eye on emerging markets too.

As aging populations and longer life expectancies worldwide continue to expand, medical needs also expand the need and use of medical devices. This year has already seen a 10 percent increase from last year and looks to continue growing.
Interestingly, the industry has a relatively low level of concentration, meaning that no one firm dominates the market. That said, the top medical device companies are concentrated in the US, which holds a 45 percent share of the market, according to the International Trade Administration’s 2016 report.

Medical device exports were valued at $45 billion in 2015 for the US, the largest and most developed supplier of these technologies. The country also hosts seven out of the 10 largest manufacturers in the area.
Despite its prominence and leadership in the market, the situation in the States is complicated for manufacturers due to the issue of taxation. As explained in the Investing News Network’s (INN) Medical Device Outlook 2018, pointed to the 2.3 percent tax for medical device manufacturers, which made its return at the start of 2018.
The tax made its returns despite criticism from lawmakers and medical industry insiders. The Advanced Medical Technology Association lobbying group has demanded Congress to reevaluate the bill and has campaigned for its removal. In their eyes, the tax has a negative impact on the development of the industry.
“This is a tax on innovation, a tax on jobs, and a tax on the health and well-being of millions of American patients. It makes no sense from either a health care or a tax policy perspective,” the association said in a statement supporting Senators expressing their distaste with the tax.
The tax made its return after the GOP failed to repeal Obamacare last year as part of one of the most heated battles in the American Senate and House of Representatives.
“Republicans would have automatically killed the tax if they had succeeded in repealing Obamacare last year. The levy remained in Republican-crafted tax legislation signed by President Donald Trump on Dec. 22,” a report from Reuters indicated. “Supporters of the tax say it has helped provide health insurance to millions of previously uninsured Americans.”

Including: 3+ stocks to watch as well as valuable market data   Get My Free Report Click here to download for free
A 2015 market report from MedTech Europe revealed there are almost 25,000 medical technology companies in Europe and 95 percent of those are small or medium-sized companies. The report estimated the valuation of the whole industry in Europe to be around €100 billion.
Japan continues to be a top market for the medical device sector. In 2013 their US exports were over $7.5 billion. The US International Trade Administration indicated due to the country’s aging population will keep the demand for “advanced medical technologies” going.
According to a Whitaker Institute’s report on the medical device industry, the medical device market will reach $440 billion by 2018.

According to a Whitaker Institute’s report, “manufacturers in developed countries are expected to continue to pursue a greater share of their sales revenue from [these] emerging markets.”
Furthermore, markets in China, India, and Brazil are expected to be the drivers of the sector for the next half-century. “Although consumer confidence still lies with western brands, this trend will inevitably shift towards brands from these emerging economies,” the report states.
A report from the EU SME Centre indicated medical device sales in China reached €36 billion by the end of 2014, approximately $40,140,000 USD. However, the same report indicates Chinese officials have sought for local companies to have success in this developing area.
According to the US International Trade Administration China is the eight medical device export market in the whole world.
India has risen to be targeted as a potential top market. In an interview, earlier this year with the Business Standard Dr. Himanshu Baid, managing director with Poly Medicure said new government policy and rules in the country would allow an increase in investment for health care.
“The Indian medical devices industry has huge potential to grow and be among the top 5 medical devices manufacturing hubs globally,” Baid said. “It can also significantly contribute to GDP of the country that will result in fulfilling the government’s vision of healthy India.”

Despite the dominance of the US and European markets, more and more devices gain more by being able to be easily transported into emerging markets where medical needs are just as pressing.
Jonathan Medved, founder, and CEO of OurCrowd, a crowdfunding website, explained to Bloomberg, “[t]raditionally, people have been very focused on the U.S. market, but now making sure a device is efficient enough to be sold in places like India and China is critical. If you build it for the U.S. market, someone will ambush with a more efficient product for emerging markets.”
Don’t forget to follow us @INN_LifeScience  for real-time news updates.

This is an update of an article originally published in 2015.

2 responses to “Best Regions for the Top Medical Device Companies”