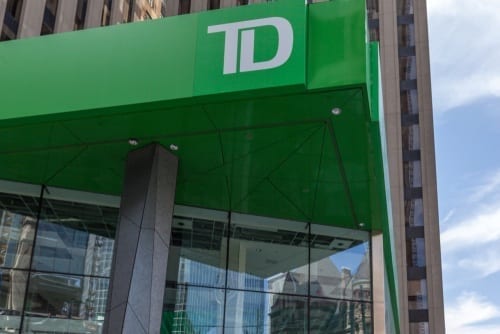 A new report indicates Toronto-Dominion (TD) Bank has added 13 cannabis stocks to its allowed list of recommendations for advisers to investors.

A major Canadian bank has changed its sentiment on cannabis stocks and increased its list of recommended stocks, report says.

Toronto-Dominion (TD) Bank has added 13 cannabis stocks to a list its advisers use as guidance before recommending to investors, a report from The Globe and Mail indicated on Sunday (July 1). This list now includes a total of 16 cannabis listings across the Canadian public markets.

According a spokesperson for TD, in order to qualify for the bank’s list stocks can only be listed on the Toronto Stock Exchange (TSX) or TSX Venture Exchange, removing the Canadian Securities Exchange (CSE) and the Aequitas NEO Exchange.

The report also indicates none of the four leading Canadian marijuana exchange-traded funds (ETFs) made it into the TD list.

US exposure leaves two major cannabis companies off the list

Issuers will also be required to not have any sort of exposure into the US cannabis producing market. Despite several states legalizing the drug and a grassroots movement to legalize it completely, under the federal umbrella cannabis remains illegal.

Due to this restrictions, Aurora Cannabis (TSX:ACB) and Aphria (TSX:APH) were excluded from the TD list despite being two of the biggest market-cap companies in the space. Combined, the two producers amount to nearly a $C8 billion market-cap and trade on the TSX.

In February Aphria dumped its US assets after a standoff with Canadian market regulators over the legality of listing on the TSX and owning an interest in the technically illegal market.

The Canadian producer was forced to sell an Arizona-based cannabis producer and has set out to eliminate its stake in Liberty Health Sciences (CSE:LHS). Aphria sold 26,716,025 shares it owned in Liberty Health, leaving the company with a 28.1 percent interest in the US operator, set to be divested after a lock-up period is completed.

Aphria intended to sell its stake of Copperstate Farms, the Arizona producer to Liberty Health. However, shareholders of Copperstate voted against the purchase and exercised their right of first refusal.

Similarly, in June, Aurora announced it will be divesting its shares and warrants of subsidiary Australis Capital, an investment company seeking assets and interest in the real estate and cannabis sectors in the US.

This year, after the Aphria dispute with the TMX Group, the Canadian Securities Administrators (CSA) issued an update on the stance of cannabis companies with association to the US market.

“A disclosure-based approach remains appropriate in the current circumstances,” CSA chair Louis Morisset said after the regulator reviewed the delisting potential and risk scenarios of these stocks.

However, in order to maintain a TSX or TSXV listing, cannabis companies still can’t hold interest below the border. Cannabis stocks in the CSE benefited from the CSA ruling and even enjoyed a newfound bullish sentiment from financial experts.

Despite earlier in the year showing a hesitation to recommend these stocks, TD has turned around and accepted them now in terms of what its advisors can recommend to investors.

“Our most recent update reflects our ongoing evaluation of this emerging market,” TD spokesman Paolo Pasquini told The Globe and Mail. “We expect our views will continue to evolve and develop with the industry.”

Editorial Disclosure: Emblem, Naturally Splendid, Harvest One Cannabis and The Supreme Cannabis Company are clients of the Investing News Network. This article is not paid-for content.