Supply issues and high retail costs have caused a US cannabis multi-state operator (MSO) to pull back its operations in key states.

Following the release of its Q3 2019 report on Tuesday (November 26), California-based MedMen Enterprises (CSE:MMEN,OTCQX:MMNFF) confirmed it would be scaling back its operations in Florida and in its home state, as the company attempts to limit its cash flow.

Revenue for Q3 was at US$44 million in Q3, representing a 5 percent increase quarter-over-quarter, while adjusted earnings before interest, taxes, depreciation, and amortization (EBITDA) losses were at US$22.2 million, excluding US$7.4 million in rent expenses.

During a call with investors and analysts after the markets closed on Tuesday, CEO Adam Bierman said though MedMen has several current licenses in Florida, the company is getting in its own way because of a lack of stock. 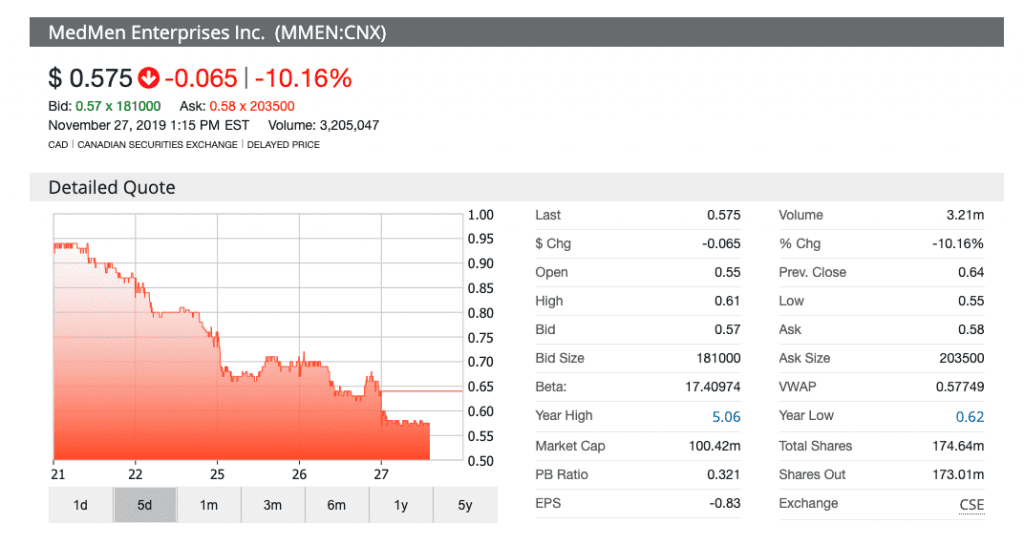 “The only limiting factor in Florida today has been our own supply of product,” Bierman said.

MedMen currently has licenses for 35 retail locations in the coastal state, eight of which are in operation with a ninth coming online in the next few weeks, he said.

Florida expansion for the company stops there, however.

“We will not be opening additional Florida stores beyond nine for the foreseeable future given the limitations on supply,” said MedMen CFO Zeeshan Hyder.

Though it’s currently a medical-only state, Florida has been praised by analysts for the quick growth of is cannabis space and has seen staggeringly positive results from Florida-based Trulieve (CSE:TRUL,OTCQX:TCNNF).

Hyder said the expansion freeze is a part of a wider strategy to cut down on retail operation spending, though the company expects to be on an annual US$300 million retail run rate by the end of calendar 2020 barring any licensing or regulatory issues.

MedMen also plans to divest itself of non-core assets, Hyder explained, which includes the recent US$14 million sale of its interest in a cannabis real estate investment trust it helped form this year, Treehouse REIT.

The company is also delaying major capital intensive projects, said Hyder, which means postponing retail store expansions that aren’t core to the business, including a halt on its build out plans in Florida.

When asked about the difference between core and non-core assets, Hyder said the company assesses whether or not an asset is going to generate significant revenue or EBITDA in the next two years to get a sense of its value.

With this new conservative operations plan, Hyder said the firm expects to save about US$55 million in capital expenditure.

In California, Bierman said that along with legal retailers, the company still has to contend with a robust illicit market.

Like Florida, MedMen’s operations California will also take a hit, Hyder said. As a part of the new strategy to focus on core businesses, MedMen will prioritize its highest return on investment licenses, including locations that could generate over US$10 million in sales once they’re opened.

The new expectations mean that MedMen will be pulling back from its California expansion as well.

“Having a higher threshold for new store openings and store expansion will likely result in a scaling back of our target of 30 stores in California by the end of calendar 2020 and delaying certain expansions,” Hyder said.

Retail locations in both Florida and California, as well as Nevada, were a part of MedMen’s recent downsizing to save on payroll expenses. Over 175 retail employees were cut and Hyder said the company is planning further staff reductions.

MedMen does have plans to expand into Illinois, however. The state is the most recent to legalize recreational cannabis use, and analysts have been bullish about future investment opportunities. MedMen plans to open three more stores in Illinois, bringing its total to four locations in the state.

Cresco Labs (CSE:CL) (OTCQX:CRLBF) (“Cresco” or “the Company”), one of the largest vertically integrated multistate cannabis operators in the United States, announced the hiring of CPG industry veteran Ty Gent as the Company’s new Chief Operating Officer (“COO”). As COO, Gent will be responsible for operational consistency and efficiency across markets and implementation of structural enhancements to facilitate scaling.

HempFusion Wellness Inc. (TSX:CBD.U) (“ HempFusion ” or the “ Company ”), a leading health and wellness CBD company utilizing the power of whole-food hemp nutrition, is pleased to announce that its wholly owned subsidiary, Probulin Probiotics, LLC (“ Probulin ”), has increased its product selection in certain brick and mortar locations and expanded its distribution on Amazon through a unique eCommerce store within the Amazon platform. The broader product selection is available in major brick and mortar stores including Sprouts and Fresh Thyme and includes the Company’s new Probulin Total Care Immune product.

MustGrow Biologics Corp. (CSE: MGRO) (OTCQB: MGROF) (FSE: 0C0) (the “Company”, “MustGrow”) is pleased to report third party confirmatory studies that the active ingredient in MustGrow’s mustard plant-based technology, Allyl Isothiocyanate (“AITC”), has a positive impact on soil health, contributing to the environmental and ecological security of both our plant-based food supply and the planet. Application of natural AITC returns organic plant material to the soil through its pre-plant treatment process as a potential alternative to using synthetic chemicals.

Soil micro-organisms play an important role in soil fertility and plant health, contributing to natural soil processes including the formation of organic matter and nutrient transformation. Human activities, including chemical pesticide use, can adversely impact the soil microbial diversity and structure.

Heritage Cannabis Holdings Corp. (CSE: CANN) (OTCQX: HERTF) (“Heritage” or the “Company”), today announced that its subsidiary CannaCure Corp. (“CannaCure”) has entered into a binding letter of intent with Entourage Participações S.A. (“Entourage Phytolab”) for a three-year extraction and finished product supply agreement (the “Agreement”) for the distribution of pharmaceutical products in Brazil.

Better Plant Sciences Inc. (CSE: PLNT) (OTCQB: VEGGF) (FSE: YG3) (“Better Plant”) or (the “Company”) Is pleased to announce its partially owned subsidiary NeonMind (CSE: NEON) (“NeonMind”) has common shares now trading on the Frankfurt Stock Exchange (the “FSE”) under the symbol “6UF”. As a result, NeonMind’s common shares are now cross-listed on the Canadian Securities Exchange and the FSE. Shares of Better Plant are available on the FSE under the symbol “YG3”.