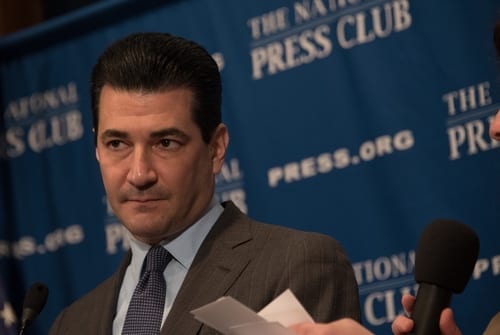 The FDA loses its leader as the challenge for regulation on hemp-derived CBD products for the health and wellness market increases.

With the departure of the US drug police leader, the future of of the hemp-derived CBD products hangs in balance.

On March 5, US Food and Drug Administration (FDA) Commissioner Scott Gottlieb announced he would be stepping down from the agency after just a two-year stint atop the FDA.

His departure comes in the path of hemp legalization and its derivatives, more crucially CBD products for the health and wellness market.

Even before the official legalization, countless CBD products were already sold with some breaching policy by advancing medical benefit claims attached to the product.

This had created a status of uncertainty regarding the regulation of CBD health and wellness products. With the legalization of hemp through a US$867 billion farm bill, one analyst expected to see the FDA step up to the regulatory challenge.

Alan Brochstein, cannabis analyst with 420 Investor, called Gottlieb’s decision “disappointing” as he expected the FDA to set up guidelines and rulings on these hemp products.

“Most believed that the path forward under Gottlieb’s FDA would allow for CBD to be sold as nutritional supplements under certain conditions but that the FDA would play a greater role on the regulatory side,” the analyst wrote in his weekly New Cannabis Ventures email column to investors.

Brochstein added that a combination of the uncertainty from Gottlieb’s retirement and lack of clarity from the federal powers, “the status of hemp and CBD at the state level is in disarray.”

During a segment on “Squawk on the Street” on CNBC, Bruce Linton, co-CEO of Canopy Growth (NYSE:CGC,TSX:WEED), said while it’s uncertain what will come from FDA regulation, the states have a task to fulfill as well.

“About three or four weeks ago New York State started [cracking] down on people selling CBD with no source that was legit because they are going to govern it in New York State… because I think their intent is to be able to say ‘put the word CBD but don’t claim a medical outcome, but tell us the ingredients,’” the Canadian executive said.

Canopy Growth has announced an expansion in New York to invest between US$100 million and US$150 million for hemp production. Additionally, the company signed a collaboration agreement with Martha Stewart for the development of CBD products.

Linton explained due to the size of this new market, states will have to determine whether or not they will enforce regulations or, in this case, wait for the FDA.

Preet Marwaha, CEO and founder of Blue Sky Biologicals, a hemp focused company, told the Investing News Network (INN) one way or another the FDA will have to get involved in regulation duties.

“When the FDA does come down hard, the first people that are going to come down are all these companies that are making [false] claims,” Marwaha said.

The executive stressed stigmas and false claims will be driven away by more research and more effective clinical trials.

The executive told INN the FDA approval for GW Pharmaceuticals’ (NASDAQ:GWPH) CBD medicine epidiolex has already put pressure on the agency to deliver on its guidance.

Even with comparisons to a wild west, this market has drawn the attention of investors looking to capitalize on the growth in popularity for these products.

“It really does seem like the last few months everyone is focussed on CBD and hemp,” Greg Taylor, chief investment officer of Purpose Investments and portfolio manager of the Purpose Marijuana Opportunities Fund (NEO:MJJ) told INN.

Neal Gilmer, cannabis analyst with Haywood Securities, previously told INN he was bullish on the entire CBD space thanks to the amount of anecdotal information already swaying consumers.

“Despite all of the legal uncertainty, we have noticed several publicly-traded companies suddenly morph into CBD companies, and investors have piled into some of these stocks just on the announcements,” Brochstein wrote.