Curaleaf Jumps After Reporting US$55 Million in Q2 Revenue

Shares of Curaleaf Holdings (CSE:CURA,OTCQX:CURLF) rose as the multi-state operator (MSO) reported revenue of US$55.1 million for the Q2 period on Wednesday (August 28).

Curaleaf opened the trading session at a price of C$8.50 per share and, as of 1:40 p.m. EDT, prices were sitting at C$9.31, representing an almost 9 percent value increase.

The results, which were released after trading hours on Tuesday (August 27), delighted investors as revenue jumped 35 percent from Q1 to reach US$40.7 million. The company said the increase is the result of its expanding footprint and improved operating margins.

The MSO has continued its expansion in the US with costly planned acquisitions in key states.

During an earnings call with investors, Curaleaf CEO Joseph Lusardi said that, following the planned purchase of Illinois-based GR Companies (Grassroots) and the Select brand of adult-use cannabis products, the US cannabis firm will operate in 19 states in total. 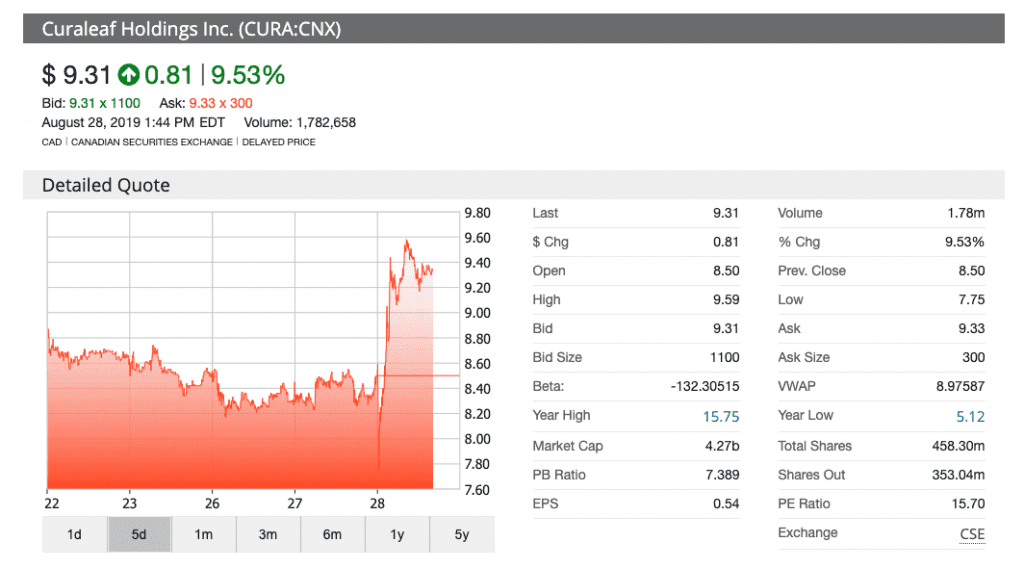 Curaleaf made one of the biggest moves in the US cannabis space last month when it confirmed its planned acquisition of Grassroots in a cash and stock deal priced at US$875 million.

According to the MSO, once the transaction is completed, Curaleaf will be the world’s largest cannabis company by revenue and the largest in the US across key operating metrics.

Boris Jordan, the company’s chairman, said Curaleaf expects pro forma revenue of over US$1 billion by the fiscal 2020 year due in part to its recent purchases and expansion plans.

Despite the rosy outlook for the company’s revenues, its net loss grew from Q1 2019. Losses in the second quarter totaled US$24.4 million, a 281 percent increase from Q2 2018. Curaleaf has attributed the losses partly to acquisition costs and a US$5.8 million depreciation.

During the conference call, Curaleaf CFO Neil Davidson said the company is focusing its expansion efforts on the key states of Arizona, Florida, New Jersey and New York, where medical programs and discussion around legalizing adult-use consumption are developing quickly.

The MSO’s home state of Massachusetts continues to be the largest market for Curaleaf. The company cultivates almost 39,000 pounds of flowers in the eastern state.

Florida was also a driver of growth for the MSO, said Lusardi. Curaleaf has 25 stores across the state — which has been hailed as a key state in the marijuana market — and recent upgrades to its facility in Florida have positioned the company to produce almost 100,000 pounds of flower yearly.

In July, the MSO experienced a hiccup when it received a warning from the US Food and Drug Administration (FDA) for selling “unapproved” and “misbranded” cannabis products, while making unsubstantiated claims about the health benefits of hemp-derived cannabidiol (CBD).

Some of the products were not approved by the federal regulator and were found to be in violation of certain sections of the Federal Food, Drug and Cosmetic Act.

The federal regulator also flagged Curaleaf for claims across several of the company’s web pages about CBD’s ability to treat conditions such as chronic pain, ADHD and breast cancer.

Lusardi reassured investors that, upon receiving the letter from the FDA, the company quickly took action to address the concerns.

“The majority of the FDA concerns were focused around marketing of our CBD products and pointed to third-party content that was linked to our website. We have removed all such content,” said Lusardi.

Lusardi also told investors that, months prior to the FDA warning, Curaleaf completed an internal review of its products and discontinued sales of vape pens and soft-gel products. The company has also made changes to its product labeling and descriptions based on the review.

TipRanks analysts have the MSO listed as a “moderate buy” with a price target of C$12, which represents a 71 percent upside over the current share price.

Trulieve to donate $20,000 in scholarship funding and $15,000 to support leadership development

Trulieve Cannabis Corp . (CSE: TRUL) (OTC: TCNNF), a leading and top-performing cannabis company in the United States today announced a new partnership with the Thurgood Marshall College Fund (TMCF), the nation’s largest organization exclusively representing the Black College Community. Trulieve will donate $20,000 to help fund several college scholarships awarded to students who are attending one of the organization’s member-schools as part of Trulieve’s diversity, equity, and inclusion initiatives. The $15,000 in talent funding is earmarked to support TMCF’s internship program, reaching a diverse talent pool of students and alumni from their 47 member-schools to provide immersive experiences at Trulieve.

Trulieve Cannabis Corp. (CSE: TRUL) (OTCQX: TCNNF) (“Trulieve” or “the Company”), a leading and top-performing cannabis company based in the United States announced today the opening of a brand-new Florida dispensary, the Company’s 80th nationwide. The new location marks the Company’s first in Tamarac and third in Broward County expanding patient access to Florida’s largest and broadest assortment of high-quality medical cannabis products.

Revive Therapeutics Ltd. (“Revive” or the “Company”) (CSE: RVV, USA: RVVTF), a specialty life sciences company focused on the research and development of therapeutics for medical needs and rare disorders, is pleased to announce an update on the Company’s U.S. Food & Drug Administration (“FDA”) Phase 3 clinical trial (the “Study”) to evaluate the safety and efficacy of Bucillamine in patients with mild to moderate COVID-19.

With its recent $23 million dollar financing, the Company plans to aggressively expand from 14 clinical sites to up to 50 clinical sites to meet the next enrollment goals for the Study in Q2-2020. The Study is a randomized, double-blinded, placebo-controlled trial and the safety and efficacy data analyzed at each interim analysis timepoint of 210, 400, 600 and 800 completed patients are only made available to the Independent Data and Safety Monitoring Board (“DSMB”) for review and recommendations on continuation, stopping or changes to the conduct of the Study. In the event of any serious safety concerns, the DSMB would be notified to determine any risks and provide its recommendations. To date, in this initial 210 interim point there have been no serious safety concerns that required the DSMB to be notified.

HempFusion Wellness Inc. (TSX:CBD.U) (OTCQX:CBDHF) (FWB:8OO) (“HempFusion” or the “Company”), a leading health and wellness CBD company utilizing the power of whole-food hemp nutrition, is pleased to announce that its common shares have been approved for DTC full-service eligibility in the United States by the Depository Trust Company (“DTC”) and can now be both traded and serviced through DTC’s electronic book-entry system.

DTC is a subsidiary of the Depository Trust & Clearing Corp. (“DTCC”) that provides clearing and settlement services for the financial markets and settles the majority of securities transactions in the United States. This electronic method of clearing securities speeds up the receipt of stock and cash and thus accelerates the settlement process for investors and brokers, enabling the stock to be traded over a much wider selection of brokerage firms.