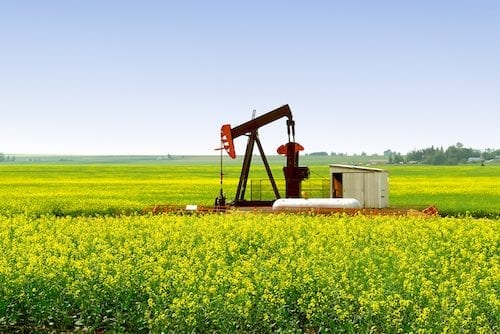 Alberta is looking to rail to access markets as Canadian benchmark oil prices continue to struggle.

Alberta’s oil industry growth is being hamstringed by a lack of infrastructure in the face of growing production, making market access a serious challenge that’s having a negative impact on Western Canadian Select (WCS) crude prices compared to other North American blends.

“A shortage of pipeline capacity and oilsands production growth has led to bottlenecks that widened the usual price gap between Canadian crude and the American benchmark,” reports the CBC. Alberta Premier Rachel Notley has been calling for an immediate solution. “There’s a lack of consensus within the industry about the best way forward, meanwhile we have a suite of options at our disposal. We don’t want it racing out of the ground at $10 a barrel.”

The Alberta government under Notley is pushing for the Trans Mountain pipeline expansion that would transport oil from Edmonton to Burnaby, BC to access markets from the Pacific. The expansion would almost triple the pipeline’s capacity to 890,000 barrels per day (bpd). However, the expansion has been stalled by a Federal Court of Appeal decision in October 2018, which reversed Canada’s approval of the Trans Mountain pipeline based on the need for more consideration of marine shipping in the environmental review and a lack of in-depth consultation with First Nations.

The impasse has created a supply glut that in turn has led to a huge price differential for WCS compared to West Texas Intermediate (WTI). Historically, discounts for WCS compared to WTI have been par for the course, due in part to transportation and refining costs, with a barrel of WCS selling on average US$17 less than a barrel of WTI over the past ten years, according to The Globe and Mail. However, that gap has risen to as high as US$50 per barrel in the fall of 2018, pushing price per barrel down as low as US$13 in November — the lowest price point for WCS in a decade.

The WCS is the benchmark for Canadian heavy-oil products, which represents about fifty percent of the country’s crude production. Comparable to WTI in quality and cheaper to refine than WCS, Edmonton Mixed Sweet and Synthetic Crude are two lighter oils that account for about 40 percent of Canada’s total crude output. They are also selling at a deep discount to their US counterparts. According to a TD Economics Report, differentials for Edmonton Mixed Sweet over the past four years have averaged US$4 per barrel, but in November that price gap widened to a record-breaking US$39. The Synthetic Crude price differential also broke a record to hit $34 per barrel.

With an estimated overhang of 250,000 bpd in production, Premier Notley has said the impact of the growing price gap is costing the Canadian economy $80 million per day, although that figure has been strongly refuted by others such as long-time economist Robyn Allan. In late November, the Albertan government announced it will purchase $350 million in rail cars in order to move 120,000 bpd of crude from the province to US markets.

A recent report by Scotiabank says that if the huge price discounts persist into the new year, the federal government with need to take action to reduce the blow to Alberta’s royalty revenues that are likely to come as oil companies lose earnings. CBS reports that some of the region’s oil producers are even calling on Notley “to mandate production cuts to help shrink [the] oil glut” in order to ease prices.

A different story for Canadian oil producers in Mexico

While falling prices for Canadian crude oil will no doubt negatively impact the earnings for Canadian producers, companies with operations in the Mexican market, newly opened to foreign investment, are finding they are not exposed to the same infrastructure and market access challenges. “Oil companies working in Mexico are not subject to the low-price environment plaguing Canadian oil producers right now and therefore have the potential for better netbacks,” Steve Hansen, CEO of International Frontier Resources (TSXV:IFR,OTCQB:IFRTF), told Investing News Network. “In fact, Mexico’s oil prices are some of the best in North America.”

Mexico ranks third in the western hemisphere for oil production and holds the region’s fourth-largest oil reserves. For decades, however, it has experienced declining oil outputs, even though plenty of oil remains in the ground. In 2013, faced with deteriorating oil production and reserves, then president Enrique Peña instituted massive reforms to open up Mexico’s rich oilfields to the private sector. Despite concerns, current President Andres Manuel Lopez-Obrador is not expected to go back on the concessions granted to foreign oil companies under the past administration.

In 2018, through an industry-leading joint venture, Canada-based International Frontier became the first foreign company in over 80 years to drill onshore conventional oil under license contract in Mexico. Through its 50/50 partnership with Grupo IDESA — one of Mexico’s largest petrochemical companies — International Frontier Resources joint venture Tonalli Energia was awarded the Tecolutla block in the Tampico-Misantla Basin during the first onshore bid round. Tonalli is now producing from its TEC-2 legacy well at the Tecolutla asset. Production testing is underway at its TEC-10 directional development well as well as drilling on TEC-11, the first horizontal well of a potential multi-well drilling program for the Tecolutla block.

Early in 2018, the Mexican government used $1.8 billion from its budget stabilization fund to hedge future crude oil prices in 2019. Known as the “Hacienda Hedge,” Mexico has done well with this program in the past, earning $5 billion in 2009 following the global market crash. In 2015, during OPEC’s “war for market share that sent prices tumbling,” according to Bloomberg, the program fetched the country a record $6.4 billion.

López Obrador has said the oil hedging program will continue during his administration. He has also said that his energy platform will include building up the country’s domestic oil industry through new refineries, raising oil production and cutting back on foreign oil imports. López Obrador is looking to increase domestic crude oil production levels from 1.8 million bpd to 2.4 million bpd in 2024. But to increase Mexico’s oil production, it will need the help of foreign companies and the private sector.

The lack of market access for growing production in Alberta’s may be putting a significant damper on Canadian benchmark oil prices, but Mexico’s oil market growth story has plenty to offer investors.

This article was originally published on the Investing News Network in December 2018.