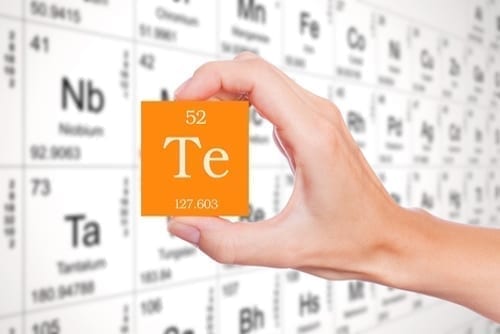 The tellurium market may be virtually unknown, but the metal’s possible uses are vast when it comes to addressing the world’s energy and water challenges.

Tellurium is proving vital for solar energy and a potential game-changer for water desalination technology, making the tellurium market key to the development of a more sustainable economy.

Although tellurium represents one of earth’s rarest elements, the global tellurium market is expected to grow by a compound annual growth rate of 3 percent between 2018 and 2022. Much of this growth is coming from the metal’s use in solar panels, but new tellurium applications under development are expected to drive long-term demand.

Worldwide tellurium demand is already beginning to creep up. Tellurium imports to the United States increased by 55 percent in 2017 with the majority coming from Canada and China, and the US has also listed tellurium as a critical metal. As a result, the US Geological Survey (USGS) reports that the average price of the metal increased from $30 per kilogram to $40 per kilogram in the first seven months of 2017. In its January 2018 report, Argus Metals International assessed tellurium prices to be moving up into a $40 to $60 per kilogram range on strong restocking demand.

The biggest chunk of the tellurium market: solar energy

Tellurium is used in a variety of products including mobile phones, LED displays and projectors, wearable electronic devices, rewritable optical (think CDs, DVDs and Blu-ray), gaskets, lighting, rubber production, thermo-conductors and for the new generation of random access memory (RAM) known as phase change memory chips. However, the solar photovoltaic (PV) industry consumes the biggest portion, according to USGS, accounting for 40 percent of total end use.

Tellurium alloyed with cadmium forms the compound cadmium-telluride (CdTe), a highly conductive compound when exposed to sunlight. Of all the solar technologies, CdTe solar panels are the most efficient and have the smallest carbon footprint, lowest water use and shortest energy payback time. These factors, according to the National Renewable Energy Laboratory, make CdTe the second most-used solar material in the world next to silicon.

First Solar (NASDAQ:FSLR) was the first company to prove the compound’s economic viability in 2002 when it began mass commercial production of CdTe solar panels. The Arizona-based company stands to benefit greatly from a few recent developments in the US based solar energy space.

While the solar PV market currently drives tellurium demand, emerging applications for the metal — especially for batteries and water desalination — may play a major role in future tellurium demand.

The consumer electronics market is expected to reach $1.5 trillion by 2024, as rapid global urbanization brings increased demand for smartphones, tablets and wearable devices. Advancements in electronics technology is also leading to advancements in battery technology as the industry looks for ways to improve energy storage capabilities.

Researchers are investigating the use of tellurium to further enhance the performance, lifespan and storage capacity of rechargeable lithium-ion batteries. Tellurium electrodes are found to have higher energy densities and can be charged and discharged faster than more commonly-used electrode materials. A collaborative team of scientists out of Southwest University in China and MIT in the US recently published a study in the Energy Storage Materials journal which investigated how tellurium can increase energy storage capacity as well as battery lifespan.

Desalination technology may prove to be the most important 21st century use in the tellurium market yet.

New research around tellurium-based nanoparticle technology has the potential to play a critical role in solving the world’s fresh water crisis.

By 2030, there will be a 40 percent gap between water demand and available water, according to the United Nations. By 2050, over 40 percent of the world’s population will live in severely water-stressed river basins. The UN reports that “worldwide, the total cost of water insecurity to the global economy is estimated at US$500 billion annually.” While fresh water only makes up about 2.5 percent of the total water on the planet, desalination technology offers a possible solution by harvesting the potential of the earth’s massive amounts of seawater.

The biggest roadblock to the mass commercialization of desalination is high energy costs — which represent more than half the operating costs for a desalination plant.

Researchers at the Sun Yat-sen University in China have found that tellurium nanoparticles can enhance the solar thermal process which uses sunlight to convert water into steam as part of the desalination process. In fact, the researchers have reported that dispersing tellurium nanoparticles into the water increased the water evaporation rate by a factor of three — making it possible to heat the water from 29 degrees to 85 degrees Celsius in under two minutes — and reducing the energy requirements to a mere one-tenth of the current method.

“Desalination may be a game-changer for the tellurium market,” Deer Horn Capital (CSE:DHC) President and CEO Tyrone Docherty told Investing News Network. “Cell phones, laptops and flat screen TVs are wants, but fresh water is a need for billions of people.” The company’s Deer Horn property is recognized by First Solar as one of the top four primary tellurium properties in the world. “If the water desalination proves the way to go, governments and health organizations are going to get behind it because, again, it’s a need not a want.”

China Russia, Japan, Canada and Sweden together produce most of the world’s tellurium supply. The USGS points out that global tellurium production can be a tricky figure to tally as not all companies and countries report production and sometimes scrap and semi-refined products are included in refined metal data. Doing its best to estimate worldwide tellurium production, USGS pegs the total at about 420 tons in 2017. The current global tellurium supply is sufficient to meet demand levels as they stand today; however increased long-term demand out of the solar panel and batteries markets as well as emerging technologies are expected to put pressure on available tellurium resources.

Traditionally, tellurium market supply has been directly tied to the production of copper. That’s because more than 90 percent of its production comes as a by-product of electrolytic copper refining with China as the leading source. However, as copper grades decline, copper miners are turning to different refining methods that do not recover tellurium. This is pushing tellurium end-users like First Solar to look for primary tellurium deposits.

“First Solar some years ago was looking to get into the mining business themselves for primary sources of tellurium so that they weren’t dependent on copper,” said Docherty. “They ultimately decided that would be stretching their resources; however, they still are in need of primary supplies.”

A primary tellurium operation is even more of a rare occurrence than the metal itself. Today, there are only two areas of the world where significant quantities of tellurium are recovered as primary ore: Apollo Solar’s (HKEX:0566) tellurium mine at Dashuigou in southwestern China; and at the Kankberg deposit, operated by Boliden (STO:BOL), located in Sweden’s Skellefte VMS district. Boliden’s future tellurium production is tied up in existing offtake contracts, so they will not meet any of the upcoming market demand.

Canada is the leading exporter of tellurium to the US, with the majority of that coming as a by-product of copper production. However, British Columbia hosts a number of high-grade tellurium-supported copper and gold prospects that have the potential to contribute significantly to the global tellurium market.

Sustainable energy and water sources are becoming increasing vital as we enter a new era of human history and will require the development of advanced technologies. Those technologies will in turn require critical metals like tellurium. This increasing global demand combined with a looming supply shortage represents an opportunity for explorers serving the tellurium market to fill the gap.

This article was originally published by the Investing News Network in October 2018.