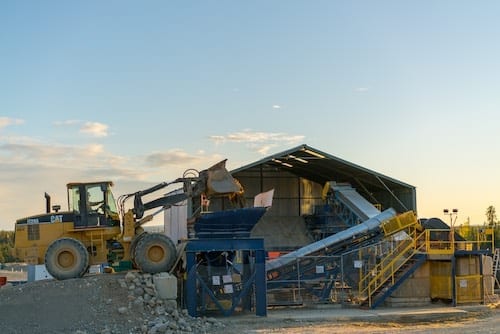 The benefits of bulk sampling in gold exploration are being realized in Canada’s Yukon, where high-grade gold discoveries are underway.

For true gold grade confidence, resource companies must look beyond the drill to see the many benefits of bulk sampling in gold exploration.

Bulk sampling is an underused and undervalued mineral exploration tool that allows geologists to investigate the metallurgical properties of a deposit and retrieve critical technical information.

The bulk sampling process involves the one-time extraction of a large amount of mineralized rock — generally ranging between hundreds of tonnes up to 100,000 tonnes — from a mineral claim in order to collect sufficient material for metallurgical testing. A bulk sample gives you information about the actual and true grade of the ore on any project where drilling alone often does not, especially in respect to higher grade deposits. However, bulk sampling programs deliver much more than just higher-grade confidence.

The role of bulk sampling in the gold exploration process

The most important question bulk sampling can answer is whether or not mining a prospective deposit would be both feasible and profitable, which makes it one of the most effective exploration tools for de-risking gold exploration projects.

Bulk sampling provides resource companies with sufficient materials to conduct metallurgical testing–a critical component of successfully transforming an exploration-stage project into an operating mine. The data collected can help geologists better understand a deposit, mapping out a three-dimensional picture of in terms of geometry, structure and mineralization. The results can help mine engineers determine the most optimal milling methods and flow sheet design which can have a huge impact on capital and operating costs as well as a project’s environmental footprint.

Positive metallurgical testing results reveal a lot to the market about a future operation’s potential to make money. This level of confidence can’t be attained with any other exploration technique.

A lot of Investors have the perception of “drill baby, drill” as the best way to advance a project. Coupled with this is the fact that the securities regulatory framework often influences a rush to a NI 43-101 resource estimate — a process that requires several drill campaigns and not much emphasis on metallurgical knowledge or a three-dimensional understanding of the deposit’s geology. In addition, many early-stage exploration companies have technical teams that may not have the requisite skills to conduct bulk sampling programs.

But mainly the reluctance is due to cost. Extracting and processing bulk samples is expensive compared to other exploration techniques such as drilling and trenching. On top of that, many Canadian mineral exploration companies rely on flow through funding of which bulk sampling is not fully eligible as an exploration expense.

For all of these reasons, those companies that do end up initiating bulk sampling programs usually wait until the feasibility stage of a project.

Bulk sampling during early-stage exploration can provide powerful insight and the ability to advance a challenging project at a much quicker pace.

“Bulk sampling can be compared to the old adage of ‘a picture is worth a thousand words’. It helps answer several critically important questions right up front; all of which lead to whether or not the project can be mined economically — a question we believe should be answered earlier rather than later,” Janet Lee-Sheriff, Chief Executive Officer of Golden Predator Mining (TSXV:GPY), told Investing News Network. “All the drilling in the world will not answer that question. You need both drilling and bulk sampling, especially on a project like our 3 Aces.”

Golden Predator’s 3 Aces Project is an orogenic gold project with district-scale potential covering 35,700 hectares in southeast Yukon, Canada. The company’s 2016 bulk sampling program at 3 Aces recovered 953.4 troy ounces with an average gold grade of 46.18 g/t and a greater than 85 percent recovery rate using chemical-free conventional gravity processing at a purpose-built offsite pilot plant. The high-grade gold at 3 Aces means the proceeds of the gold produced would at least partially offset the cost of the bulk sampling.

“Golden Predator has one big advantage in running a bulk sample so early in the process. Normally, bulk samples or pilot plant runs are only performed late in a feasibility and only if the financial institution really requires it. Generally, to prove what all the bench testing says and confirm it can be done on a continuous basis,” said Michael Redfearn, P.Eng. Redfearn is a 40-year veteran in the mining industry who oversaw the feasibility study for the Red Chris project and has held various senior positions at Cominco overseeing the Sullivan Mine, Trail Operations and the Red Dog mine.

By running the bulk sampling early on, Golden Predator has been able to identify the true grade of the deposit much earlier in the life of project. This is very attractive to the market and investors, placing a company like Golden Predator “well ahead of much of the exploration field,” added Redfearn.

Drilling vs. bulk sampling as a solution to the nugget effect

Golden Predator’s decision to begin bulk sampling at 3 Aces in the early stages of exploration was greatly influenced by the high-grade, nuggety nature of the gold mineralization found on the property. Known as “the nugget effect,” gold occurring in this manner is not distributed evenly throughout the deposit but is accumulated in clumps within the veins.

While the potential for significant gold production makes this type of mineralization attractive, the irregular and patchy distribution of the nuggets throughout the vein system can result in huge discrepancies even between adjacent drill holes. In addition, samples from conventional drilling are typically small in size, often leading to a high level of uncertainty when generating gold grade estimates for resource blocks.

Artemis Resources (ASX:ARV) and its Canadian joint venture partner Novo Resources’ (TSXV:NVO) learned that lesson the hard way at the Purdy’s Reward project in West Australia’s gold -rich Pilbara region. Novo’s first few drill results fell flat and the market responded with a savage sell-off. Since then the JV partners have initiated a AU$5.4 million exploration program to include large-scale bulk sampling after recognizing that this to be the best way to advance the project.

“The nugget effect for Pilbara gold poses a bit of a challenge, making it difficult to define a mineral resource estimate,” said Mike Cunningham, SRK Principle Geologist, in a presentation at the RIU Explorers Conference 2018. “Therefore, it’s hard to encourage money from investors because you need to obviously prove that you’ve got something worthwhile to invest in.”

Complex gold deposits like Purdy’s Reward and 3 Aces are generally characterized by strong structural controls on grade distribution. Using larger diameter diamond drilling, reverse circulation and fire assays may help but these methods are still subject to uncertainty of grade. Bulk sampling is likely the closest estimator of true grade.

In his presentation, Cunningham asserts that in gold systems containing a high nugget effect the best way to achieve a more representative assay of the deposit is to conduct large scale bulk sampling. Mike Redfearn agrees. “I have worked on ‘nugget effect’ ores a number of times and what is generally seen is that the larger the sample, the higher the grade. This is due to the loss of very fine gold and missing some of the nuggets in the drilling and sampling process,” he said.

Golden Predator’s 2016 bulk sampling program at 3 Aces proved that the gold was “free-milling,” which only requires crushing rock into the size of sand grains followed by running it through a gravity circuit and water to separate the gold from the rock. With no existing processing plant in the Yukon and faced with the economic challenge of shipping bulk sample materials to China, Golden Predator decided to build their own. The company’s plant consists of a closed system with a simple gravity circuit using water and no chemicals managed by a skilled team to run consistently at 50 tpd.

Lab results demonstrated that this chemical-free method could achieve recoveries of greater than 87 percent. Golden Predator is undertaking an approximately 6,000-tonne to 7,000-tonne bulk sampling program as part of the 2018 exploration campaign with the goal of reaching over 90 percent recoveries without the use of chemicals. “If the project can be successfully operated with water alone, it will not only provide cost savings, it will significantly reduce any environmental impact which will streamline permitting, and greatly benefit the First Nations and future mining in the Yukon,” said Lee-Sheriff.

Gold exploration companies who are looking beyond the drill to using bulk sampling in the early stages of a project have a lot to gain. This underused exploration tool has the ability to unlock shareholder value from a project years before a production decision. In fact, the wealth of metallurgical knowledge that can be retrieved through bulk sampling can help technical teams advance their projects at a much quicker pace.

One response to “True Grade Yukon Gold: The Benefits of Bulk Sampling in Gold Exploration”