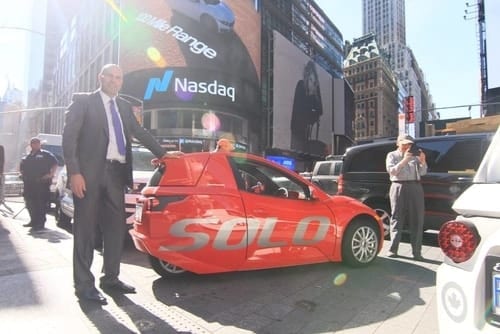 The company released its third-quarter results and hosted an EMV update where CEO Jerry Kroll shared details on deliveries for SOLO and Tofino.

Electra Meccanica (NASDAQ:SOLO) announced on Monday (November 19) its third quarter financial results, highlighting a net loss of C$2.9 million as compared to C$3 million from the same period in 2017.

The company, which is engaged in designing and manufacturing electric vehicles, reported revenues of C$190,000 for the quarter ended September 30, 2018 as compared to negligible revenues in the same quarter last year. Electra Meccanica credited the rise in revenues to its acquisition of Intermeccanica International.

Further, the company’s operating loss increased from C$2.2 million in third quarter of 2017 to C$3.9 million in the current period.

Jerry Kroll, CEO of Electra Meccanica in a release said that the company is in a much better position to deliver its first of production vehicles.

“Given our capital-light production model – which substantially reduces production and execution risk – as well as our disciplined cash management and robust balance sheet, we are now in a stronger position than ever,” Kroll said.

Monday’s release comes closely on the heels of the company hosting an EMV update on November 14 where Kroll issued further updates on SOLO and Tofino.

While the single seater SOLO is the company’s brainchild to be a major force in the electric vehicle market, Tofino is a two seater electric convertible with deliveries slated for 2020. SOLO, which is set for mass deliveries in the fourth quarter of 2018, has over 23,000 pre-orders while pre-orders for Tofino exceed 40,000.

“We have made significant progress towards our production goals in the third quarter and are on the cusp of launching mass-production SOLO vehicles in the United States,” Kroll said in the release.

In the EMV update, Kroll urged his rival manufacturers to build two seater electric convertibles as opposed to gasoline based cars.

“There’s nothing like it, there’s no two-seater electric convertible in the market,” he said. “I would love every other company to do the same thing as opposed to producing convertible gas cars. Electric cars don’t compete with us, they’re our friends. Gas cars, that’s what we are trying to fight against.”

“If you still don’t think electric cars are where the future is, have a look at the numbers, the numbers don’t lie,” he said. “That’s the value of going clean and going green.”

Kroll said that the factory production line can build the cars in three hours as compared to four to seven days in the pre-production facility.

The company said that 5,000 SOLOs are set for deliveries in 2019 with Kroll stating that the factory would initially produce 100-200 units in the first months before scaling up the production. In the long term, the company is aiming to scale up the production to 20,000 units in 2020 and 50,000 in 2021, presumably to accommodate Tofino and eRoadster.

Following the announcement on Monday, shares of Electra Meccanica were up 13.33 percent to close the trading session at US$1.53. The stock had a trading volume of 750,000 and opened at US$1.45 with an intraday high of US$1.67 and a low of US$1.35. Electra Meccanica has an “Sell” ranking on TradingView with 18 verticals against, eight neutral and two in favor.