Read our overview of the January effect to find out whether you should use this investing strategy or avoid it completely.

With the holidays behind and the new year in full swing, investors and professionals are back in the office with trading stocks back at top of mind.

In January, market watchers are often keen to talk about the January effect. Some say it’s real, but some say it’s a myth — so what is it?

The January effect is a theory based on a pattern that analysts have seen year after year. Put simply, stocks seem to fare better during January than they do during other months of the year. Generally, small-cap companies are affected most by it, as large ones are typically less volatile.

What is the January effect: Cause

The first report of the January effect came in 1942 from Sidney Wachtel, an investment banker from Washington, DC. Since then, experts have debated possible causes.

Many believe that the January effect is triggered by tax-loss selling in the month of December. Tax-loss selling, or tax-loss harvesting as it is sometimes called, is an investment strategy in which individual investors sell stocks at a loss in order to reduce capital gains earned on investments.

Since capital losses are tax deductible, they can be used to offset any capital gains to reduce an investor’s tax liability on their tax return.

As an example of tax-loss selling for tax savings, imagine if an investor bought 1,000 shares of a company for US$53 each. They could sell the shares and take a loss of US$3,000 in the event that the shares declined in value to US$50 each. The US$3,000 loss from the sale could then be used to offset gains elsewhere in the investor’s portfolio during that tax year.

It’s worth noting that tax-loss selling or tax-loss harvesting is a trading strategy that generally involves investments with huge losses, and, because of this, these sales generally focus on a relatively small number of securities within the public markets. However, if a large number of sellers were to execute a sell order in tandem, the price of the security would fall.

Central to the January effect idea is that once selling season has come to a close, shares that have become largely oversold have an opportunity to bounce back. For example, investors who have sold losing stocks before the end of the year may be driven to repurchase those stocks. (Although they would have to wait for 30 days to pass, as required by the superficial loss rule).

Regardless of whether you’re buying or selling, Steve DiGregorio, portfolio manager at Canoe Financial, recommends that you act swiftly and aggressively during this time of year as “liquidity will dry up.” He earmarks the second and third week of December as the ideal window to sell or buy at a low point.

This is well ahead of the “Santa Claus rally,” the trading days around the last week of December when stocks tend to rise ahead of a healthier market in January.

That has given rise to the alternate notion that stocks get a boost in January because many people receive holiday bonuses in December, providing them with greater investment income. Perhaps it’s one or the other — or perhaps, as with most things, a combination of drivers produces the January effect.

What is the January effect: Is it real?

While some say that the January effect was once an efficient market hypothesis — but is now fading — some mutual fund managers, portfolio managers and institutional investors say it isn’t real at all now. Goldman Sachs (NYSE:GS) notes that its analysis over the last 19 years shows that returns have diminished in the month of January compared to historical figures going back to 1974.

Those in the “not real” camp claim that while this phenomenon may have been tangible back in the 20th century, data gathered in more recent years looks much more random. The graph below, which shows the S&P 500’s (INDEXSP:.INX) performance from 1981 to 2014, is an example of this. 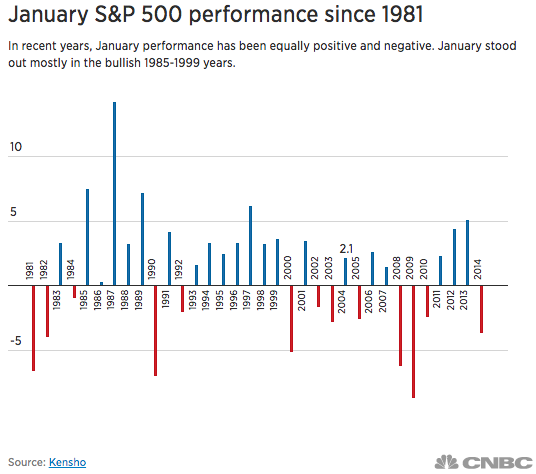 What is the January effect: 3 ways to capitalize

Those who believe in the January effect are of the opinion that investors could see a rise in their average monthly return by as much as 30 percent in the first three months of the year.

Assuming the effect is real and has not faded to the point of redundancy, what can be done to make the most of this seasonal phenomenon?

What is the January effect: Remember the risks

It can be easy to get swept up in hearsay, and with debate still in play, the January effect is a risky business. Use your judgment, or the judgment of a professional, and don’t get sucked into chasing prices.

Do you believe in the January effect? Let us know your thoughts in the comments below.

This is an updated version of an article first published by the Investing News Network in 2018.