The dramatic surge in the silver price since the start of political unrest in the Middle East could be tied to the rise in oil futures, and inflationary fears. Oil closed in New York at over $100 a barrel, and many economists, including Fed Chair Ben Bernanke warn that the rise in oil price may cause a rise in the Consumer Price Index. 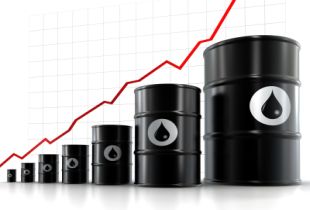 The price of silver on the COMEX continued its meteoric rise over the last week. At New York close silver’s price gained $0.71 to $34.690 per ounce. Over the last month the price has steadily risen from around $28 per ounce, with acceleration in the price seen on February 17 shortly after tensions in Libya escalated.

Driven by political unrest in the Middle East and subsequent spikes in the price of oil, investors are running to silver and gold as a safe haven bets. NYMEX oil closed today at $100.55 per barrel, and the Brent Spot Price was $116.00 per barrel. Speaking on the state of the American economy, Federal Reserve Chairman Ben Bernanke testified before the Senate Banking Committee today and spoke about inflation in relation to the oil price.

Mr. Bernanke also testified on the economic recovery, stating that the economy would continue to grow, yet unemployment would stay high in the coming years. He also noted that rising commodity prices could cause a rise in inflation.

The dollar gained against the euro today “briefly returning to positive territory, on the back of strong U.S. manufacturing data and a more positive economic outlook,” reported Erin McCarthy, for The Wall Street Journal. US manufacturing data remained positive in February expanding at the fastest pace in 7 years. Unemployment, while still at 9 percent, is decreasing.

In an effort to downplay the significance of oil price and its affect on inflation, Mr. Bernanke was confident that oil prices and weak housing markets would not deter the recovery. “They [oil prices] do not yet pose a significant risk” stated Bernanke.  While Saudi Arabia has said that they will increase oil production to meet the declining supplies out of Libya, uneasiness over political unrest and the resulting speculation of further supply constraints has driven up the price of oil.

The price of oil is a major factor in the rise of inflation with regards especially to the Consumer Price Index. Put simply, the cost of gasoline drives up the cost of everything—from food to consumer goods. Costs for food production and transport rise, and the average consumer spends a larger percentage of their income on gasoline. Touching on this fact, the Chairman tried to ease concerns by stating that the increase in consumer prices inflation would be “temporary and relatively modest.”

While the current oil prices may subside and the consumer price index may only witness a moderate increase, investors are still buying precious metals as a hedge against inflation and economic instability, as is often the case when oil prices sky rocket. Charles Kadlec, of The Christian Science Monitor, pointed out this price correlation in a recent editorial noting that around the time of the 1973 Iran Oil Crisis, “the sudden tripling in the price of oil between 1971 and 1974 roughly matched the tripling in the price of gold over the same time period.” Since the protests in Egypt that began this year, the political factors behind the rise in oil price and its potential affect on inflation are once again driving a dramatic rise in precious metals prices, including silver, as investors anticipate ongoing economic problems.

The increase in the price of oil certainly has a large impact on the US economy. And many analysts warn that sustained high oil prices could lead to another recession. “Every penny increase [in gasoline prices] is like a sales tax on the consumer,” notes David Kotok, head of Cumberland Advisors,  who notes that  for every penny increase, US consumers pay an additional $1.2 billion a year in gasoline costs.

The fear is that the economy, while showing signs of improvement, is vulnerable to any shock to the system—sustained high oil prices being a very large shock. Some economists and politicians fear that if the unrest continues to sweep over the middle east, in the worst case, infecting Saudi Arabia, that oil prices will explode and lead to an unchecked surge in commodity prices.

Investors have been markedly risk adverse since the financial collapse, putting more of their investments in precious metals as a store of wealth. “From the start of crude oil’s ascent based on Libya, you are seeing general risk issues become more of a front burner in peoples’ psyche,” said James Dailey, of TEAM Asset Strategy Fund. The political factors behind the rise in oil price and its potential affect on inflation are driving the dramatic rise in silver price since the protests in Egypt.