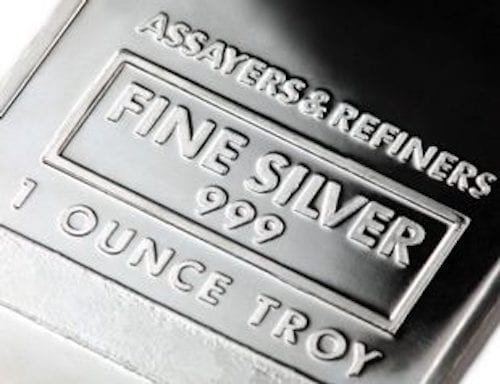 Market watchers are now paying attention to the Fed’s upcoming decision on rates as policymakers meet to discuss the outlook for the economy and monetary policy.

The silver price edged down on Tuesday (October 29) as precious metals investors awaited the US Federal Reserve’s next move on interest rates.

The white metal started the week trading at US$18.10 per ounce, dropping 1 percent to US$17.81 by Tuesday as optimism regarding a trade deal between the US and China pushed investors away from safe haven assets such as precious metals.

Market watchers are now paying attention to the Fed’s upcoming decision on rates as policymakers meet to discuss the outlook for the economy and monetary policy.

During the two day meeting, which will end with a decision on Wednesday (October 30), the central bank is widely expected to announce another 25 basis point rate cut — potentially the third one this year.

“There’s still an awful lot of discrepancy and uncertainty in the markets as to what the Fed will do next year,” said Jane Foley, senior FX strategist at Rabobank. “The market will be looking for clues as to which way that might go.”

In July, when the Fed cut rates for the first time since the 2008 financial crisis, both gold and silver slipped right after the announcement. The precious metals also suffered in September after the Fed said it was cutting interest rates again.

However, as with gold, silver prices tend to trade higher when interest rates are low, as lower rates reduce the opportunity cost of holding precious metals. Silver prices trended upwards during the third quarter, increasing from US$15.11 to US$17.62 — breaking the US$19 mark during that period.

Looking ahead, market watchers expect silver and its precious metal counterparts to trade steadily for the rest of the year, with silver edging higher due to its use in industrial applications.

“Going forward, prices are seen remaining relatively stable, propped up by a recovery in industrial production next year,” states a recent FocusEconomics report. “The evolution of the US-China trade war will be a key factor to watch in coming months, due to its potential to affect both safe haven and industrial demand.”

The firm, which is known for its economic analysis, expects silver prices to average US$17.30 in the last quarter of 2019.

In their October commodity forecast update, analysts at Raymond James increased their price forecast for precious metals, including silver, to reflect a strong set up for the metals as a result of heightened geopolitical tensions, probable future rate cuts and weak economic data in key regions.

“We caution that there may be continued volatility in both metals in response to headlines and economic data, but recommend using these occasions as buying opportunities,” they said.