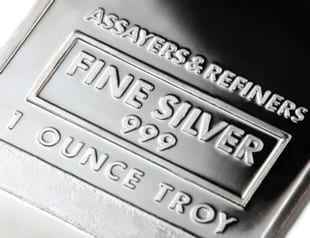 The silver price is continuing on with its impressive rise, having gained 17 percent since Britain’s decision to leave the European Union in June.

The silver price  is continuing on with its impressive rise, having gained 17 percent since Britain’s decision to leave the European Union in June. Currently, silver is sitting at $20.35 an ounce, but saw a high on July 4 when it hit $20.64 an ounce.
On top of that, the white metal has outperformed other precious metals, like gold.  Silver has risen 43.47 percent as of 1:23 p.m. EST July 11, while the yellow metal’s price is up 26.99 percent as of 1:39 p.m. EST on Monday.
Overall, silver and gold futures recently reached their two-year high, and some analysts are projecting the silver price could reach as high as $32 an ounce; prices that haven’t been seen in roughly three years.
According to the Economic Calendar, the gold/silver ratio that investors use to determine whether to buy or sell precious metals settled at 67.63 percent on July 7, which is a 9 percent decline over the last 30 days.
With that being said, some are saying silver has further to run and that the white metal may be worthwhile investing in, according to CNBC.
Not surprisingly, a number of silver stocks are reaping the benefits due to the white metal’s recent success. Here’s a look at five silver stocks up over 150 percent year-to-date with a minimum market capitalization of 10 million.

Rising sharply so far this year is Brixton Metals: year-to-date, the company’s shares have boomed 1,250 percent to $1.08.
Brixton Metals has a focus on the exploration of high grade silver and gold deposits, and has a 100 percent interest in two Canadian projects. Specifically, the Thorn Project in British Columbia is a district scale gold-silver exploration trend.
On May 25, the company announced the purchase sand sale agreement to acquire 100 percent interest in the claims near its Langis Silver mine, wherein they will issue 10,000 common shares and make a cash payment of $3,000 to acquire the property. In June, Brixton Metals then announced the had closed its previously announced $2.3 million non-brokered private placement financing, funds of which will be used to fund exploration activities at its Langis and Thorn properties.

Much like Brixton Metals, IMPACT Silver’s shares are having a strong first half of the year. Year-to-date, the company’s shares have risen 750 percent to $1.02.
Impact Silver operates two silver production centres: the Capire-Mamatla and the Zacualpan, both in Mexico. On June 17, the company announced the closing of the fourth and final tranche of the private placement. The fourth tranche raised $248,7655 by issuing 436,430 unites at a price of $0.57 per unit.

Founded in 1968, Avino Silver & Gold Mines currently has properties in Mexico and British Columbia, and has another in trial production. The company maintains a pipeline of gold, silver and base metals explorations properties.
On June 6, the company announced they had declared commercial production at its second mine on the Avino Property in Mexico, following an advancement and test period of 19 months.
Year-to-date, Avino Silver’s shares have increased 208.87 percent overall to $3.79.

Great Panther Silver is also having a successful year: year-to-date, the company’s shares have boosted 184.29 percent to sit at an even $2.00 overall.
The company’s current activities are focused on the mining of precious metals in its two wholly-owned operations: the Guanajuato Mine Complex and the Topia Mine in Durango.
Throughout 2016, Great Panther Silver will be drilling at Guanajuato with a focus on increasing the resource base at its main Guanajuato mine and at San Ignacio. On July 6, Great Panther Silver announced the increase of a previously announced bought deal financing to $26 million.
Don’t forget to follow us @INN_Resource for real-time news updates!


Give me my free report!
Securities Disclosure: I, Jocelyn Aspa, hold no direct investment interest in any company mentioned in this article.
Editorial Disclosure: Brixton Metals is a client of the Investing News Network. This article is not paid for content.