Thomson Reuters GFMS’ Platinum & Palladium Survey 2015 came out Thursday. In it, the firm takes a look at 2014 supply and demand trends and provides its 2015 price outlook for the metals. 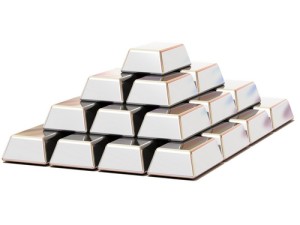 Thomson Reuters GFMS’ Platinum & Palladium Survey 2015 came out Thursday. In it, the firm takes a look at 2014 supply and demand trends and provides its 2015 price outlook for the metals.

GFMS starts by explaining how in the second quarter of 2014, eight years of oversupply transformed into deep deficits for both platinum and palladium. The change was driven partially by mining strikes in South Africa, which further restricted output in an already supply-constrained market. The firm calls the strikes — which were the longest wage strikes in South Africa’s history — “by far the most damaging supply-side event for year.” 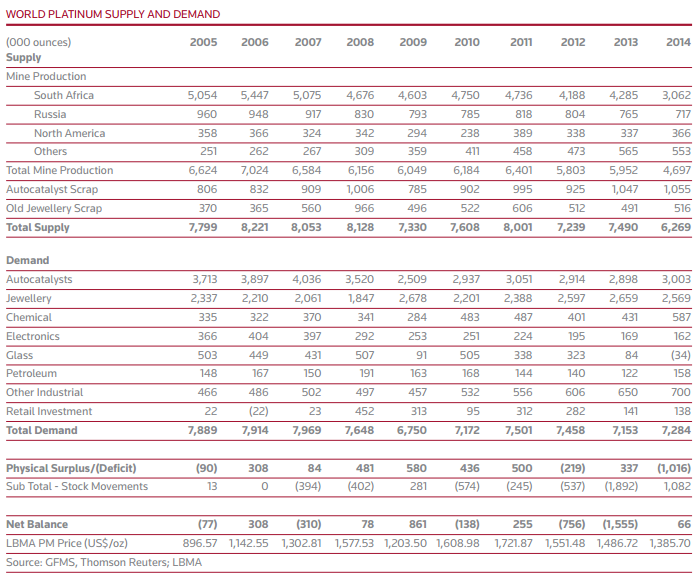 In 2015, GFMS sees global supply of both metals rising as South Africa’s output returns to a “level of neutral buoyancy.” That, coupled with a moderate rise in recycling, is expected to increase total platinum and palladium supply by 13 and 5 percent year-on-year, respectively. The firm also expects demand to grow for both metals.

Here’s a look at some highlights from the survey, including what happened with platinum and palladium supply and demand in 2014 and what GFMS expects to see in the future.

The platinum price averaged $1,388 per ounce in 2014, the lowest annual average in seven years. That said, the metal’s price was boosted somewhat by South African supply risks, which helped push it up by 11 percent from the beginning of the year to July 10; at that time, it peaked at $1,512, the its highest level since September 3, 2013.

Palladium mine production fell by 7 percent in 2014, reaching a 12-year low of 6.04 million ounces, and putting the market into its deepest deficit in more than a decade. Again, driving that price action were strike-related losses in South Africa. Russian output helped offset that slightly, as it grew by 3 percent due to the release of in-process palladium inventory. Production in Zimbabwe also saw growth of 3 percent last year.

On the demand side, global desire for jewelry fell for the sixth consecutive year, reaching 470,000 ounces. That’s a 9-percent drop and the lowest amount since 2004.

In 2014, the palladium price averaged $803 per ounce, 10.7 percent higher than the previous year’s average. That was due to the large physical deficits that characterized the market in 2012 and 2013, and only deepened further in 2014 to 2.17 million ounces.

The platinum price is expected to average $1,170 in 2015. That’s 16 percent lower than last year’s average, though the price trajectory from current levels is upwards, towards $1,290. Still upward potential will be limited, and GFMS states that it “would not be surprised if platinum tested $1,000 this year.”

In contrast, the firm’s outlook for palladium is bullish as stricter emission standards and rising autocatalyst demand from both Europe and China will likely keep the market in a deficit. The firm expects a break level of $805, with a price beyond that number being “governed by the upward trending channel that dictated much of the activity witnessed over the last three years.” GFMS expects palladium to reach $940 by the end of this year.