The gold standard is often mentioned, but rarely explained. Here’s a brief overview of its history and possible future. 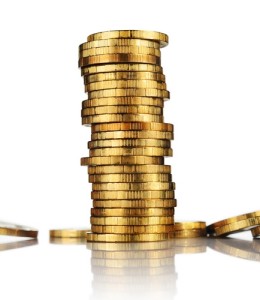 This article was originally published on Gold Investing News on March 5, 2014.
The gold standard is often mentioned, but rarely explained. However, it’s a fairly easy concept to understand.
Put simply, it is a monetary system under which the economic unit of account is based on a fixed quantity of gold. That means paper currency notes are convertible directly into specific quantities of gold.
Looking a little deeper, there are three types of gold standard. Those are:

A brief history of the gold standard

The gold specie standard was the first gold standard system. It arose naturally due to the fact that millenia ago, several different economies in Asia started accepting gold as currency.
Since then, different gold currencies have enjoyed something of a monopoly. For example, the Middle Ages saw the Byzantine solidus, known as the bezant, used throughout Europe. Similarly, in 1704, the British West Indies began using a gold specie standard based on the Spanish dubloon, while in 1821, after the Royal Mint introduced gold sovereigns, Britain used a gold standard.
Canada adopted a gold standard in 1853, and the United States and Germany followed in 1873, the Congressional Research Service states.
Finally, however, the gold standard’s popularity began to wane. The gold specie standard ended in the British Empire after World War I broke out, and by 1976, the international monetary system was based purely on fiat money. That means that while gold retains its value as a commodity, no currencies are tied directly to its value.

That said, efforts to bring back the gold standard are occurring in a variety of places.
Writing for The Wall Street Journal, James Grant posits that pure fiat money may not be the best system available. He notes, “the pure paper dollar is a contrivance only 38 years old, brand new, really, and … the experiment may yet come to naught. Indeed, history and mathematics agree that it will certainly come to naught. Paper currencies are wasting assets. In time, they lose all their value.”
Grant also contends that the end of the gold standard in the US inadvertently led to more risks being taken on Wall Street, increased borrowing and serious inflation.
Politically, some form of the gold standard has a strong appeal to niche groups. In the US, that mostly means libertarians and others who believe in minimal government intervention in monetary policy. However, the idea gained more widespread approval when in May 2011 Utah adopted a policy that saw gold and silver coins minted by the US government made legal tender in the state.
While, as National Interest points out, implementing such a policy is a bit difficult — the idea of buying a cup of coffee with a $50 American Eagle coin worth more than $1,000 at market price is a mathematical headache — it indicates how popular the gold standard is to some. Other states have proposed that taxes be paid in gold and silver or that state debt be paid using metals.
Most recently, Canadian financier Ned Goodman said at this year’s PDAC conference, “the fact is, if we can return to a classical gold standard and get rid of the Federal Reserve being where we are, we will have a good time in the commodity markets.