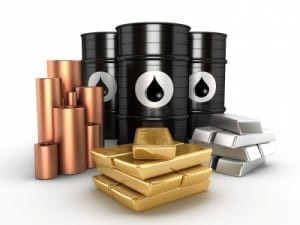 Gold and Silver edged down on Friday. Copper traded above the $7,000 per-tonne-mark.

The gold price edged down on Friday (November 24), with investors taking profits at the end of the trading week. Despite this, analysts remain bullish on the yellow metal, expecting a rebound before the year ends.
“I think gold will move back towards $1,300 next week or the week after, maybe on the back of dollar weakness,” said Georgette Boele, commodity strategist at ABN AMRO in Amsterdam.
“There are still some longs in the market, so there’s more technical momentum as they try to push prices up again to see what happens in the last weeks of the year.”


Give me my free report!
Similarly, Ole Hansen, head of commodity strategy at Saxo Bank, said that he still sees a chance of gold reaching their end-year target of $1,325 per ounce.
“The outlook for inflation is still low, long yields will remain subdued and then we have geopolitical risks rising this year. That’s enough to prompt investors to buy gold, even though the growth outlook is still strong across the world.”
On Wednesday (November 22), the US Federal Reserve published its latest meeting minutes, which the market regarded as dovish. Investors have already priced in one more rate hike in December, but expectations of a rate hike in March decreased after the minutes were released.
The Fed’s cautious view of inflation could lead to a longer period of low interest rates which provides a solid platform for gold investment, said Cameron Alexander, analyst at GFMS Thomson Reuters.
In fact, gold tends to fare better when interest rates are low and often struggles when interest rates increase. That’s because higher rates curb the investment appeal of non-interest-bearing assets. As of 1:00 p.m. EST on Friday, the gold price was $1,288.10 per ounce.
Looking over to other precious metals, silver was trading neutral on Friday and was on track for a weekly decline for the first time in three weeks. As of 1:00 p.m. EST on Friday, the white metal was $17.03 per ounce.
Palladium was down 0.9 percent for the week trading at $1002.05 per ounce while platinum rose 1 percent trading at $942.30 per ounce.
On the base metals side, LME copper closed up 0.6 percent at $7,004.50 per tonne, after touching $7,009.50, its highest since the beginning of the month. Prices were supported by a 24 hour-strike at Chile’s Escondida, the world’s largest copper mine.
Lastly, spot oil edged higher on Friday, hovering at more than two year highs, as investors turned their attention to a key OPEC meeting next week.
December West Texas Intermediate crude rose 0.9 percent to $58.82 a barrel on the New York Mercantile Exchange, while Brent crude for January on London’s ICE Futures exchange was up 0.14 percent at $63.68 a barrel.
Don’t forget to follow us @INN_Resource for real-time news updates!
Securities Disclosure: I, Priscila Barrera, hold no direct investment interest in any company mentioned in this article.