Rising global demand for gold may lead to a growth in Guyana’s industry, though environmental concerns and a lack of infrastructure are slowing the process. 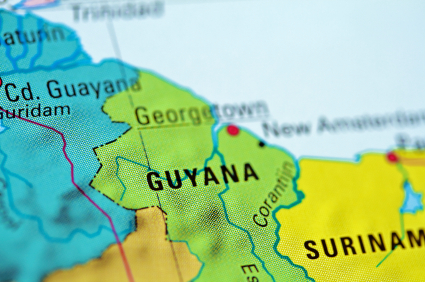 Guyana is a country only beginning to develop its gold resources, where a supportive government and rising global demand may lead to a growth in the industry. However, environmental concerns and a lack of infrastructure are slowing the process.

“The exploration and development process is still at an early stage and investor awareness is just beginning to pick up about the potential of the country,” said Lawrence Roulston, geologist and editor of the newsletter Resource Opportunities. “For a long time it had a political situation that wasn’t favourable for mining and that situation has now turned around totally so that the government is actually very supporting of international mining companies.”

In recent years, the Guyanese government has shown initiatives to increase the revenue from gold mining and attract foreign investment, as well as better regulate an unruly industry. The last underground mine in Guyana was Canadian-owned Cambior’s Omai mine, which was closed in 2005 after the collapse of a toxic tailings dam, but once again international companies have been exploring the country for viable operations.

There are still many challenges to advancing the mining sector in Guyana, a major one being an almost complete lack of infrastructure in the country’s interior, though because of its high value, gold is one mineral that has an advantage when it comes to transportation.

“It is difficult to get around in the country. There aren’t a lot of roads in the interior so everything is either airplane or helicopter or boats on the river,” said Roulston. “From a base metal mining prospective it’s very difficult where you need a rail line to carry concentrate. But for gold mining, you can take the gold out on barges or on airplanes.”

Environmental degradation has been rampant in the Guyanese gold mining sector, which currently consists of thousands of poorly-regulated small surface-level operations. This extraction has led to deforestation and the depositing of mercury in the recovery process, causing harm to both local communities as well as the non-human environment. As discussed in the 2007 report, All That Glitters: Gold Mining in Guyana, by the International Human Rights Program of Harvard Law School, it’s the sparsely populated Amerindian communities that are most affected.

“They’re either involved in these small mining operations or they’re suffering the negative impact,” said Roulston.

It’s only with today’s government that the country has become favourable to foreign mining investors, with several exploration companies looking to develop underground extraction operations which Roulston says stand to better serve both the local human population and the environment where they live.

“The government is trying hard to stop that environmental mess of the small miners and instead have the international companies come in and conduct real mining operations where they go down hundreds of meters but create a much smaller footprint,” said Roulston. “The idea of establishing mining operations that bring stability and long-term employment opportunities would be a huge benefit to the country and that’s part of the government’s push: to create the stable long-term employment that would lead to healthcare and education and some of the other benefits to the remote areas.”

The growing global demand is attracting a number of foreign gold exploration companies to Guyana. Guyana Frontier Mining (TSX: GYG) began acquiring interests in the country in 2007, and has begun reporting drilling results for their projects. GMV Minerals Inc. (TSXV:GMV) is another company which picked up a very large property position from the largest surface miner in Guyana and is now in its early stage but a very extensive property position with numerous surface mining projects under way.