Nevada is home to the Carlin Trend, North America’s most prolific gold-producing area and the second-largest known gold resource in the world.

This article was originally published on Gold Investing News on October 7, 2010. 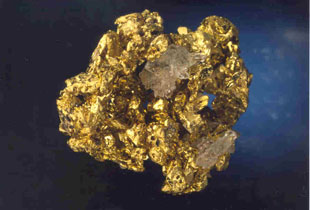 Nevada is home to the Carlin Trend, North America’s most prolific gold-producing area and the second-largest known gold resources in the world, after the Witwatersrand in South Africa. The Carlin Gold trend is a belt of gold deposits, primarily in Paleozoic limy sediments, that are about 50 miles wide and 40 miles long.
“Carlin” actually refers to a style of mineralization that is seen around the world. Carlin-style deposits contain disseminated gold mineralization, usually structurally controlled. Mineralization may be predominantly oxides, sulphides, refractory or carbonaceous sulphides. This type of gold deposit is very low grade, and while the grade may fail to impress these deposits make up for it with shear volume.
The Carlin trend is the more “famous” cousin of the Cortez trend; the Carlin is the “younger” (in the sense of discovery, not necessarily age) counterpart in the region called the Cortez trend. Consulting geophysicist Hans Rasmussen, who once worked with Newmont on the Carlin Trend, believes there is a strong possibility that the Cortez Structural corridor system may be both older and bigger than the Carlin fault system. Being older is good: that allows more time for more geological events to occur. The reasoning is long and technical, but the bottom line is that if Rasmussen is right, the Cortez Trend could prove to be not only as big as Carlin, but bigger.
The Cortez is found on the southern portion of the Battle Mountain-Eureka Trend in north central Nevada. The Cortez Trend is in the same area of Nevada and is similar in size to the Carlin Trend, but is displaced about 50 miles southwest. It includes the Pipeline Mine Complex (12 million ounces) to the north and the Gold Bar Mine (1 million ounces) to the south. The main area of focus of the Cortez trend has been the southern section, which has sedimentary rocks capable of hosting Carlin-style Gold deposits created roughly 38 million years ago. This is in contrast to areas north of Battle Mountain where gold tends to be hosted in volcanic rocks.
Delineating the geology of the Cortez Trend can get complicated because it, like the Carlin Trend, also involves a complicated faulting system. Intersecting fault systems, from different geological periods, have made it challenging for geologists to separate the different systems. The Eureka-Battle Mountain region of Nevada has two layers of sedimentary rock: the “Upper Plate” and “Lower Plate”. The Upper Plate does not typically host higher-grade gold mineralization, but can contain indications of higher grades in Lower Plate rocks that have “leaked” upwards. Lower Plate mineralization correlates with the major gold deposits of the Carlin Trend, where a great deal of surface erosion and other geological activity has brought Lower Plate blocks within range of open pit mining in some places. Cortez Trend deposits are replacements or disseminations in calcareous sediments and limestone strata, also in Lower Plate rock.
Considering the potential of the Carlin deposit, it is apparent that exploration has been ongoing in the region for years. So how is it that these exploration companies missed such a promising gold field? The answer lies in the geology of the region. The same crustal stresses that lead to the formation of the Cortez, also buried the deposits. As on the Carlin Trend, one of the keys to discovery is finding Lower Plate rocks that have been exposed in or through “windows” where the Upper Plate has been eroded. Now, although, that the potential is fully understood there are quite a few exploration companies looking for the next big gold discovery in the region. Here is a sample of a few of the players:

US Gold completed its acquisition of three junior exploration companies adjacent to its property in Nevada’s Cortez Trend on March 23, 2007. Within the Cortez Trend US Gold controls two projects known as Tonkin & Gold Bar. The properties cover 170 square miles and are situated directly south of Barrick Gold’s Cortez mine area. The Gold Bar Project’s deposits were mined in the late 1980’s and early 1990’s by Atlas Gold Corporation. The Gold Pick deposit produced approximately 97,000 ounces of gold from approximately 1.4 million tonnes of ore mined. US Gold now controls all of the Gold Pick, Gold Ridge, Cabin Creek and Hunter resources.

Coral Gold has a portfolio of properties along the Cortez Trend, both wholly owned and joint venture. The Company’s keystone property is the Robertson Project, which adjoins Barrick Gold Mines’ Pipeline Mine, one of the lowest cost gold producers in Nevada, that has reported proven and probable reserves of 13.4 million ounces of gold. Coral Gold owns 100 percent interest in the Robertson Core claims. Robertson is an advanced-staged exploration project. It is located along the Battle Mountain/Cortez Gold trend in north-central Nevada and immediately adjacent to the Pipeline gold mine. Five mineralized zones have been identified on the property: Porphyry, 39A, Gold Pan, Altenburg Hill and Distal. The Robertson property has over 3.4 million ounces of inferred mineral resource, and deep drilling at Coral gold discovered indications of Carlin-type gold mineralization in lower plate rocks north of the Pipeline property.

Miranda Gold Corp. is focused on exploration in the Cortex Trend; the company also has interests in Alaska and Colombia. Miranda holds four properties on the Cortez trend: coal canyon, red canyon, red hill, and taz.

Barrick Gold’s Cortez gold mine is located 100 kilometers southwest of Elko, Nevada in Lander County, adjacent the existing Cortez Pipeline Mine. The Cortez Pipeline property is 11 kilometers northwest and the Cortez Pediment property (which includes the Cortez Hills deposit) is 4 kilometers southeast of the original Cortez milling complex. The Pipeline and South Pipeline deposits are mined by conventional open-pit methods.
With help from Assistant Editor Vivien Diniz