Mark Selby, President and CEO of RNC, commented, “Clearly, the highlight of the third quarter was the significant high grade gold discovery at the Beta Hunt Mine. As a result of the Father’s Day Vein discovery, the company will be in a substantial net cash position to fully fund our upcoming activities. With the arrival of the first drill at site during the past week, exploration activities will begin to ramp up as part of an aggressive exploration campaign. The technical team is continuing to advance their work on understanding the sediment structures in the mine which have the potential for additional high grade coarse gold.”

Mr. Selby continued “We are also pleased to announce the final gold content estimates for the large specimen stones, which would rank them among the largest ever found. The “King Henry” specimen stone, at 1,402 ounces, would rank amongst the largest gold specimens in existence. With multiple large scale and spectacular specimens coming from a single area, we believe the Father’s Day Vein may rank among the richest and most prolific gold veins ever found.” 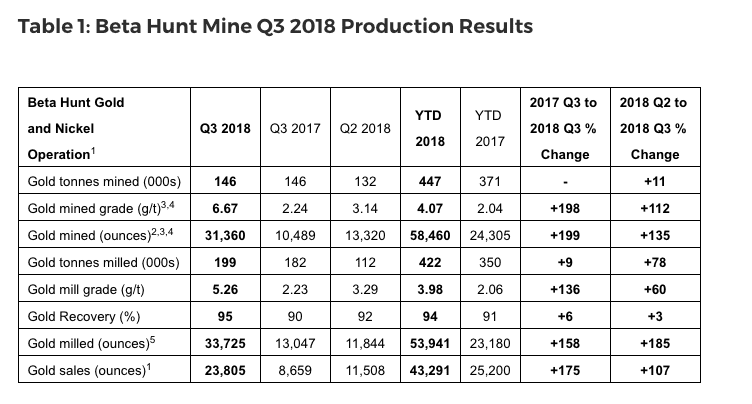 Additional firings were completed at the Father’s Day Vein over the past weekend, resulting in the recovery of the “Golden Rose” slab (see Figure 1). On-site personnel were not able to weigh the slab as its weight exceeded the maximum weight of the site scales. A weight and estimate of gold content will be provided by a third party laboratory.

RNC now expects 27-30,000 ounces of gold from the immediate Father’s Day Vein area and substantially more than 35,000 ounces from the 540 metres of A Zone sediment structures identified to date.

With the expectation that ongoing high-grade coarse gold will be produced by the mine on a regular basis, the Beta Hunt Mine has taken measures to improve the ability to estimate coarse gold and realize cash flow more efficiently.

The disclosure of scientific and technical information contained in this news release has been approved by Kevin Small, Chief Operating Officer, Salt Lake Mining and Vice President, Project Development of RNC.

About RNC Minerals
RNC has a 100% interest in the producing Beta Hunt gold mine located in Western Australia where a significant high grade gold discovery – “Father’s Day Vein” – was recently made. RNC also has a 28% interest in a nickel joint venture that owns the Dumont Nickel-Cobalt Project located in the Abitibi region of Quebec which contains the second largest nickel reserve and eighth largest cobalt reserve in the world. RNC owns a 35% interest in Orford Mining Corporation, a mineral explorer focused on highly prospective and underexplored areas of Northern Quebec and the U.S. Carolina Gold Belt. RNC has a strong management team and Board with over 100 years of mining experience at Inco and Falconbridge. RNC’s common shares trade on the TSX under the symbol RNX. RNC shares also trade on the OTCQX market under the symbol RNKLF.

This news release contains “forward-looking information” including without limitation statements relating to the liquidity and capital resources of RNC, production guidance and the potential of the Beta Hunt Mine.

Forward-looking statements involve known and unknown risks, uncertainties and other factors which may cause the actual results, performance or achievements of RNC to be materially different from any future results, performance or achievements expressed or implied by the forward-looking statements. Factors that could affect the outcome include, among others: future prices and the supply of metals; the results of drilling; inability to raise the money necessary to incur the expenditures required to retain and advance the properties; environmental liabilities (known and unknown); general business, economic, competitive, political and social uncertainties; accidents, labour disputes and other risks of the mining industry; political instability, terrorism, insurrection or war; or delays in obtaining governmental approvals, projected cash costs, failure to obtain regulatory or shareholder approvals. For a more detailed discussion of such risks and other factors that could cause actual results to differ materially from those expressed or implied by such forward-looking statements, refer to RNC’s filings with Canadian securities regulators available on SEDAR at www.sedar.com.

What is Graphene?
5 Top Weekly TSXV Stocks: Macarthur Up 67 Percent on Iron Ore Assays
5 ASX Investment Ideas in a COVID-19 World
Gold and COVID-19: Who’s Reacting and How?