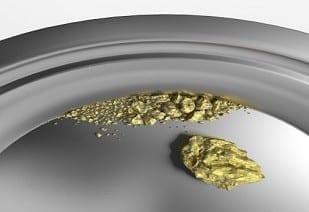 Lode gold is the most significant source of gold in the world; however, with the price of gold skyrocketing, other deposits have become an attractive exploration target. Placer gold mining, once a hobbyist undertaking, can be a profitable business for both individual prospectors and mining companies.

This article was first published on Gold Investing News on May 2, 2011
By Leia Michele Toovey- Exclusive to Gold Investing News
Lode gold is the most significant source of gold in the world; however, with the price of gold skyrocketing, other deposits have become an attractive exploration target. According to a report published by the Alaska Geological Survey in the 1990’s the extraction of placer gold deposits became an economically feasible means to mine for gold as long as the metal price’s was above $245 per ounce. While inflation and mining costs have increased over the past decade, the value of gold has risen to an all-time high. Placer gold mining, once a hobbyist undertaking, can be a profitable business for both  individual prospectors and mining companies.
Placer gold deposits consist of gold that has been eroded, transported and deposited to a location different from where the metal was originally found.  The original “Gold Rush” prospectors mined for placer gold using gold pans and sluice boxes to search for gold along stream beds. Exploiting placer gold deposits has become seen technological advancements as companies have developed more sophisticated techniques of exploring river beds and drainage valleys. From large dredging systems to unmanned submarine vehicles that can explore the ocean floor, valuable placer deposits are now easier to pinpoint and unearth.
Today, the likelihood of finding a huge nugget in a stream is not as high as it once was; however, there are plenty of opportunities to find gold in other, larger types of placer deposits.
The most common type of placer gold deposits are alluvial. Alluvial deposits refer to any type of deposit that has been formed by water. A subset of alluvial deposits are fluvial deposits, which refer strictly to deposits formed by a river. Fluvial placer gold is often found in bench or terrace deposits. These types of deposits are formed through flood plains created overtime due to the receding of the river’s water levels. Rivers always are “chasing” sea level, and sea level is dynamic. When sea level drops, a river will erode down to its bed as it “chases” the new sea level. If it erodes far enough, and then stabilizes it will leave its old flood plain at a higher elevation, and will start to form a new flood plain at its new level. This process can happen many times, leaving behind what looks like “benches.” These benches can contain gold deposits from gold eroded sometime during the river’s run and deposited on the ancient flood plain. Beyond terraces, alluvial placer gold deposits can also be found in current floodplains and even stream/river beds. Depending on how old the deposit is, and the local geography, alluvial gold can be found mixed with loose sediments, or cemented.
Marine sediment gold deposits could be classified in the alluvial/fluvial category; however, they deserve a specific mention. Gold that is transported by rivers that is not deposited on either the flood plain or stream-bed is often deposited where the river meets the ocean. When a river meets an ocean, it deposits all the material collected, and carried through their journey across the continent. In addition, gold and other minerals that are found in the ocean could have, in the past, been deposited in a terrestrial environment. If sea level rises, it can bury what was once a terrestrial area. These submerged beaches can contain large amounts of gold, and other minerals.
Residual gold deposits are shallow mineral deposits forming directly from weathering and chemical disintegration of a gold-bearing quality vein near the surface. Residual deposits tend to be rich, but localized in occurrence. Eluvial gold deposits are not formed through hydraulic processes; instead, they owe their origin to gravity and wind. Eluvial deposits are commonly found in between the lode erosion and drainage system. Residual gold tends to form accumulations in soil or colluvium by “creeping” along with material down a hill-slope. For an example of a common eluvial deposit, when you see a typical cone shaped slope of unconsolidated sediments at the foot of a mountain, you are commonly looking at an “eluvial fan.”
Placer gold miners and explorers
Brookemont Capital (TSXV:BKT)
Ginguro Exploration Inc. (TSXV:GEG)
Rangold Resources Ltd.  (NASDAQ:GOLD)
Denarii Resources Inc. (OTC:DNRR)