NioGold Mining: Gaining Attention from a New Class of Investors 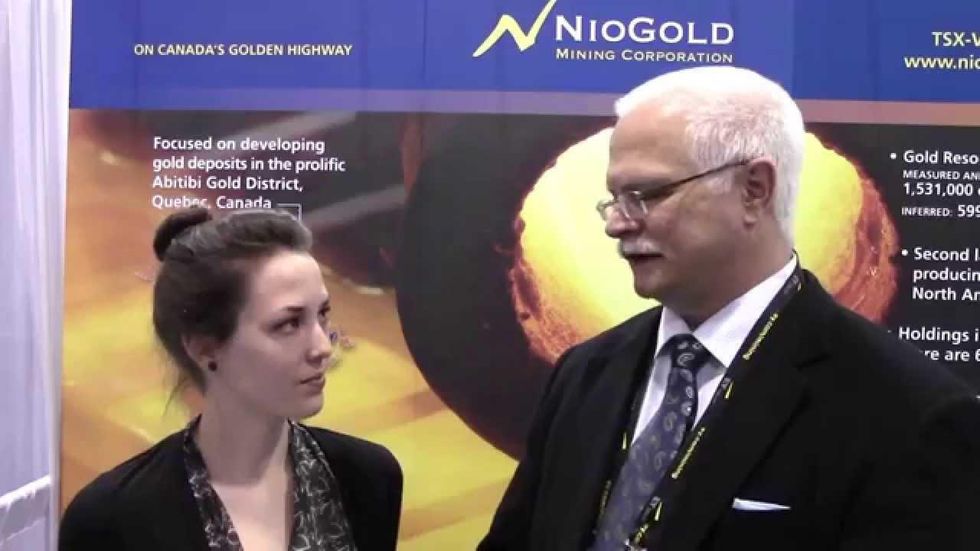 Dale Paruk of NioGold discusses some highlights from 2015 drill results from the Marban deposit, located at the company’s Marban Block property. He also touches on the company’s cost-cutting efforts and explains the company’s impressive share price rise this year.

In the video below, Paruk discusses some highlights from 2015 drill results from the Marban deposit, located at the company’s Marban Block property. “The important part of it is that this is very tight spacing, only 25-meter drill holes, and that will allow us to increase the reliability of the results in the pit, and hopefully increase from resources into reserves,” he explains.

He also touches on the company’s cost-cutting efforts and explains the goal of 2015 drilling at Marban. In closing, Paruk gives some insight into how NioGold has managed to enjoy such a significant share price rise in 2015 — at the time of the interview it was up about 58 percent since the beginning of the year. “Last summer we did a private placement with Osisko Gold Royalties (TSX:OR), and they’re very well respected in the mining area. And also three new directors have joined the company from Osisko,” he said, adding, “it’s bringing in a different class of investors.”

RIN: I’m Charlotte McLeod with Resource Investing News and here with me today at PDAC is Dale Paruk, who does investor relations at NioGold Mining. Thank you for joining me.

DP: Thanks. Appreciate it.

RIN: Okay. So, to start off, NioGold has released some great results from the Marban deposit in 2015. What would you highlight for investors and what do they tell you about the deposit?

DP: We’ve put out a couple of assay releases in the last couple of months, and most of them were very good. This all infill drilling that we’re doing on our Marban pit. And so, we’re expecting pretty decent results, but the important part of it is that this is very tight spacing, only 25-meter drill hole and that will allow us to increase the reliability of the results in the pit and hopefully increase from resources into our reserves, so that we can look at the production decision.

DP: So far, the results have been very good. We’ve had quite a bit of gold in areas that before were classified as having no resource. So it should increase our total results.

RIN: Okay. So, recently, the company announced an expansion to the drill program at Marban due to significant cost savings. So what have you been saving to cut costs?

DP: Well, basically, we’ve been dealing with a firm hand with the drillers and the operators. There’s a lot of mining that has had a downturn the last couple of years, so a lot of the drillers are quite hungry for contracts so, by giving them a long-term contract, we were able to negotiate some very good rates and we’ve lowered our costs significantly because of that.

RIN: Okay. Great. And can you expand a little on the objectives of the current program at Marban?

DP: Sure. We have three different deposits on the Marban block but the key one is the Marban deposit itself and that’s where we focused most of our drilling for the last five years. What we’re doing now is taking it from a measured and indicated, with a lot of inferred resources, into what will eventually become reserves. And that will allow us to either sell the ore as to someone that’s close by. There’s a mine that’s not too far away run by Agnico Eagle (TSX:AEM,NYSE:AEM) and Yamana (TSX:YRI,NYSE:AUY). Or we could do a toll contract where we actually we’ll contract them to run the mill and we get the production results. And we’re also looking into doing a potential heap leach, so, we’re going to have basically three options to work with the property, but by upgrading the resources to reserves, it gives us something that is widely accepted as ready for production.

RIN: Oh, good. So, last I checked, NioGold was up about 58 percent since the beginning of the year. I am thinking obviously the drill results have had something to do with that, but are there any other things that have contributed to that rise, do you think?

DP: Yes, last summer, we did a private placement with Osisko Gold Royalties (TSX:OR), and they’re very well-respected in the mining area, and also three new directors have joined the company from Osisko. So we have some very well-regarded international mining people on the board of directors. The new president Robert Wares is very well-regarded. And so, it’s bringing in a different class of investors from larger pension funds and institutions that normally wouldn’t have looked at NioGold and now realize that we have a solid asset.

RIN: Okay. And finally, what more can investors expect from the company in the future?

DP: Well, we are in the middle of a 50,000-meter drill program, so, there’s three drills on the site so there will be assays coming on a regular basis. We’re doing a metallurgic test, bottle-roll testing, and also column leaching. So, we’re looking at getting news out probably over the summer and the fall. So, there’ll be a lot of assays and then results from those tests and hopefully in the New Year, we’ll be looking at a reserve.