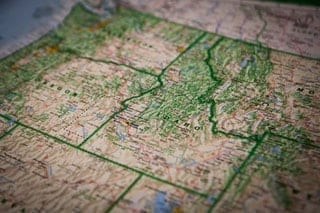 Consolidation of patented and unpatented mining claims is the key to unlocking shareholder value in a mineral land package.

While much is made of a big discovery in mining, having the right geology, drill results and management team mean less to a potential acquirer if the exploration company hasn’t properly claimed and consolidated the properties. Understanding the distinction between patented and unpatented mining claims in the United States is essential knowledge for mining stock investors.
In the United States, the importance of staking claims goes back to the California and Nevada gold rushes of the 1800s and the Mining Act of 1872. While there have been a lot of changes in how mining claims are staked since then, the central principle holds: the owner of a mining or oil and gas claim in the United States owns the minerals or hydrocarbons below the surface.
In many other countries surface rights can be bought and sold, but the minerals underground belong to the state. For instance, in Canada some mineral rights are privately held, but the vast majority are owned by the government. That can make a big difference for an exploration company because if the mineral rights are privately owned, the company does not have to go through the same rigorous and time-consuming permitting process as when the mineral prospect is controlled by the government.

The difference between patented and unpatented mining claims

In the United States, the critical distinction is between patented and unpatented mining claims. A patented claim is a historical claim to a mineral deposit that may have been staked as far back as the 1800s, as many are in states like Nevada and California. The biggest advantage to a patented claim owner is he owns the land and minerals underneath it. That means an owner can lock off his land and deny anyone access. If a mining company wants to develop a mine, but his claim is within the land package under development, he can say no to a sale or hold out for his price.
Patented claims tend to have more historical data on resources or drill results because the owner would have needed to complete a mineral survey in order to have his claim patented by the government. A patented claim owner will therefore have a general idea of what was mined and the size of the mine; however, the amount of information available on the claim depends on when it was patented.
In the 1920s and 1930s it was possible to obtain a patented mining claim without any proof of mineralization, but that changed from the 1960s forward when the federal government required a feasibility study on the property in order to patent the claim — with the land title actually signed by the president.
In the 1990s, the government under President Bill Clinton put a moratorium on patented claims so that now any new mining claims are unpatented. An unpatented mining claim is a claim on Bureau of Land Management (BLM) or Forest Service lands, which means the claim owner only has a right to the minerals, not the surface land itself, which is still subject to all the permitting rules required by those government agencies, including environmental baseline studies.
If a piece of land in the United States is not the subject of a patented claim and it doesn’t fall within parkland, a military base or other restricted government use, it is generally available for staking. The public can find out which land is open for staking through the BLM website, which controls the staking process in all states except for Alaska. Most claim staking has been and continues to be done west of the Mississippi River.

To further complicate matters, there is fee ground, which refers to land given to railroad companies in the 1800s on either side of the railway tracks. Like patented mining claims, fee ground doesn’t require exploration companies to adhere to BLM or Forest Service permitting rules because the land and the mineral rights underneath were transferred to the railway companies. Since the 1800s, some fee ground has been sold to mining companies — for example, Newmont Mining (NYSE:NEM), which controls a large allotment of fee ground in Nevada.

Investors in exploration companies should realize that a major mining company considering the buyout of a junior is much less likely to be interested if the land package is an unconsolidated mix of patented and unpatented mining claims. That also means that some of the more interesting projects today have been underexplored due to fragmented claim status and a lack of historical data.
“Consolidation is the key to unlocking shareholder value in a mineral land package,” notes Jerry Baughman, president of Nevada Select Royalty, a wholly owned subsidiary of Ely Gold & Minerals (TSXV:ELY). Jerry is a veteran geologist with over 30 years’ experience working in the United States, Mexico and South America. Nevada Select maintains one of the largest mineral databases on Nevada properties and specializes in consolidating claims and data of underexplored projects.
“If there’s little isolated parcels of third-party claims, you want to tie those up; especially before you get too far down the road. If you think you’ve got a discovery you plan to develop, the longer you take to acquire the claims, the more it’s going to cost you,” explains Baughman, referring to third-party claim owners bidding up the cost of the claims as successful nearby exploration makes them more valuable. Likewise, if the third party is a major gold producer, the cost of consolidation automatically increases.
Depending on where the claims are, differing ownership can become troublesome for exploration companies wanting to develop consolidated land packages; especially when the goal is to sell the complete package to a major mining company following value-added exploration on the properties.
“[Majors] seem to lose interest fairly quickly because if the ground is not consolidated, then they’re limited on where they can explore. The bigger companies especially don’t like to spend a lot of time and money negotiating deals with people and consolidating it themselves. And the consolidation of the historic data is also a key to increasing the value of a project,” adds Baughman.
The bottom line for investors? When doing your due diligence on a project based in the United States, check to see whether the claims on the property are sewn up into one consolidated land package, or whether there are patented or unpatented claims owned by a third party. These unconsolidated mining claims could make the difference in whether or not the property will have any exploration upside (if the company doesn’t own the claims, they can’t explore them); or, equally important, become an acquisition target for a major mining company.
This article was written according to INN editorial standards to educate investors, and was originally published in July 2017.