Golden Predator reports significant gold mineralization in 9 of the 10 initial drill holes from its Fall 2019 exploration program at Brewery Creek.

Golden Predator Mining Corp. (TSXV:GPY, OTCQX:NTGSF) (the “Company” or “Golden Predator”) reports significant gold mineralization in 9 of the 10 initial drill holes from its Fall 2019 exploration program at its 100% owned fully licensed Brewery Creek Mine project located 45 minutes from Dawson City, Yukon. Several of these holes, which were generally shallow and proximal to the existing pits, encountered higher than anticipated gold grades. The Company has focused intensely on preparing the former gold producer for redevelopment work to commence in 2020 and has undertaken an aggressive exploration program designed to expand and upgrade current resources. To date, 138 exploration drill holes have been completed for a total of 15,223 m (59,995 ft).

Highlights of the drill program include: 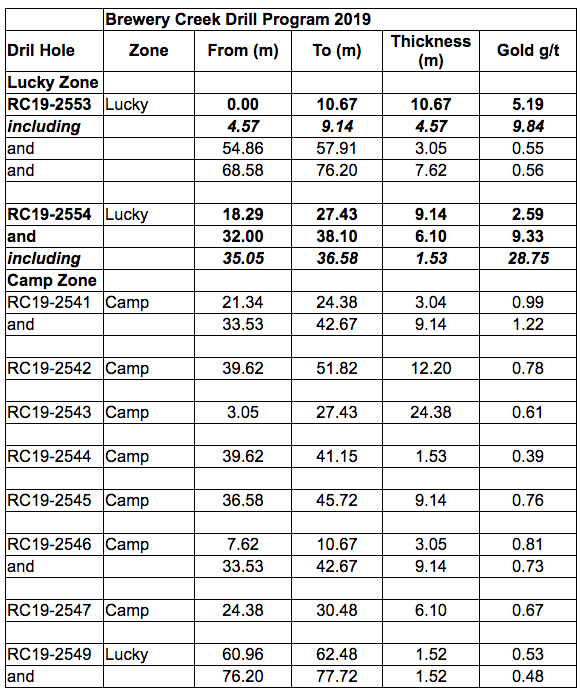 1 Significant intervals are length weighted average grades chosen based on continuity of mineralization and gold grade with composite grade exceeding 0.3 g/t gold.
All samples obtained from 88.9 mm (3.5”) diameter reverse circulation drill hole that was not split at the drill (submitted the entire sample)
2 All intervals are reported as drilled thicknesses; true thicknesses are estimated to be 70-100% of drilled thicknesses.
Brewery Creek: Exploration Program

Assays results are available for 3 reverse circulation drill holes (301.74) of 8 drill holes (813.79m) completed in the Lucky zone in July. The mineralized intercepts are presented in Table 1 and drill collar locations are shown in maps 1 and 2. Initial infill drilling to develop high grade mineralization within the 2014 PEA Lucky resource continued to return encouraging results with 9.33 g/t gold over 6.10m starting at a depth of 32 m in drill hole RC19-2554, including 28.75 g/t gold over 1.53m and 5.19 g/t gold over 10.67m from surface in drill hole RC19-2553. Assays are pending on additional drilling which has focused on the down dip extension of this these intervals in the Lucky zone. Drilling also targeted the western strike extension of mineralization peripheral to the 2014 PEA Lucky resource; drill hole RC19-2549. Assays are currently pending for an additional 33 drill holes completed in the Lucky zone to date.

A summary of the drill sample assays pending for the 2019 program to date is given below.

The Brewery Creek Mine is a licensed brownfields heap leach gold mine that was operated by Viceroy Minerals Corporation from 1996 to 2002. Brewery Creek was put into Temporary Closure in 2002 following a collapse of the gold price to below $300 US per troy ounce. Golden Predator commenced work on the project starting in 2009. Brewery Creek is now authorized to restart mining activities as defined in their Quartz Mining License and Water License. The Company intends to resume mining and processing of licensed deposits while the Company works with Tr’ondëk Hwëch’in and Yukon Government to expand the licensed mining area to include new discoveries made since 2011.

The 180 km2 property is located 55 km east of Dawson City and is accessible year-round by paved and improved gravel roads. Significant infrastructure remains in place, allowing for a timely restart schedule under existing licenses.

All analyses for the drill samples were performed by SGS Canada, Inc. with sample preparation in Whitehorse, YT and Burnaby, BC, and assaying in Burnaby, BC. Drill samples were analyzed for gold using a 30 gram fire assay with atomic absorption finish (GO FAA30V10 method). Quality control standards include standard reference material, certified blank and field duplicate samples in every sample dispatch.

Brewery Creek Mine: Licenses and Permits

The Company has a Socio Economic Accord with Tr’ondëk Hwëch’in for the Brewery Creek Mine and is licensed to resume mining activities under the current Water License and Quartz Mining Licenses. The project also has a Class IV Mining Land Use Permit to conduct additional exploration.

The technical content of this news release has been reviewed and approved by Jeff Cary, CPG, a Qualified Person as defined by National Instrument 43-101 and an employee of the Company.

Golden Predator is advancing the past-producing Brewery Creek Mine towards a timely resumption of mining activities, under its valid Quartz Mining and Water Licenses, in Canada’s Yukon. With established resources grading over 1.0 g/t Gold and low capex to production in a safe first world jurisdiction, Brewery Creek has a clear path to production as an economically and environmentally known project. Optimization studies are progressing to enhance the already positive multi-phase project economics described in the 2014 Preliminary Economic Assessment. Drilling continues to expand the open-ended resources and untested targets across the 186 km2 brownfield property located 55 km by road from Dawson City, Yukon. The Company has a Socio Economic Accord with the Tr’ondëk Hwëch’in First Nation.

At the 3 Aces project, Golden Predator continues to expand on discoveries of native gold in quartz veins while ongoing bulk sampling and processing at the 50 tpd Company-owned processing plant has demonstrated gold recoveries of over 85% using a chemical-free process. This green gold provides the gold for the mintage of .9999 gold coins from the Yukon Mint™, a wholly owned subsidiary of Golden Predator.

Neither TSX Venture Exchange nor its Regulation Services Provider (as that term is defined in policies of the TSX Venture Exchange) accepts responsibility for the adequacy or accuracy of this release. No stock exchange, securities commission or other regulatory authority has approved or disapproved the information contained herein. This press release contains forward-looking information that involve various risks and uncertainties regarding future events. Such forward-looking information can include without limitation statements express or implied regarding completion of the transactions described herein, the upcoming season at 3 Aces project, and projected grades and gold and silver recoveries from the 2018 and proposed 2019 bulk sample program, Actual results and future events could differ materially from those anticipated in such information. These and all subsequent written and oral forward-looking information are based on estimates and opinions of management on the dates they are made and are expressly qualified in their entirety by this notice. Except as required by law, the Company assumes no obligation to update forward-looking information should circumstances or management’s estimates or opinions change.