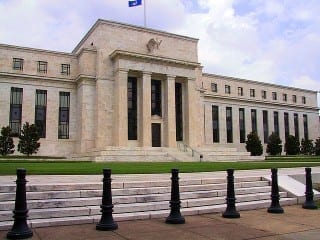 
Gold’s continued positive price performance has come even amid the release of minutes from the US Federal Reserve’s September policy meeting. Put out Thursday at 2:00 p.m. EST, they have so far failed to negatively impact the gold price.
That’s particularly positive given that prior to the release there were some concerns about what the minutes might indicate about the timing of an interest rate increase.
“The makeup of the minutes will be important to see how much, really, [interest rate] debate there was and if there were a number of members close to going the other way on the vote,” co-founder of commodities investment company Logic Advisors, told The Wall Street Journal ahead of the release.
According to CNBC, the minutes show that while the Fed “thought the economy was close to warranting an interest rate hike in September … policymakers decided it was prudent to wait for evidence a global slowdown was not knocking America off course.” Most policymakers still believe an interest rate rise will come “by the end of the year.”

Tuesday saw Marathon Gold (TSX:MOZ) release results from the latest drilling at the Marathon area, located at its Valentine gold camp in Newfoundland. Highlights include hole MA-15-070, which returned 8.98 g/t gold (cut) over 5.1 meters, including 33 g/t gold (cut) over 0.9 meters and 17.63 g/t gold over 0.9 meters.
The next day, Rockhaven Resources (TSXV:RK) put out results from 14 diamond drill holes completed at the BRX zone at its Yukon-based Klaza property. One key result came from hole 271, which returned 14.88 g/t gold and 162 g/t silver over 2 meters.
Also on Wednesday, Seabridge Gold (TSX:SEA,NYSE:SA) announced results from two more core holes completed at Deep Kerr at its KSM project in British Columbia. According to the company, the holes, which are step outs down dip from the current resource limit, “are substantially expanding the deposit in an area being evaluated for low cost, underground block cave mining.”
On Thursday, Roxgold (TSXV:ROG) provided the latest results from infill drilling at the 55 zone. Highlights include 73.9 g/t gold over 5.5 meters (4.4 meters estimated true width) in hole YRM-15-DD-368a. Drilling at the 55 zone is complete for now, and President and CEO John Dorward said that “is another milestone on the road to production.”
The same day, Pretium Resources (TSX:PVG,NYSE:PVG) reported a second set of drill results from the current regional grassroots exploration program taking place on property surrounding its Brucejack project. The company said that high-grade intersections at the Flow Dome “confirm the presence of either a new stockwork zone or an extension of Valley of the Kings.”

Monday, Avnel Gold Mining (TSX:AVK) released an updated mineral resource estimate for its Mali-based Kalana Main project. It now has a measured plus indicated mineral resource of 2.81 million ounces at a diluted grade of 2.85 g/t gold at a gold price of $1,100 per ounce. In all, 46 percent of the measured plus indicated mineral resource is classified as measured.
Interestingly, Avnel was the top gainer on the TSX last week, gaining 14.29 percent prior to the release of the updated mineral resource estimate.
Also on Monday, Rubicon Minerals (TSX:RMX,NYSEMKT:RBY) hit a snag at its Phoenix gold project in Ontario, with the Ministry of Environment and Climate Change ordering it to temporary suspend mill operations there. The company must treat elevated ammonia levels, discharge water from the tailings management facility and upgrade the facility, all within specific timelines.
Rubicon’s share price took a hit on the news — from Friday’s close of $1, it’s now down about 30 percent, just under the $0.70 level.
On a brighter note, beleaguered Eldorado Gold (TSX:ELD,NYSE:EGO) received some good news Monday. Greece’s Council of State issued injunction relief #299/2015 in favor of the Labour Center of Halkidiki and the labor unions representing its subsidiary, Hellas Gold. That means work can resume at the company’s Halkidiki project, where operations were suspended in August.