What’s ahead for the gold price next year? Analysts share their thoughts on the gold outlook for 2019 and key factors to watch.

The price of gold has sunk almost 5 percent in 2018, and did not live up to many market watchers’ predictions. In Q3, the yellow metal dipped below the US$1,200-per-ounce mark and spent a significant amount of time circling that price range.

Geopolitical concerns, consistent interest rate hikes and a rallying US dollar have kept prices down throughout the year. As of Friday (December 7), gold was trading at US$1,249.40.

With the start of 2019 just around the corner, many investors are now wondering what will happen to gold next year. Here, the Investing News Network (INN) looks back at gold’s price performance in 2018 and what analysts expect from the yellow metal in 2019.

It should come as no surprise that the gold price performed with volatility in 2018. A consistently rallying US dollar, rate hikes from the US Federal Reserve and geopolitical tensions have all put pressure on the metal, which has dropped since the beginning of the year.

As the chart below from Kitco shows, gold reached its yearly peak in January, when it hit $1,357.70. At the time, gold had edged up to its highest level since August 2016 as the US dollar hit three-year lows. The rise came after US Treasury Secretary Steven Mnuchin said he was in favor of a weaker currency. 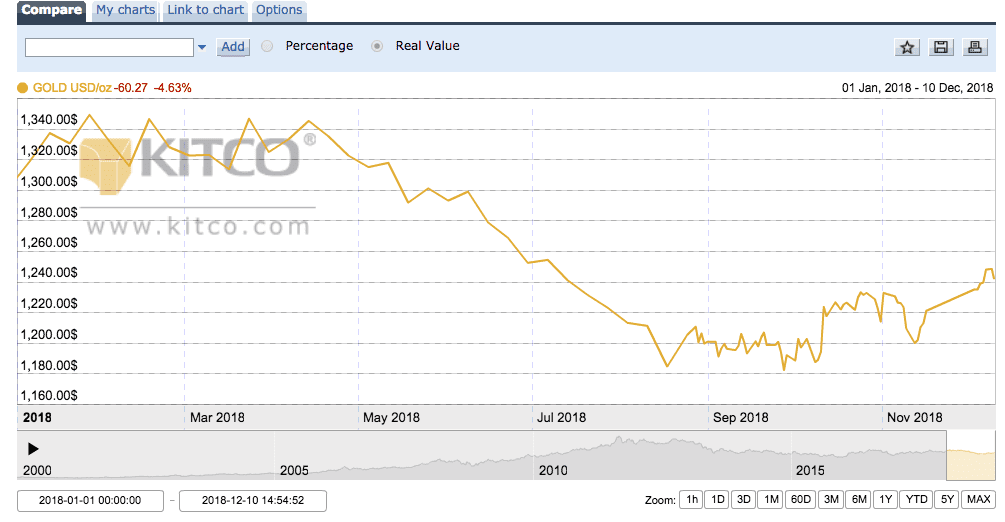 In contrast, gold’s lowest point of the year came in September, when it traded at US$1,182.40 following US economic data that supported the expectation that the Fed would continue on with steady interest rate hikes, putting the yellow metal on track for its longest monthly losing streak since January 1997.

Some market participants were expecting the gold price to increase more than it did this year, including Brian Leni, founder of Junior Stock Review, who was expecting a move higher in 2018.

“I had a number of reasons why I thought the gold price would be stronger in US dollar terms in 2018. One of the biggest reasons was related to interest rates, which I didn’t think would be raised further in the new year,” he told INN.

“I was completely wrong. Not only were rates raised, but they were raised at almost double the frequency of years past,” he added.

Frank Holmes, chief executive and chief investment officer at US Global Investors (NASDAQ:GROW), agreed, saying, “a stronger US dollar and higher real rates were serious headwinds to gold this year.”

Alain Corbani, head of commodities at Finance SA, believes that the lagging gold price seen in 2018 was the result of a “gold cycle problem.”

“We started this cycle three years ago. It’s going to last another few years. We should enjoy it,” he noted.

For Martin Murenbeeld, president of Murenbeeld & Co., there were three main items that affected the price of gold in 2018.

“Number one, the US dollar went up; number two, the equity markets went up; number three, the real bond yield went up. And we look at the 10-year US TIPS, and it rose as well — so those are three big strikes against gold,” he told INN in October.

Meanwhile, Glenn Mullan, president of the Prospectors & Developers Association of Canada, noted that regardless of why gold went down, it was doomed once investors lost interest.

“Commodity price trends typically set the stage for sector activity, and with gold shedding nearly US$100 per ounce since January, it has created a tougher environment for explorers and miners to generate new investor interest,” he said.

Despite the various factors that caused the price of gold to dip throughout most of the year, many analysts believe that the yellow metal actually held its own. In their opinion, the metal could have landed in a worse position given what was stacked against it.

“I think that the gold price, in US dollar terms, has held up remarkably well in the face of a very strong US dollar and the rapid pace with which the Fed has raised interest rates,” Leni told INN.

Similarly, Holmes acknowledged that gold could have sunk lower in 2018. “I must point out, though, that gold actually performed exceptionally well despite the setbacks,” he stated.

He added, “you would expect higher rates to push the price of gold down to US$700 an ounce or lower, but it managed to find support around US$1,200.”

2018 has been driven by geopolitical tensions, steadily increasing interest rates and a strong US dollar, leaving many investors to believe that the gold price has reached its bottom. So what will happen to the yellow metal in 2019?

Looking ahead, Leni is once again relying on interest rates to determine where gold might go next year. “Where is the gold price headed in 2019? Interest rates are, again, key to my predictions on the direction of the price. While I was wrong last year in my assumption that the Fed wouldn’t raise rates, I’m going to go out on a limb and say that they won’t raise rates further in 2019.”

He continued, “therefore, outside of an all-out market crash — which, in the short term, would lower the price of just about everything as it did in 2008 — I believe 2019 will see higher gold prices.”

On the same note, Murenbeeld would not be surprised to see the Fed rein in its interest rate hikes. “It’s possible that later in 2019 the Fed starts to worry a little bit more about recession and starts to maybe even draw a halt to the continuing rise in interest rates,” he told INN.

Investment bank Goldman Sachs (NYSE:GS) is also in favor of the yellow metal rising in 2019. In addition to a halt in Fed hikes, the bank says that investors should pay attention to where US growth is headed next year.

Give me my free report

“We see diversification value in adding gold to portfolios. If US growth slows down next year, as expected, gold would benefit from higher demand for defensive assets,” analysts at the firm said.

“At this stage of the business cycle, gold may be particularly appealing as a portfolio diversifier given that long-term bonds, traditional safe-haven assets, may be hurt if US inflation surprises to the upside.”

Additionally, what happens to the US dollar next year will be crucial for gold’s performance, as a softer greenback makes commodities priced in dollars cheaper for investors using other currencies. Many analysts see a dipping greenback next year, with the precious metal returning to its safe-haven nature.

He added, “we’ve got to come to some kind of a resolution to that. And the only way out of this particular conundrum is if you can have some kind of international agreement that would devalue the dollar.”

Corbani agreed with Murenbeeld’s statement on the direction of the dollar, stating, “I do believe that’s [where] we are going.”

While the analysts did not give a specific number for where they see the price of the yellow metal heading in 2019, Murenbeeld did note, “it’s very possible that in three or four years we’re going to be looking at maybe US$2,000 gold, something like that.”

Firms polled by FocusEconomics estimate that the average gold price for 2019 will be US$1,280. The most bullish forecast for the year comes from Pezco, which is calling for a price of US$1,435; meanwhile, BNP Paribas is the most bearish with a forecast of US$1,145.