Australia is home to approximately 10 percent of the world’s economic gold resources, and is ranked third after South Africa and the US. It is also the world’s third-largest producer.

This article was originally published on Gold Investing News on September 23, 2010. 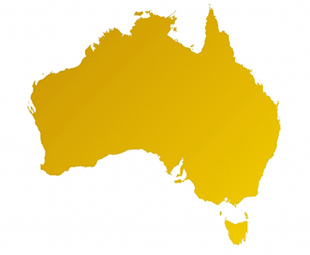 Gold was first discovered in Australia in the early 19th century; however, there was no concerted effort towards mining due to an old English law that demanded all gold and silver remain the property of the Crown.
When many Australians migrated to the United States in 1849 following reports of rich gold discoveries in California, the New South Wales Government realized that if the wave of migration was to be reversed, it needed to provide incentives for Australians to find gold in their own country. Accordingly, the government starting offering rewards for the discovery of “payable” gold.
Australia is home to approximately 10 percent of world economic gold resources and is ranked third after South Africa and USA. It is also the world’s third largest producer. About 60 percent of Australia’s gold resources are located in Western Australia, with the remainder in all other States and the Northern Territory. Virtually all resources occur in primary deposits, many of which have undergone some degree of weathering. Weathered primary deposits are important to the gold industry because they are usually easier and cheaper to mine and the gold is easier to recover.
Most of Australia’s gold production comes from open-pit mines. Underground mining is used where the depth of ore below the surface makes open-cut mining uneconomical. Vertical shafts and declines (spiral tunnels) are used to move people and equipment into and out of the mine, to provide ventilation and for hauling the waste rock and ore to the surface. Deep extensions of deposits mined by open pit methods may be mined later by underground methods beneath the old open pit.


Grab Your Free Report!
Western Australia’s gold deposits are hosted by greenstone belts located in the Yilgarn Craton. Gold deposits are generally hosted by north northwest trending structures, which host gold in steeply dipping lenticular ore bodies, similar to deposits in Zimbabwe, Tanzania and Ghana.
Gold mineralization is widely distributed throughout the greenstone belts, which also contain important deposits of nickel sulphides, nickel laterites and base metals. The Yilgarn Craton has been informally subdivided into four provinces: (1) the Eastern Goldfields Province, containing the important Norseman-Wiluna Belt; (2) the Southern Cross Province; (3) the Murchison Province; and (4) the Western Gneiss Terrains.
The first three regions are granite-greenstone provinces, while the Western Gneiss Terrain consists of higher-grade metamorphic gneiss complexes.  Gold deposits are overwhelmingly located within greenstone belts in the granite-greenstone provinces. The highest concentration of gold deposits is within the Eastern Goldfields Province, especially within a graben-like north-north-west corridor of distinctive rock types, including tholeiites, calc-alkaline volcanics and komatiites, known as the Norseman-Wiluna Belt.
The granite-greenstone provinces are further divided according to their rock-types.  The geology of this region is complex, due to the current thought that the Craton was formed when various terrains of different origins collided together, forming what is referred to as an accretionary prism.  Most gold deposits in the Yilgarn Block are classified as mesothermal ores, reflecting emplacement at moderate crustal depths, in contrast to shallower epithermal deposits of younger terrains. They form a coherent group with a number of common features. These include structural control, gold-only type, distinctive wall-rock alteration haloes and greenschist to amphibolite metamorphic grade. Greenstone host rocks are mainly ultramafic, mafic and felsic volcanic rocks and iron rich sedimentary rocks.

The Super Pit is a prime example of a world-class deposit. Based in Kalgoorlie, Western Australia, it’s the biggest gold open pit mine in the country. Super Pit produces up to 850,000 ounces of gold every year and its operation far outweighs any other mining center in Australia. Most of the gold mined in the Super Pit occurs within ore lodes formed by ancient shears in a rock unit called the Golden Mile Dolerite. There are over 2,000 ore lodes that occur within the Golden Mile dolerite and are found in an area over 5 kilometers in strike and 2 kilometers in width, occurring to a depth of over 1 kilometer.
The ore lodes vary in size from centimeters to several hundred meters in length and dip.  All of the lodes that can be economically mined from the Super Pit must be greater than 10 meters in length and 6 meters in width. The Super Pit is managed by Kalgoorlie Consolidated Gold Mines (KCGM) and owned 50/50 by Newmont Australia and Barrick Gold Corporation (NYSE:ABX; TSE:ABX).

4 responses to “Gold Mining in Australia”