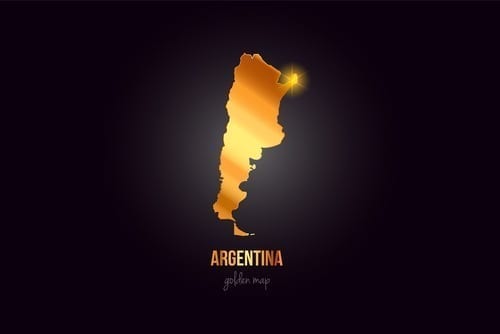 Is now the time for gold mining in Argentina? Read on for a breakdown of where the region has been and where it may be going with gold.

With Mauricio Macri’s pro-business government now over, investors may want more clarity around the gold space in Argentina and whether it’s still the right time to invest in the underexplored region.

Historically, Argentina was one of the world’s wealthiest countries 100 years ago; however, it suffered during most of the 20th century from recurring high inflation, mounting external debt, economic crises, persistent fiscal and current account deficits and capital flight. The country is now classified as upper-middle income or a secondary emerging market by the World Bank.

Argentina benefits from rich natural resources, a highly literate population, a diversified industrial base and an export-oriented agricultural sector. While it is arguably more renowned by investors for its oil and gas exports, the country also possesses vast mineral wealth in gold, copper, silver, zinc, magnesium, lithium, sulfur, tungsten and uranium.

The development of investor-friendly mining laws since 1993 has resulted in a growth of Argentina’s mining exports from US$70 million in the early 1970s to over US$6 billion in 2009.

Additionally, in terms of land size, Argentina is the second-largest nation in South America. It ranks third among the largest producers of gold in South America behind Peru and Brazil.

Despite this, Argentina’s gold mining potential has barely been explored thanks to government policies that tend to discourage the exploration and production of several minerals, including the yellow metal.

However, when Mauricio Macri’s government took power late in 2015, Argentina slowly started to make strides to introduce more mining and attract more miners. One of the main developments that Macri made was the creation of a unified exchange market and floatation of the peso, allowing foreign companies to send money to Argentina.

In fact, Argentina may soon be host to its first major resource development project in more than 20 years. Global mining heavyweights Yamana Gold (TSX:YRI,NYSE:AUY), Newmont Goldcorp (TSX:NGT,NYSE:NEM) and Glencore (LSE:GLEN) announced on March 7, 2019, that they are considering the joint development of the Agua Rica gold-copper project, which has estimated reserves of 6.5 million ounces of gold and 4.5 million metric tons of copper.

A feasibility study slated for completion in 2020 is expected to look at the viability of combining Glencore’s Alumbrera gold-copper mine with Agua Rica for annual production of 236,000 metric tons of copper equivalent metal for at least the first 10 years of the estimated 25 year mine life.

Mining is a highly developed industry in neighboring Chile, which ranks sixth on the Fraser Institute’s 2018 annual mining survey. Argentina is more of a frontier jurisdiction with plenty of upside given the vast swaths of its territory that remain underexplored.

The South American nation may not rise to the rank of Chile, but geologically speaking Argentina is just as well endowed. Both countries share the Cordillera mountain range, which has helped Chile birth more than 400 mines. In Northern Argentina, this same structure has fathered numerous gold and copper porphyry systems.

As previously mentioned, Argentina’s emerging mining industry benefited greatly from the pro-mining policies instituted by the Macri administration. Between 2015 and 2018, exploration budgets grew by 92 percent to US$250 million alongside a 30 percent increase in mining projects. The country currently exports around US$4 billion in metals production annually.

Much of this growth can be attributed to Macri, whose policies were created with the intent of attracting foreign investment to the nation’s mining sector. From the beginning of his presidency, Macri attracted foreign mining companies with benefits for exploration projects and mining operations.

Macri is also responsible for ending currency controls, eliminating a 5 percent export tax on metals, lifting a ban on companies sending profits overseas and instituting value-added tax refunds. The former president also improved relationships between the mining industry and the nation’s provinces, which are legally prohibited from creating and enforcing their own mining laws at the provincial level. In 2017, Argentina’s federal government and 20 provincial governors signed a mining agreement with the goal of systematizing taxes and regulations.

In addition to Yamana, Newmont Goldcorp and Glencore, there are several other gold miners from across the globe that have begun exploring for Argentina’s largely untapped mineral assets. For example, Barrick Gold (TSX:ABX,NYSE:GOLD) operates the Veladero gold-silver mine and McEwen Mining (TSX:MUX,NYSE:MUX) has a joint venture (49 percent/51 percent) with Hochschild Mining (LSE:HOC) in the San José gold-silver mine.

Although the yellow metal is growing in prevalence in Argentina, there is also an influx of copper-focused exploration and development projects in the South American country. McEwen owns the Los Azules copper porphyry property, one of the world’s largest undeveloped high-grade open-pit copper projects. First Quantum Minerals (TSX:FM,OTC Pink:FQVLF) holds the US$3 billion advanced-stage Taca Taca gold-copper project.

Although Macri managed to build up Argentina’s mining industry — and its gold space in particular — he was voted out of office in October of 2019, when Alberto Fernandez became the new president-elect.

Following the election, INN spoke with Remi Piet, senior director at Americas Market Intelligence, in order to glean what could happen with the South American country’s mining space now that one of its biggest supporters would no longer be running the region.

As Argentina is now in a period of transition, it will be important to help the country’s mining industry rebound from the downturn it took during the election season. Piet noted that the results were not surprising and that it would be in Fernandez’s administration’s best interest to support mining, because other sectors within the Argentinian economy might suffer due to the International Monetary Fund backing away from deals previously made under Macri’s rule.

Piet said that some banks may not be interested in financing projects in Argentina, suggesting that those focused on infrastructure may face the most risk.

That said, he does believe that under Fernandez the country’s mining sector will still enjoy elevated importance.

“Because of the potential decrease in foreign investment in other sectors, there will be a strong incentive for Alberto Fernandez to favor natural resources and extractive industries in Argentina,” Piet added.

VIDEO — Adrian Day: The Market has Changed, it’s Not a False Start for Gold
Zinc Exploration in the Mining-friendly Jurisdiction of Spain
South Africa Still Uncertain as Mines Prepare to Reopen
3 Top Canadian Cobalt Stocks of 2020