Markets have become jittery over the impending deadline on, once again, raising the US debt ceiling, and that could be bullish for gold. 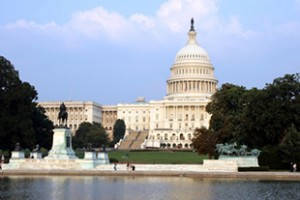 Gold traded in a relatively thin band of around $12 this week, with little news to propel the precious metal up or down.

That compares to last Wednesday’s market-moving Fed decision not to taper quantitative easing, which drove the gold price up around $60 — or the highest one-day jump since June 1, 2012, according to USA Today.

In the wake of the decision, however, gold was not able to keep the momentum, with the familiar malaise setting in on Friday after St. Louis Fed President James Bullard said the US Federal Reserve’s $85-billion-a-month bond-purchase program could still be scaled back next month. Gold investors were spooked by the statement, and the metal fell over $40.

Gold continued to drift down at the beginning of the week, ending the day on Tuesday at $1,325.20, with a lack of major geopolitical developments or economic news to guide traders. Things changed a little for the better on Wednesday, however, when a fresh round of short covering and bargain hunting pushed gold futures up $19, to $1,335.30.

That same day, the market had a new development to digest in the form of another familiar bug-bear, the US debt ceiling. Readers will recall how in 2011, the US government was nearly brought to its knees over internal squabbling about the need to raise the debt ceiling or face catastrophic bankruptcy. While the crisis was averted through a complex agreement to raise the ceiling and reduce increases to government spending, the debt ceiling will again be reached in just three weeks’ time. And once again, the government is staring at a potential shutdown if it does not pass a budget.

US Treasury Secretary Jack Lew is urging Congress to raise the United States’ $16.7-trillion debt ceiling, and warned that “[e]xtraordinary measures will be exhausted no later than October 17,” Bullion Vault reported. The gold price “could receive something of a bid over the short-term,” Bullion Vault quoted INTL FCStone’s Edward Meir as saying, ”as worries rise over the debt ceiling talks.”

Kitco’s Jim Wyckoff was more circumspect, noting that the debt ceiling “could be significantly bearish for most markets in the coming weeks.” “The question for gold traders is whether the yellow metal would follow the raw commodity sector and sell off, or act like a safe-haven asset and rally, if the U.S. government shut down,” Wyckoff wrote.

Anglo American (LSE:AAL) has settled a claim for compensation by 23 gold miners, “bringing an industry-wide deal potentially worth hundreds of millions of dollars closer,” Reuters reported. Eight of the claimants have already died of silicosis, a disease cause by inhaling silica dust from gold-bearing rocks. Details of the settlement are confidential.

Peru has approved the environmental and social impact statement for the Ollachea gold mine, allowing it to advance to the construction phase. A feasibility study estimates that the mine will produce 920,000 ounces of gold over an initial nine-year life. Minera IRL (LSE:MIRL,TSX:IRL) expects to start construction in 2014 and to bring the mine into production in 2015, the company said in a press release.

The Globe and Mail reported that Barrick Gold (TSX:ABX,NYSE:ABX) will continue to develop Pascua Lama, its huge South American gold project, even though the Chilean Supreme Court ruled this week that the Canadian company must complete a water-management system that is approved by the government. A lower court in July froze construction of the $8.5-billion mine until Barrick installed proper infrastructure to prevent water pollution.

Exeter Resource (TSX:XRC) is planning to rework its plans to mine the Caspiche copper-gold porphyry in Chile, reported Mineweb’s Lawrence Williams. The company had originally planned to open pit the huge mine, located high in the Andes, at a whopping $4-billion capex, but due to today’s market conditions, lowered its expectations of finding a deep-pocketed partner in the project. Instead, said Williams:

“Exeter’s new approach for Caspiche is to assess options for open pit mining the near surface oxide zone (as in the original project revision), but then with subsequent underground mining of a central, higher grade portion of the underlying gold/copper sulphide deposit rather than open pit it with the enormous construction costs that that would have involved.”

Storied resource investor Eric Sprott has come to the aid of Barkerville Gold Mines (TSXV:BGM) with a term sheet loan of $15 million, the beleaguered BC gold junior announced on Thursday. Barkerville generated considerable excitement back in June 2012, when it said its Cow Mountain property contains 10.626 million contained ounces of gold in the indicated category. The news doubled Barkerville’s stock price, but it wasn’t long before some observers questioned the numbers because they differed considerably from previous historical drilling estimates.

That caught the attention of the BC Securities Commission, which upon examination of the technical report, issued a stop trade order — it remains in effect. However, Barkerville said in its press release that it expects to be allowed to start trading on or about Octover 4, the same time it receives the funds from Sprott.

Orefinders Resources (TSXV:ORX) identified multiple high-grade gold targets on the MZ claims at the Mirado project in Ontario through the ongoing bedrock mapping and sampling program. Surface samples returned gold results ranging from 0.028 grams per tonne (g/t) up to 137 g/t (with the second-highest sample returning 65.5 g/t) in outcrops located approximately 700 meters along strike from the Mirado gold deposit.

Top Stories This Week: Tesla Gears Up for Battery Day, 3 Silver Stock Picks
8 Stock Picks for US$50 Silver
Which States are Voting on Cannabis in November?
Why Investors Should Care About Tesla’s Battery Day