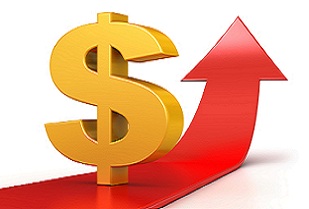 Adding an extra push to gold was a declining dollar index. The index, which compares the performance of the greenback to a basket of other major currencies dropped to 78.957 from 79.688 on Friday, making the dollar-backed metal cheaper to buy in other currencies. Lately, gold has been falling as the Eurozone crisis has deepened, and the US dollar, in turn has been acting as somewhat of a “safe haven.”

The optimism in the Eurozone was sparked by reports that German Chancellor Merkel and French President Sarkozy are in talks to create more fiscal unity among the Eurozone, and are discussing a deal to make fiscal rules legally binding, allowing authorities to enforce fiscal discipline, according to the Wall Street Journal. The hope is that by making the fiscal rules legally binding, that the European Central Bank will then feel more confident about becoming the lender of last resort by buying more sovereign bonds for an extended period of time, something the central bank was reluctant to do because it thought struggling countries would have less impetus to implement austerity measures.

Over in the US, record Black Friday weekend sales lifted retail stocks and the broader markets on Monday. On Black Friday, which usually accounts for about 10 percent of retailers’ holiday sales, made for a strong start this year, according to analysts. Shoppers hit stores in greater numbers on Black Friday, increasing 6.6 percent from last year to 226 million, according to the National Retail Federation. The S&P Retail Index rose 3.4 percent to 517.28 in its biggest one-day percentage gain since August. Higher retail figures indicate improved consumer sentiment, and improving consumer sentiment is instrumental to the recovery of the world’s largest economy.

In addition to the improved stability in the Eurozone, and improving consumption data, strong physical buying boosted the gold market. The SPDR Gold Shares (GLD) now holds almost 1,300 tonnes. According to a recent note by Barclays, Exchange Traded Products grew more than 7 tonnes last week taking total metal to a fresh record at 2,273.5 tonnes. “We are bullish and look to buy against the $1,600 area. A break above resistance near $1,736 would confirm our view and open our targets near $1,803 and then the $1,840 area.

Still, there is some caution that gold’s recovery is due to short-covering. In the most recent commitment of traders report for the week ended November 15th, (the latest report was delayed due to the US holiday) investors added 13,000 total long contracts and 17,000 short contracts, suggesting short-covering is behind the rally.

Analysts also cautioned that the precious metal’s recent gains could be short lived, as concerns about the Eurozone’s debt crisis have not gone away, but are only pacified at the current moment. Moody’s Investors Service warned on Monday the rapid escalation of the Eurozone sovereign and banking crisis was threatening the credit standing of all European government bonds.  Gold, which hit a record $1,920.30 in September, is up more than 20 percent in the year-to-date, and is trading flat so far in November.

US Gold Corporation (NYSE:UXG) announced on Monday that it has completed a preliminary feasibility study on its Gold Bar mining project in Nevada. The study indicates that the mine could potentially produce 51,000 ounces of gold annually over an eight-year period at cash costs of $665 an ounce. Initial capital expenditure at Gold Bar is expected to be about $56 million, while the study outlines total capital expenditure of about $95 million over the life of the mine. US Gold said it intends to go directly to the permitting phase and move toward production as quickly as possible.

Securities Disclosure: I, Leia Toovey, hold no direct equity interest in any company listed in this article.