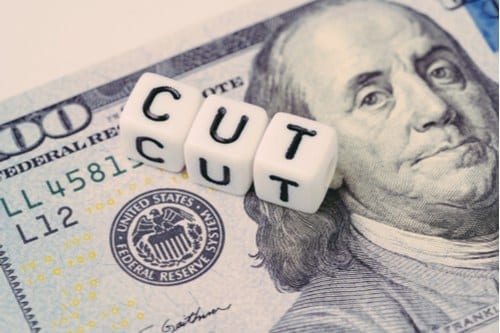 The central bank has reduced its benchmark funds rate by an additional 25 basis points to a new range of 1.5 to 1.75 percent.

After days of speculation, the US Federal Reserve cut interest rates for the third time in four months, reducing its benchmark funds rate by an additional 25 basis points.

The move impacted gold prices, which started the day trading at US$1,489 per ounce and climbed to US$1,494 in the moments prior to the cut. However, within 30 minutes of the decision the yellow metal had slipped to US$1,487, trending lower.

Fed Chair Jerome Powell cited strong jobs data from September, improving relations between China and the US and declining risk of a no-deal Brexit as factors that impacted the committee’s decision.

In a release, the committee noted its mandate of fostering maximum employment and price stability.

“In light of the implications of global developments for the economic outlook as well as muted inflation pressures, the committee decided to lower the target range for the federal funds rate to 1-1/2 to 1-3/4 percent,” the missive reads.

“This action supports the committee’s view that sustained expansion of economic activity, strong labor market conditions, and inflation near the Committee’s symmetric 2 percent objective are the most likely outcomes, but uncertainties about this outlook remain.”

While the Fed has not ruled out another cut after its December meeting, Powell stated that it will continue monitoring slowing global growth and trade policy developments.

The Fed and Powell have been a routine target of Twitter tirades from US President Donald Trump, who was critical of the central bank’s decision to cut interest rates twice earlier this year.

Ahead of Wednesday’s (October 30) cut, the president voiced his disdain for the Fed’s previous moves.

The Federal Reserve is derelict in its duties if it doesn’t lower the Rate and even, ideally, stimulate. Take a look around the World at our competitors. Germany and others are actually GETTING PAID to borrow money. Fed was way too fast to raise, and way too slow to cut!

While the US leader is likely not pleased with the latest rate reduction, analysts see the move as a positive for the economy.

“The Fed doesn’t directly control the long-end of the curve, so they can’t do much there except try to fine-tune monetary policy to support economic growth and reasonable inflation levels (which is asserting indirect influence),” Jason Ware, partner and chief investment officer at Albion Financial, told Reuters immediately following the news.

He continued, “For it’s those two factors — growth and inflation — that ultimately determine longer-term interest rates. Over the short-run, it’s also the natural emotions of fear and greed among investors that move long-term bond yields but this is outside of anyone’s control so it’s moot to consider.”

The vote to again cut rates was not unanimous: two of the 10 committee members voted against it.