Gold is ultimately expected to perform well whoever wins the election — a minor positive in a sea of doubt.

Uncertainty was the word of the day on Wednesday (November 4) as ballots continued to be counted in one of the most publicized elections in modern history.

Americans hoping to know who the 46th president will be were met with indecision the morning after as tabulations remained underway in key battleground states.

As it usually does, gold edged higher amid the volatility, but its gains were muted by a rising US dollar.

After climbing to a six week high of US$1,913 an ounce on Tuesday (November 3) afternoon, election day pressure pushed the metal below US$1,900 after hours. The decline continued as the polling results made it obvious a clear winner would not emerge in the hours after stations closed.

Dipping to US$1,886 in pre-trading hours, then surging back above US$1,900 as markets opened, gold is expected to perform well no matter who wins the election — a minor positive in a sea of doubt.

The delay in results could last well into the week and beyond, thanks in part to record-setting voter participation. According to the non-partisan US Election Project, of the approximate 239 million eligible American voters, as many as 160 million votes were cast.

Early votes accounted for around 100 million ballots, a number that has ballooned from 58 million in 2016. The increase is largely due to the ongoing impact COVID-19 is having in the US. To date, 9.4 million Americans have contracted the virus at some point and 233,000 have lost their lives.

This year’s voter turnout is anticipated to come in at 67 percent of the electorate, the most engaged populous since 1908, when 65.7 percent of those eligible voted.

Despite the delay in official results, Twitter (NYSE:TWTR) was ablaze with commentary from the current president, who denounced the ongoing count, implying that “mail-in ballots” (absentee ballots) were being found all over battleground areas.

How come every time they count Mail-In ballot dumps they are so devastating in their percentage and power of destruction?

It’s not my place or Donald Trump’s place to declare the winner of this election. It’s the voters’ place.

Biden also took an optimistic stance, tweeting he believes he will ultimately win.

We feel good about where we are. We believe we are on track to win this election.

Analysts and market watchers weighed in on the still-evolving results and the potential outcomes as well. Gold and silver analyst Dan Popescu warned of another prolonged period of uncertainty.

A 3 months period of risk was evident during the US presidential transition but now you need to add uncertainty. Financial markets and business hate uncertainty and for good reasons. pic.twitter.com/4v9krsMj5e

Popescu is also concerned about the long-term devaluation of the US currency.

The greenback dropped to a year-to-date low at the end of August and has continued to face challenges. Quantitative easing and money printing by the US Federal Reserve have been described as catalysts for the dollar’s downward descent. 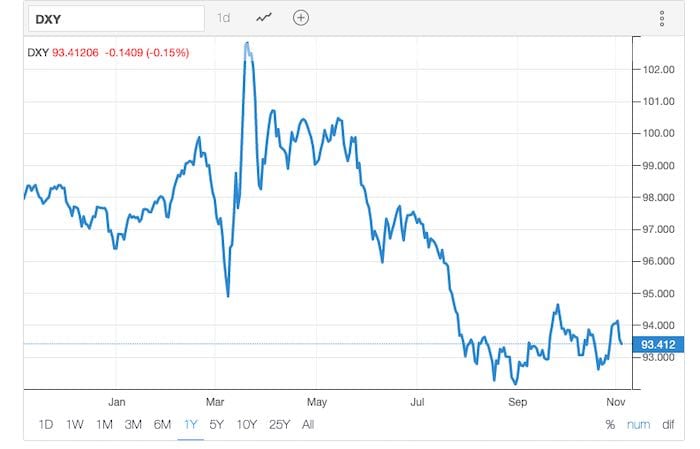 US dollar chart via Trading Economics.

Outspoken analyst Peter Schiff of Euro Pacific Capital compared the upside in gold to the downside risk of the dollar.

The US dollar is expected to face more challenges when a stimulus package finally gets approved by Congress. The impact of a second stimulus effort could be heightened this week after the Fed concludes its fall meeting on Thursday (November 5).

What about the silver price?

As gold struggled to edge higher and the dollar floundered, silver has added to its value steadily since the beginning of the month. Following a challenging October that saw the white metal continuously trend lower, its price increased by as much as 3.3 percent month-over-month.

Hitting a five week high of US$24.39 per ounce just before markets closed on Tuesday, after-market trading added pressure to the metal, sending it as low as US$23.39 before a rebound set in.

Rising to US$24.03 ahead of the morning bell, the election hangover weighed on the sector, pushing prices down. Since silver plummeted to a four year low of US$12.59 in March, the white metal has outperformed its golden sister, adding 131 percent at its peak to reach US$29.14 on August 10.

On the other hand, when gold surged to an all-time high of US$2,063 in August, it was only a 32 percent year-to-date increase, evidencing that silver is outperforming gold, like many analysts have noted.

There is also still upside in the white metal’s ascent higher. As Peter Spina of GoldSeek pointed out, sales of silver eagle coins by the US mint for the first three days of November were up 257 percent compared to the same period in 2016.

Americans were not just buying guns aggressively, US Silver Eagles are flying out of the vault: https://t.co/AOLLOzMS9v

As of 3:05 p.m. EST on Wednesday, Biden was leading with 237 of the projected electoral college votes compared to Trump’s 213.